An Underprivileged Life Against Cowards With Guns.

Unarmed black man shot fatally in the back by cop. It’s not just a movie. It’s reality. Over and over again. This injustice has become so common in United States culture that there is an undeclared war between African-American men (who continue to be black) and cops (who continue to be cowards).

FRUITVALE STATION recounts the last hours of Oscar Grant, a 22-year-old African-American who was shot to death in the early hours of January 1, 2009, on a Bay Area Rapid Transit (BART) platform at Fruitvale, Oakland California by a 33-year-old transit cop named Johannes Mehserle. Mehserle first claimed he thought his gun was his taser, and then that he “feared for his life” that Grant – who was pinned to the ground by Mehserle himself leaning on Grant’s back, and another cop with his boot on Grant’s neck – was “going for a weapon.”

We can tell from the numerous cellphone videos of the incident that Mehserle is lying his ass off.

Exactly how gutless ARE you, Mehserle, you low-browed incompetent? You’re a loser either way: If you planned to shoot him, you’re a coward; if you thought it was a taser, you’re an untrained coward.

But FRUITVALE STATION contains none of that mitigating information on Mehserle; matter of fact, Mehserle is never mentioned, and there is no character by that name. The movie does not exist to absolve the cops or castigate them; nor does it re-litigate the case of Oscar’s unnecessary murder. It simply shows us the events. We all know who’s right and who’s wrong. The true horror of this story is not addressed: the sociological disparity that pits these two factions against each other. Not white against black, but rich against poor. (The police are, after all, instruments of the rich, supposedly “protecting and serving” everyone equally, but in practice, affording the wealthy a pass on every sin, including murder, and bringing the hammer down on petty crime, to wipe it from the sensibilities of the high-end criminals they work for.) The further down the social scale you are, the harder it is for police to treat you with the respect they afford their pimp funders.

FRUITVALE avoids this intrinsic societal disease, and focuses on humanizing Oscar Grant (played by a magnificent Michael B. Jordan (CHRONICLE), underplaying like there is no camera on him at all). Like Darren Aronofsky, writer-director Ryan Coogler’s Steadicam perches on Oscar’s shoulder as he goes about his underprivileged life. On this last day of 2008, Oscar has decided to turn over a new leaf, trying to better himself for his mother (Octavia Spencer, THE HELP), his girlfriend Sophina (Melonie Diaz, HAMLET 2) and his little girl, Tatiana (Ariana Neal). He’s also trying to plead back the grocery store job he just lost, and he’s cutting off his dope-dealing contacts, actually throwing away a stash instead of selling it. There is even a moment that seems to illustrate how futile all his efforts might prove to be, as he saves a run-over dog in the street, only to watch it die slowly as there is nowhere to take it for aid.

Is it true? Is this how Oscar actually spent his last day on Earth, or is Coogler simply stacking the deck? And why does he need to humanize the victim? Simple: Oscar Grant is made to look like a saint because to admit even the tiniest flaw would make it seem like the aggression toward him was justified. (Witness how every unarmed young black man shot dead by cops suddenly has his rap sheet splayed all over the evening news, to justify his illegal death at the hands of untrained and/or racist cowards.) Grant was a small-time thief, a drug-dealer, a guy who cheated on his girlfriend… you know, a normal human being. I do not cite these traits to condemn him, but to – ironically – actually humanize him. Yet even if Oscar Grant was a felon, ethics and morality and justice all denote that you don’t shoot to death an unarmed man who is down on the ground with another cop’s knee on his neck.

Would the cops treat a Caucasian congressman that way after it is discovered the congressman wrote and passed laws that indirectly killed low income citizens by denying them food stamps, housing, healthcare and the right to vote? And that’s happening every day in Whitey Republican Congress.

So we know that Coogler is playing fast and loose with facts about Oscar’s ethos, his actions and his background. A piece in Forbes delves into details. And the MintPress News goes in the opposite direction, interviewing a cop who takes an apologist stance for the police (no surprise).

But look at it this way: even Coogler’s smoothing of Oscar’s rough edges is unwittingly a straw man argument – because the pertinent fact remains that Oscar was shot to death during a routine apprehension. And even if it was totally an accident on the part of the cop, even if it was not about Mehserle’s probable racist upbringing (they put the clearly-heard racial slurs from the videos – “bitch-ass nigger!” – in the mouth of the biggest “name” actor in the cop cast – Kevin Durand), even if it was not about what transpired on Mehserle’s shift that day to lead him to that level of discombobulation – even if all that was justifiable! – the fact remains: Oscar still lies dead. Shot in the back.

It might not contain any solutions on rectifying social disparity, but FRUITVALE does show us the results of being so poor. Everything is about money – that Oscar doesn’t have and cannot get. Browbeaten by his girl to provide for his family and be a good father, yet no idea where his next income will materialize, living in a neighborhood with sirens always in the distance, having done jail time 2 years ago, and trying to make his mother proud by following the straight and narrow, we feel Oscar’s pain, sharp as a stab every time he must buy some small item, money going, going… And seemingly no way he can earn money without doing something illegal or unethical. His end of society is just not structured to provide enough legal income to support a family and enjoy a quality of life.

Amazing that FRUITVALE STATION is Ryan Coogler’s debut feature film (reaping awards at Sundance and Cannes), tackling such a loaded subject and then displaying such finesse in unpacking it. His unobtrusive cameras allow for great naturalistic performances, especially by the three principals; Jordan is in a league of his own, ably supported by Diaz. Then there is Octavia Spencer, whose poignant performance is made all the more heartbreaking by her blaming herself for her son Oscar’s death, having told him to “take the train” into the city, so as not to drink and drive, and he – surprisingly – heeding her advice. “I thought he would be safe…” Turns out he was least safe from the people who are supposedly sworn to protect and serve him. It’s just a slogan on the side of police cars; it’s not a directive or a law… 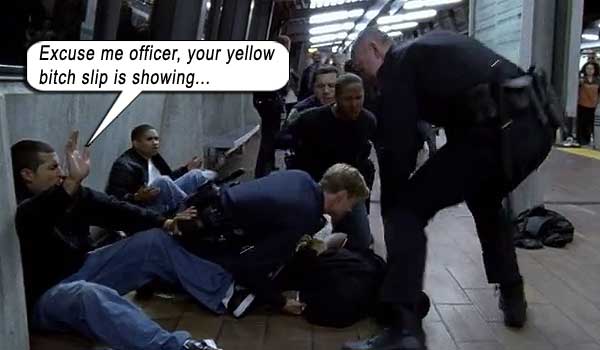 Responding to a report of a disturbance on the BART station, the cops haul Oscar and his friends off the train and line them up sitting on the ground, amidst racial epithets, confusion, abusive manhandling – and innumerable passengers rolling their cellphones and protesting the cops’ small-dicked aggression towards Oscar’s party.

The altercation is so well-staged, when the shooting happens, it is almost incidental. Like Stone in JFK reconstructing the Zapruder footage and adding other angles, Coogler reconstructs the scene from all the cellphone footage made public. We see the cop with his bodyweight on Oscar’s back (we presume this is Mehserle, who is unnamed and unfeatured, just a canary blonde), and Kevin Durand’s cop with his knee on Oscar’s neck. When the gun goes off, there is a sickening second of silence (if we believe this is cinematic license, it is not – we also witness this silence in the videos! I guess it’s how humans react to a gunshot during heightened aggressive situations), and Oscar cranes his neck back in stunned disbelief, as his life bleeds through his teeth, “– the fuck? You shot– You shot me brah…”

“After firing the officers involved, the general manager and chief of BART stepped down.”

“The officer who shot Oscar was arrested and charged with first-degree murder. After claiming he mistook his gun for his taser the jury found him guilty of involuntary manslaughter. He was sentenced to two years at state penitentiary and released after 11 months.”

Not a bad sentence for a first degree murder. Musta had a good white lawyer. You know that phrase “criminals walking the streets”? Well…  And you also know that line from that Rolling Stones song, “Just as every cop is a criminal…”