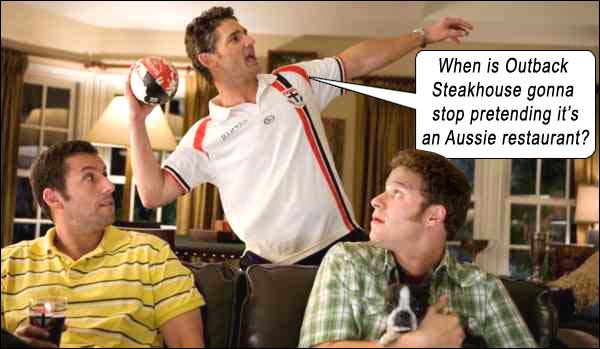 FUNNY PEOPLE is the best movie Adam Sandler has ever made. Because it’s a Judd Apatow movie. In it, he offers us his vulnerable “human” character (as he did in SPANGLISH, REIGN OVER ME), not his insufferable, jutting-jawed imbecile (BILLY MADISON, THE WATERBOY), or his “pretend human” (BIG DADDY, 50 FIRST DATES). 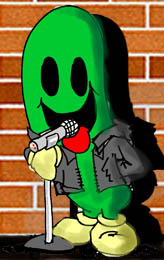 Sandler is George Simmons, a millionaire playboy comedian, who lost his edge years ago by making one too many teen-demographic movies where he portrays – ironically – jutting-jawed imbeciles. In these “movie” snippets, Sandler gets to play imbecile to his heart’s content, while in FUNNY PEOPLE itself there is a perfect mix of his personas, only enhanced by the raunchy writing and direction by the king of modern comedy, Judd Apatow.

I cut my finger three times on the edgy dialogue.

George Simmons discovers he has leukemia and a limited time to live. He takes a young standup comedian under his wing, Ira Wright (Seth Rogen), and tries to re-establish relations with an old flame, Laura (Leslie Mann).

The layers in these two relationships conjure a complex circus of emotions – for the actors AND the audience – because we find ourselves rooting for people who are not necessarily nice.

Ira is hired on a professional basis, to help George get in touch with his gritty comedy roots, and through his naivete becomes one of George’s only close friends, but his desperation for fame leads him to backstab his roommate (Jonah Hill). George needs to hire Ira because his loneliness and insularity has made him an unfunny cynic; he uses his sickness to win back the married Laura’s affections, not revealing to her when he is cured, so as to keep her sympathies. Laura’s dissatisfaction with a husband who constantly travels (Eric Bana) drives her to seek someone whom she feels will need her more, and be around more for her children (Mann’s and Apatow’s real life daughters, Maude and Iris Apatow).

These lonely, troubled, despairing, poignant, funny people are damaged goods. Insert phrase here: “Like all of us.”

Apatow knows this and exploits our frailties artfully. His advice on writing comedy: “Don’t worry about making the first draft funny. The movie is going to be funny regardless because we’ll cast it with the funniest people around. But for people to stick with it for an hour and a half, it’s a drama. A story people can relate to and are interested in following through.” 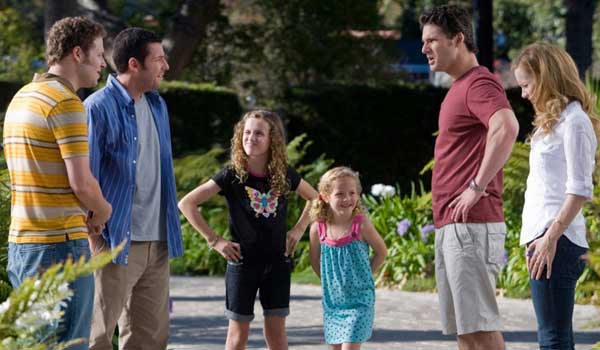 If Sandler, Rogen and Mann are the erratic heart of the movie, then Eric Bana must surely be the bared gorilla chest. He steals the movie as Clarke, Laura’s Australian husband, muscled like Hector of Troy, in touch with his masculinity as only an Ocker footy hooligan can be. But even when he discovers the almost-adulterous truth about Laura and George, he does not degenerate to the simple vengeful spouse (Ira comments on avoiding a beating at the hands of Clarke, “Have you seen his arms? They’re like legs!”), but rather approaches the ensuing farce with pathos and confusion, at first playing for testosterone laughs, then touching us with truly manly acceptance.

Now if your addled mind can keep up: in KNOCKED UP, Rogen says to his Jew friends in a night club, “If any of us is gonna score tonight, it’s because of Eric Bana in MUNICH.” That was in 2007, and that was the level of Rogen and his character back then – worshipping “real” actors like Bana. Two years later, he’s starring in a movie with his name above Eric Bana’s in the credits! Score, mate!

With a plot revolving around standup comedians, many others feature, foremost being Jonah Hill, who delivers his inimitable razorwire barbs, but playing alongside a snide Jason Schwartzman (as another roommate – and star of his own TV series), we feel the real world weight of those barbs; they don’t just exist in a SUPERBAD universe of juvenility.

Rogen performs his array of dick and fart jokes; Aubrey Plaza tells the usual reverse sexism gags; Indian Aziz Ansari displays an energy seldom seen in 7-11 clerk lookalikes. There are so many formidable one-liners that most of the trailers are outtakes.

Sandler himself performs some authentic meaty standup, sometimes reverting to his jutting-jawed imbecile onstage – “the more friends on myspace, the less in real life” – but works it beautifully in this context.

Thankfully, Rob Schneider, a staple unfunny element of Adam Sandler films, is absent here. Because Apatow knows funny. And Rob Schneider is not.

FUNNY PEOPLE does not go against ALL movie conventions (you’d end up with some kind of Andy Warhol insanitarium), but it goes against enough to make it a very enjoyable experience. Apatow has transformed his knack for shotgun dialogue and ad-lib malarkey into a more compelling vehicle with FUNNY PEOPLE, motivating his characters with fear, rather than simplicity or immaturity. Turning into some kind of insidious genius in the process.

He speaks to all the lonely, troubled, despairing, poignant, funny people out there. He’s talking right at all of us.