If she wants to play lumberjack, she’s gonna have to learn to handle her end of the log.
— Dirty Harry, THE ENFORCER.

Demi Moore tries to prove she’s got a dick. 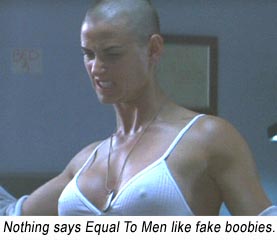 As Jordan O’Neill, Demi goes action figure in G.I. JANE and claws her rambunctious way through man-sized basic training to be a Navy SEAL in this extremely unimportant movie. Which I think the filmmakers regard as some kind of statement about womankind or transgenderkind or manwoman testicles or something.

Anyway, I missed the boat on that whole woman-empowerment, burn-the-bra, equal-opportunity, kick-male-butt feminism thing. Cos I have a penis.

So Jordan shaves her head, badgers high command not to give her preferential treatment (which is technically preferential treatment if they heed her request) and goes balls deep with the boys climbing obstacles and being shouted at by Master Chief Urgayle (Viggo Mortensen, with a faggoty little mustache and testosterone levels so dangerously high his balls are not just navy blue, they’re Navy SEAL blue).

To ensure we don’t mistake Jordan for a lesbian (a mortal sin in military parlance) or a feminazi (slightly less mortal), the story sets her up with a nominal army boyfriend in another sector. (Don’t Ask Don’t Tell but shove this gutless aside in our faces just in case…)

Totally ironic Jordan should want to prove she has nuts in an organization which is intrinsically one big penis inferiority complex. Why else do they loooove shooting off those big, big guns?

She lobbies for her “right” to share the sleeping quarters with the men, do pushups man-style and flaunt her implant juggernauts in the showers. And for the life of me, I don’t know what she is trying to prove. Let me get this straight: she DOESN’T want to get gang-raped, right? And you can bet if the men actually DO treat her like One Of The Boys, without askew glances, without flirty comments, totally flensing themselves of the desire to grab her jugaloos, she’ll be the first to whine that she’s not being treated like a woman!

Has it occurred to women that the double standards they complain about are brought about by themselves?

At one point, Master Chief Urgayle steps in on Jordan while she’s showering, to give her a message, looking over her nudity casually, like he’s too cool for frickin’ school, while she’s in prescribed Penthouse Posedown position (it’s a fact that all women shower in runway-model poses) – and what exactly are we meant to derive from this encounter: that he is taking her seriously because he is not trying to pick her up?; that he regards her as one of the boys because he has no erection?; that he’s insulting her by looking at her naked? I’m telling you – I missed the boat on this hypocrisy.

In PULP FICTION, John Travolta espouses how certain interactions between men and women, though regarded as casual, have much more sensual import than even pornography: “I’ve given a million ladies a million foot massages – and they all meant something. We act like they don’t, but they do. That’s what’s so fuckin’ cool about it. There’s a sensuous thing goin’ on where, y’know, you don’t talk about it, but – you know it, she knows it…”

So in this state of high libido, Jordan is handcuffed and bashed in a combat exercise by Master Chief (there’s a penis envy title if ever there was one, created by grown men with the mentality of frightened, entitled little boys). We supposedly turn a corner here. After the thorough bashing (with – you guessed it – simulated rape), instead of washing out of Navy SEAL School For Meatheads, Jordan defiantly taunts Master Chief, “Suck my dick!” And a cheer goes up from all the men. Yay! Jordan has a dick at last! Now we can all get some sleep.

Even when Jordan passes training, Viggo’s sadomasochistic Master Chief continues to be skeptical that she will make a good soldier, constantly riding her, “You’ll never be able to drag a man out of combat.” Upon consulting our Screenwriter Handbook, we see the flow chart denotes that she will ultimately drag Master Chief Bondage and Discipline himself out of combat. This she does, in the most contrived war scenes ever committed to film since Meg Ryan pretended to fly a chopper into a hot zone in COURAGE UNDER FIRE (1996).

So what does THAT prove? That she’s equal to a man? What does equality even mean when women cite it? How would the human race continue if women and men were the same psychologically and physically? We ARE different – live with it! If you don’t believe me, look two feet below your jawline – oh! A vagina and womb! Not better, not worse. Not equal, not unequal. Different.

Every time women claim they “want equality with men,” they mean “superiority over men.”

As illustrated by this ever-recurring scenario: So she’s granted equal pay, equal privileges, and god knows, she’s allowed to take her panties down in the same bathroom as the boys – THEN – she gets pregnant. And wants six months off work WITH THE SAME PAY AND PRIVILEGES! Which Hypocrite Queen said that was sane? Further, extolling pregnancy as some kind of “miracle” (again, for the sole purpose of making herself superior to men) – which it isn’t. It complies with all natural laws; nothing supernatural about it. And a billion species on Earth are giving birth even as she is yammering about how superior she is and how miraculous she’s become.

G.I. JANE’s plot of Jordan applying to be a United States Navy SEAL (Sea, Air and Land) is set in motion by a politician (Anne Bancroft) pulling strings. In real life, the number one qualification is: be male. Let’s face it, women would never be allowed into the SEALs. There’d be no troops left – all the gay guys would leave.

Tyne Daly in THE ENFORCER (1976), fought alpha male Harry Callahan every step of the way to accept her femininity-yet-independence. Every time Dirty Harry asked if she could handle the situations they got into, her catchphrase was, “Don’t concern yourself,” meaning, Don’t give me a break. But the fact you’re here means you’ve been given a break.

And that’s why this movie is so unimportant. Its very existence puts woman on a pedestal, thereby promoting her “superiority” from the get-go. It is giving women a break by featuring them as superior to men. It does nothing for and says nothing about female discrimination; in the patriarchal American Military there is innate discrimination even after the point where the men have supposedly accepted Jordan as an equal. And let’s face it: men only “allow” women the perception of equality – to get into their pants.

And we must question exactly what motivates Jordan to be this attention whore in the first place. Is it a misguided “duty to her country”? Like the rest of the grunts, she can do much more productive work for her country by NOT becoming an inculcated legal murderer (i.e. Navy SEAL).

Surprising that G.I. JANE is written by a woman, Danielle Alexandra (with David Twohy). Not surprisingly, directed by a man, Ridley Scott. Surprisingly, each sex didn’t do their sex justice.

G.I. JANE should really give you a hard-on. If you’re a woman.