That moment when they need volunteers for a horrible space death.

No Dreck on This Trek.

In its swinging skewering of that TV series which featured that Vulcan guy and that Overacting guy, GALAXY QUEST is everything that the SCARY MOVIE franchise is not: well-produced, well-written, well-acted – and funny. 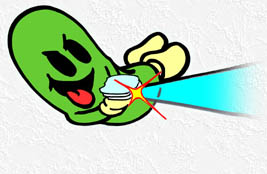 Jason Nesmith (Tim Allen) is the ex-captain of a television starship not unlike that one that boldly goes where no man has gone before, from a show which was cancelled 20 years ago, GALAXY QUEST. He and his crew, typecast for eternity as the crew of “The NSEA Protector,” fill their weary, laurel-resting days appearing at science fiction conventions, mall openings and autograph signings.

In what must be closer to the scathing truth than any real life series typecastee would care to admit, Nesmith’s crew moan en masse at their fate, which is double-edged: forced to dork themselves and recite lines from 20 years ago, but able to pay the rent for it. Living long. But not prospering. All except for Nesmith, who enlivens his role as action captain just a little too over-dramatically, not unlike that enterprising captain from that 60’s show.

There is ex-Shakespearean, Alexander Dane (Alan Rickman; though the loudest wheel in disparaging the GALAXY QUEST legacy, never thinks to remove the ludicrous latex headgear that buries him in the role of his alien character – the obvious Science Officer to Nesmith’s Cheesy Captain); Sigourney Weaver, a world away from Ripley, giving a Breasts-First performance as Gwen DeMarco (whose sole spacefaring job is repeating the captain’s orders to the computer and repeating the computers replies back to the captain), and the underrated Tony Shalhoub as Fred Kwan (parodying that Scottish engineer fella, but on ‘ludes); and we all know Sam Rockwell‘s character – the crewman who is sent down to the planet with the major stars – only to NOT make it back to the ship alive (you know – for that touch of “realism”), appropriately named Guy – as in “Guy #6.” 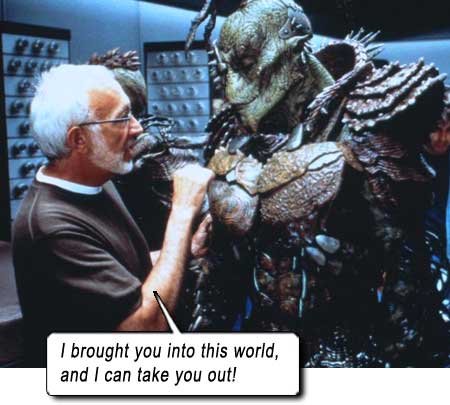 As Dane might have elocuted 20 years ago, “There are more things in heaven and Earth, Horatio, than are dreamt of in your philosophy.” Shocking them out of their stupor, the Galaxy Quest crew is abducted by an actual alien civilization, the benign Thermians – who over the years picked up transmissions of the series broadcasts, believing them to be “historical documents” rather than fiction – and seek their aid in defeating a real intergalactic villain named Sarris (Robin Sachs, in a fantastically diabolical performance, with makeup effects by legendary Stan Winston).

These “real” space sequences are where GALAXY QUEST pulls its biggest surprise. No quarter is spared in creating stunning space effects and authentic-looking alien monster villains. For the satire to run on steel-biting wheels, it was necessary to make this “real-life” intergalactic fracas as realistic as possible – otherwise director Dean Parisot would have had just another B-Movie on his hands with the cheapness and artificiality exhibited by the actual series he was spoofing!

The Protector crew must assimilate into their television personalities to weather the real intergalactic battle, as the Thermians, led by Mathesar and Teb (Enrico Colantoni and Jed Rees fleshing out their extraterrestrial roles with decidedly alien flair), have based their culture on the GALAXY QUEST canon – from its technical details (the NSEA Protector in operational full scale) to its slogans: “Never give up. Never surrender!” 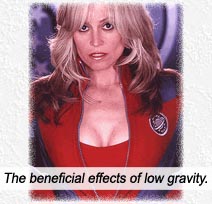 This movie is to the 60’s series as Spinal Tap was to heavy metal: it; it captured all the insider jokes that true fans would notice, and laughed WITH the fans, not at them. Dane disdainfully notes Jason’s Shirtless penchant; a hallway for no reason has chompy, crushy things just to serve as obstacles; engineer Kwan’s method for assessing the breathability of an alien planet’s atmosphere is to open the hatch and take a sniff; all the while, Guy wailing whenever unnecessary risks are taken, as he – being credited only as “Crewman Number 6” – will definitely be the first to die.

The hero-worshipping of the Protector crew by the Thermians lends itself to unexpected poignancy, when Dane, who holds his most famous phrase in contempt (“By Grabthar’s hammer, you will be avenged!”), unwittingly finds an opportunity to utter it, in grave sincerity, to someone for whom it carries worlds of weight – a dying Thermian who regarded Dane as his otherworldly father.

GALAXY QUEST affectionately gives the fanboys their due as rocket scientists trapped in dweeb bodies, as ubergeek Brandon (the stammering Justin Long), with fan-researched tech specs, aids in saving the Protector and bringing it Earthward.

But when Sarris appears at the film’s finale, it is up to Jason Nesmith to save the day with a cheese-alicious duck-and-roll and phaser powerblast worthy of… that guy in the yellow jersey (occasionally Shirtless and body-oiled) who made an art form of melodramatic pausing between lines – you know who I mean… by Grabthar’s hammer, the name’s on the tip of my tongue…