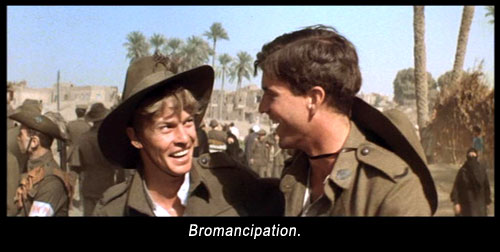 Peter Weir’s stirring anti-war epic, GALLIPOLI, has a heart as large as Western Australia, a sweep as wide as its blue-chiseled skies and – Mel Gibson’s naked 24-year-old bottom.

GALLIPOLI is not about Gallipoli. The botched Australian and New Zealand Armed Corp (ANZAC) landing at that Turkish beach in 1915 is merely the backdrop to Weir’s wondrous character study of friendship and loss, as a trained athlete with a planned future and a natural athlete who is a drifter are thrown into an all-consuming social calamity which happened to be World War I.

Rather than focus on the larger political canvas of the Battle for the Dardanelles (of which Gallipoli was a strategic plot point), Weir recounts the ANZAC effort from the naïve perspective of two barely legal Australian teenagers, Archy (Mark Lee) and Frank (Gibson, young and smooth as a baby’s – let alone his own – bottom), showing how the larger canvas obliterates the lives of the people providing the paint.The first half of the film, shot in the sweltering blue-skied expanses of Western Australia, is a paean to Life and Opportunity – languid, heady, joyous with innocence and aspirations. Though Australia was far removed from the European theater of war, propaganda was rife amongst the populace, inculcated to believe “you’ve just gotta be in it!” On a desert journey across a dried salt flat, blond Archy, always in white, espouses his blinkered views on patriotism, while dark-haired Frank, clad in black (like the rogue Solo to Archy’s angelic Luke), holds outlaw views that contravene the politics of the day: “It’s an English war, it’s got nothing to do with us.”

Archy’s uncle (Bill Kerr) has trained him to become a leopard of the track, a potential Olympian runner. To his uncle’s sorrow, Archy abandons his years of training to join the Army Light Horse. Yet there was so much military fervor sparking the air (gossip of friends joining and being honored, newspaper reports of “Germans crucifying kittens on church doors in Belgium”) that his uncle doesn’t question his “noble” decision to let his dream die and serve his country instead.

It is chilling hearing Archy mouth the same rationalizations that George W. Bush is rehashing in his epic War Of Terror (yes, I said “of” not “on”): “If we don’t stop them there, they could end up here.” (The movie is 1981 and the slogan is from a 1915 conflict, although the concept probably existed since cavemen had to cross the first lakes to stop other cavemen stealing their sexy, hairy-backed women.) 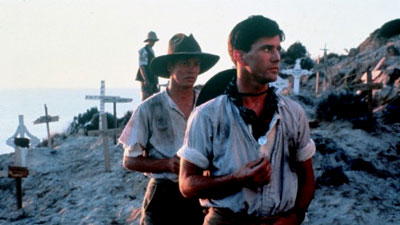 ”Are you looking at my bottom again?”

Eventually devil-may-care Frank is worn down by the jingoism he encounters at every turn – he can only take being called a “coward” for so long (and chicks dig the uniform) – and joins the infantry with three mates (Aussie soap regulars, Robert Grubb, Tim McKenzie and David Argue) on the strength of reading about the glorious Gallipoli “baptism by fire.” (I still remember this phrase from school history lessons. Gallipoli is to Australians what The Alamo is to Americans – a bungled defeat re-imagined as a metaphysical victory.)Onto Egypt for military training in the shadow of the Giza pyramids (there’s no beating location shooting!), an incongruous festive atmosphere pervading the Aussie troops regarding the distant war as a lark. Why else would so many be convinced to sign their death warrants by recruitment? Combat exercises on the dunes are taken so frivolously that not only is every soldier uproariously laughing during simulated attacks on fellow troops, Egyptian boys run alongside the trainees entreating them to buy trinkets. The camaraderie was the drawcard: taking the piss out of the Brits, tales of heroism, singing, drinking, fighting, whoring, traveling the world with your mates. Who wouldn’t sign up for this vacation?

Tracks from Jean Michel Jarre’s Oxygene are incorporated into the smooth-pad soundtrack, with synthesized sounds strangely reminiscent of bullets firing and ricocheting, adding to the surreal sense of detachment that all these characters are under. Even when our lads arrive at Turkey, the first few days are spent partying on the beach (with Mark Lee’s eternally-dopey smile and Mel’s eternally-smooth bottom) with shells exploding in the distant hills.

But of course, director Weir (who co-wrote the script with David Williamson) is merely building the mateship, the humanity, the naiveté only to dash it against the selfishness, the inhumanity, the stupidity of battle, thus debunking the mythic aura surrounding Australia’s supposedly glorious entry into the Allied War Effort.

Nearly one and a half hours into the movie, one of Frank’s three mates returns from a trench assault, bringing with him a frightening reality, reporting their mate “Barney is dead.” And in these last few moments of the film, the anxiety is ramped to insane levels as Frank is made a runner between trenches, with Archy prepped to go “over the top” if Frank does not deliver the crucial “hold” message on time.

While sympathetic officers like Major Barton (Bill Hunter) try to coordinate and make sense of the melee, higher-ranking officers callously use their Australian troops as cannon fodder, to sycophantically lay the groundwork for the British troop followup – and each young Australian “digger” in his trench line silently re-assesses the motivation which led him to this intractable fate.

Miscommunication was a major part of the ANZAC downfall at Gallipoli and it could be argued that miscommunication was responsible for accruing that many troops willing to get their butts shot off in the first place – purposeful miscommunication by the military, throwing slogans and agitprop at the public to entice the disenfranchised and then sacrifice them to the maw of attrition. These lies are still being perpetrated by the criminals in power.

Weir offers us such intimacy with these characters (Frank and Archy drunkenly pasting beard on Archy’s face to fake his recruitment age, joyously reuniting on the sand dunes, racing to the pyramids, crashing an officer’s ball together, etc.) that when Archy scrambles out of his trench, in the last sprint of his life, his death comes so suddenly and unnecessarily that we feel the blow as harshly as the Turkish rounds ripping into his chest in the final still frame.

”You might get shot up there, but everyone has already seen my bottom.”

Though there are multiple nameless deaths, as soldiers leave their trenches and are pounded back into them as if punched, Weir focuses pointedly on Archy’s death to drive home the loss. In the last scene, Archy is running alone, all around him having been mowed down; he has dropped his gun and is simply sprinting forward over No Man’s Land, labored breathing and pumping feet, his uncle’s pep-talk echoing in his head: “How fast can ya run?” “As fast as a leopard.” “How fast are ya gonna run?” “As fast as a leopard!” “Then let’s see ya do it!!” At the beginning of the film, we saw Archy complete his race against the clock, as he flew across the wire in that runner’s pose to end all races – chest forward, head and arms thrown back. And now, the final still frame shows him in exactly that same position, another race ended…

In Frank’s agonized scream, we feel the loss, multiplied over 11,000 ANZACs, each one of them, a story like Archy’s and Frank’s; each one with family, good mates, dreams for a better life, and the potential to be anything but collateral damage.Many wonder out loud at what Muslims tell their troops to make them suicide bombers or how the Japanese ever made their Kamikazes crash into the decks of ships, but the Western world’s troops are no better in their seeming fanatic dedication to suicide when told simply that “their country needs them.” Archy is offered the post of runner but gives it up to Frank, desiring the role of martyr instead, seeing before him the futility of trench warfare and knowing full well his fate. Archy’s last letter to his mother illustrates that right up to the point of death the diggers held fast their fantasy: “There’s a feeling that we’re all involved in an adventure somehow larger than life.”

There was no other option addressed in trench tactics – if raising your head above ground and having it shot off could even be called tactics. Archy and the men around him fatalistically accepted this as their destiny. These men died in their thousands like lemmings, watching the line before them fall, then going over the top anyway, again and again, as if any one suicidal surge might benefit the greater good.

GALLIPOLI, like ALL QUIET ON THE WESTERN FRONT or PATHS OF GLORY, puts paid to the opprobrious oxymoron “War Hero.” By definition, anyone who engages in an act of war (political maneuvering that causes physical battle) is nothing short of a congenital idiot; an evolutionary cul-de-sac. No, I’m not a “peacenik” – sometimes conflict is unavoidable, to destroy something that threatens your well-being – but to recruit through lies, kill without need or utility, destroy for greed, to further someone else’s political agenda through mindless human slaughter; all these things are idiocy, hypocrisy and stupidity. The Heroes of War are awarded medals for having killed the most people (i.e. the most brutal butchers) or having survived and returned from battle (basically, someone who took cover really, really well). Those are criteria for HEROES? Guess Hitler was a war hero after all. Just like Colin Powell and Osama bin Laden. (Consistency, folks! Don’t award Powell Distinguished Service Medals – under the euphemism “exceptionally meritorious service” – without considering the “exceptionally meritorious service” Adolph or Osama provided their countrymen.) 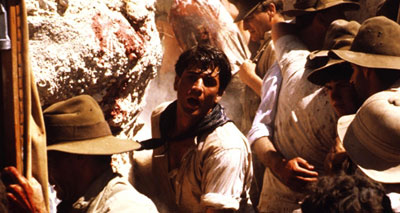 This movie is “heroic” for demonstrating how UNHEROIC war truly is.When the whistle blows and the troops surge over the sandbags in a futile crash into enemy fire, the few who hesitate are branded “cowards,” when in fact, they are the true heroes; not for the banal fact that they survived a war, but for the fact that they refused to die for a cause they knew nothing about and cared even less for.

Both Lee and Gibson were poised on the brink of stardom after this film and Lee somehow failed to make the leap. Like Han Solo, it was the “dark one” who went on to major filmic success. By 1987, Mark Lee was doing television serials, while Mel Gibson had completed three MAD MAX films and had just been turned into a LETHAL WEAPON.

I think it was that smooth bottom…