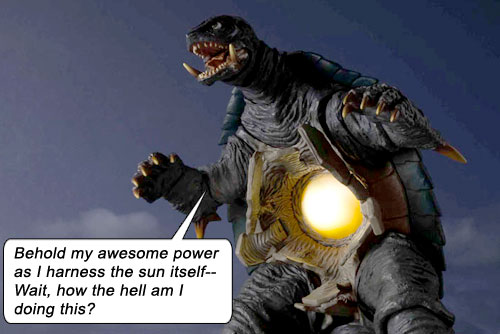 A synopsis for GAMERA 2: ATTACK OF THE LEGION reads: “A strange meteor lands in Japan unleashing hundreds of insect-like “legion” creatures which find their way into Tokyo. When the military fails to control the situation, Gamera shows up…” (Alex Smits, imdb). Wait, the “military fails to control the situation”? Let me ask: Have the military EVER controlled a situation in a Gamera movie? Isn’t this a given by now? Like gravity or breathing.

Notwithstanding the ultimate fate of the military before Gamera steps in (how does he sense that he is needed anyway, from whatever guarding-of-the-universe he might be doing in another sector? Supersonic sound waves? Radio messages? Prayers?), the military stomp quite a presence in this film and we follow their harried attempts at combating the alien menace with a sense of empathy, rather than just laughing at their toy tanks as per usual. (This also raises the question: Who or what did Gamera have to neglect in order to save stupid humans? There’s an ultimate answer to Gamera’s motivation right at the end of the film…) In fact, the military are instrumental in aiding Gamera defeat the alien threat.

Writer Kazunori Itô and director Shûsuke Kaneko (both worked on this movie’s well-executed precursor GAMERA: GUARDIAN OF THE UNIVERSE) have brought a fine grasp of Western filmmaking to the GAMERA series, with good production values, good writing, direction and acting, even from the bit parts, with some pretty darn good effects shots. Their opening scenes are laden with thriller elements and Gamera’s hero shots are majestic. With these two well-produced “modern” Gamera movies (GUARDIAN and LEGION), it seems Daiei Studios at last seized on the hot potential of the established property on its hands and had the sense to upgrade it for young adults and upwards, rather than cater to more infant brains (in the audience and in their own executive departments). GAMERA 2, like its predecessor, is a “real” movie, not something washed up from the vaults of a seemingly asinine Japanese movie industry.

The tropes remain though. Key players in all these monster mashes: Scientist, Military, Annoying Kid. As with many newer daikaiju movies, the Scientist is once again a sexy female (Miki Mizuno as Midori), accompanied by a comedy relief sidekick (Mitsuru Fukikoshi as Obitsu), the Military is somber Toshiyuki Nagashima as the Colonel, and the Annoying Kid is actually the teen girl from the last film who made a psychic connection with Gamera (Ayako Fujitani as Asagi), only annoying in the sense that I can’t get close enough to pinch pinch pinch those cute cheeks.

Gamera’s nemesis is an alien pod that flowers up through the steel of a skyscraper, birthing a gigantic electric-shockray monster (which the Military dub The Big One) and shedding thousands of insectoids that overwhelm Gamera, sticking to him like a velcro suit. It’s a well done effect, and Gamera then smashes through the town of Sapporo in pain, demolishing just as many buildings as he would have, had he just been destroying buildings for the helluvit.

When a soldier sees the insectoids cover Gamera – many beings acting as one force – he quotes, “And he asked him, ‘What is thy name?’ and he answered, ‘My name is Legion for we are many.’ Mark 5:8.” By Shinto! Why are you quoting the bible? 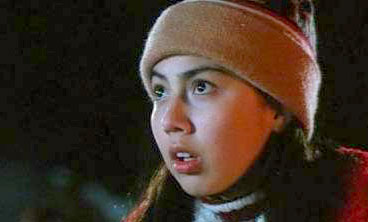 Once again, the military presence is handled with realism, Colonel Grave-Face warning Midori, “Some people think it’s dangerous to assume Gamera is an ally.” And this time, he sends out real tanks, to aid or destroy the giant turtle. (At last – the words daikaiju and budget in the same sentence!) Gone are the days when a kid in tight trousers could sway military policy with screams of “Gameraaaaaa! Gamera is friend to children! Start the attack now to help Gamera, oouwuaah!”

Gamera’s new suit design is righteously badass, spiky and tendoned and saurian in aspect. Due to entering into the realm of “real movie” we now have to judge LEGION by higher standards, so the suit passes muster, as do Gamera’s flying scenes – inspired, cartooning effects that follow dizzying action lines, with the rocket boosters in his legs emulating NASA gimbals. The most modern dynamic effects you will see in a Gamera movie to date. And when he flies with his arms out to his sides – that’s just gravy! So the last question is Gamera’s motivation: What’s in it for him? What does he want in return? A Japanese bride? A mountain hollowed out to call his home? A slab of Sapporo beer?

LEGION is to be commended for putting so much science into their story, with Midori comparing the Legion’s methods of seeding Earth to spores carried by birds to remote islands. In reports, we see the alien threat called a “symbiotic legion”; jabber about electromagnetic waves, fiber optics, a “Gamera site on the internet”! There is even a scientific autopsy of one of the alien creatures, following the synergy of movies like INDEPENDENCE DAY (Jul 1996).

After a middle act which sees Gamera frozen like a statue, he is defrosted by Pinchy Cheeks gripping her idol and praying to Shinto. Or Jesus. Who knows which fake deity handles mind melds between chicks and giant turtles? To defeat The Big One, Gamera harnesses the power of the sun and shoots it through his shell. (Hmm, starting to stink of “Godzilla utilizing heretofore unknown powers” and becoming magnetic.) I’d call it a shark jump if it weren’t so frickin’ epic!

And Midori and Obitsu ponder Gamera’s motivation in a final scene: “I don’t think it was us he came to help. But all life on the planet. Gamera is Earth’s guardian.” Obitsu asks: “If we continue to destroy its life?” She answers with a wry smirk, “We don’t want Gamera against us, do we?”

Well, not his badass 1990’s incarnation at least. Oouwaah!