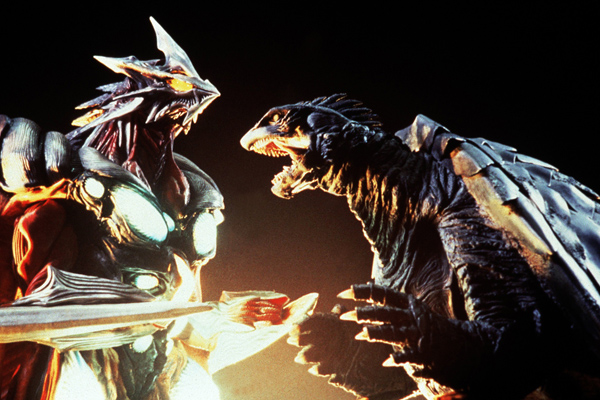 Iris meets Gam-gam for a spot of tea on the lawn– oops, the city’s on fire again!

Daikaiju Maniacs, if you seek a Japanese creature movie better than the recent 2014 GODZILLA Hollywood puffball, I recommend whole-cukedly the 1990’s GAMERA trilogy, GUARDIAN OF THE UNIVERSE (1995), ATTACK OF THE LEGION (1996) and THE REVENGE OF IRIS (1999), all written by Kazunori Itô and directed by Shûsuke Kaneko.

Created during a period of Godzilla downtime (between 1995 and 1999, while Godzilla was re-booting), this “Heisei” trilogy ranks with the best trilogies in any genre; in production values, stylistic cohesion, writing, direction and just plain balls-to-the-shell enjoyment.

THE REVENGE OF IRIS (the 11th Gamera movie and last of the 3 Heisei films) finds Gamera an enigmatic presence in Japanese society; having defeated overwhelming foes, yet distrusted and detested by many. When a young boy extols, “Gamera is our friend, or the world would be a Legion nest!” a young girl named Ayana (Ai Maeda), retorts, “You wouldn’t talk that way if he destroyed your home and killed your parents!”

Gamera’s inadvertent murder of her parents leads Ayana to seek revenge. She finds her method in the form of a hatchling from a mystical egg, a squid-like creature that she names Iris. Thus, what might have been the Annoying Kid (a daikaiju convention) is actually a somber presence, reliving the death of her parents every time she hears Gamera’s name. The Military (another daikaiju convention) are also portrayed more realistically, on the fence about Gamera as an ally, throughout the movie alternately trying to kill him and getting their asses saved by him.

The Scientist position is once again filled by the lovely Shinobu Nakayama, reprising her role as Mayumi, teaming with Asagi (Ayako Fujitani, reprising her pinchy-cheeks role from the Heisei era GAMERA movies, now looking mature and thusly hotteh!) to decipher the psychic bond that Ayana shares with Iris. In the meantime, Iris has grown from the size of a poodle to Gamera-sized, because – Japan. 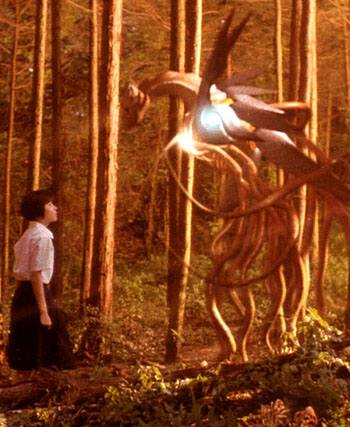 Great intrigue, great cinematic soundtrack (by Kow Otani), great process shots, great gods amighty! as the lusty pointy-bird Gaos battles Gamera in fiery abandon. Exciting angles, as we see low shots of Gaos’s eye-lasers cutting into Gamera’s arms; a closeup of Gamera’s volcanic mouth, fires baking within, unleashing the fury… in the ensuing explosions during battle, we see silhouettes of people being blown up, thrown into the air with debris, dying. I love it! (– the bravery to show people dying in a supposed kid’s movie.) Whether Gamera is “protecting” humans from Gaos, he’s still immolating half the city to do so – well, you gotta break a few eggs to make a pointy-bird omelet…

Two weirdoes appear, spouting prophesy and scientific thesis in the same breath, attributing motivations to the big animals; a crazed lady named Asakura and her fey Oscar Wilde-ish sidekick Kurata (Toru Tezuka, who reminds us of Vinnie Vincent, KISS ex-guitarist/knucklehead). Kurata espouses that Gaos is “this decadent civilization’s natural reset button, designed to thin the herd. Mankind has started his own extinction – and the Gaos will lower the curtain before his time.” Gamera is apparently the yang to that yin. There is also an intriguing idea of Gamera being one of many “biological experiments” – after finding a literal “Gamera graveyard” on the ocean floor at the opening of the movie; explained as beta-test models that were discarded.

The pointy-birds are forgotten in the final act when Iris grows into a massive armored pointy-beast with bladed tentacles, and is pitted against our favorite ninja turtle. Iris assumes Ayana unto him – “changing its chromosome structure” and “fusing its cells to hers” – disturbing. In a movie where every key player is female, is it any wonder Iris sucks Ayana into its decidedly vaginal opening?

The dogfight sequence between two fighter jets and Iris is actually exciting! Mission Control reports, “Unidentified object approaching the combat theater!” Of COURSE it’s Gamera, but wow, is it thrilling?! And when he appears in a cloudburst of BADABOOM! – popcorn falling everywhere! The effects are better than modern Sci-Fi Channel effects; a combination of cartoon, computer graphics and just great old-fashioned creative directing.

We almost forget it’s two guys in rubber suits, as the Gamera-Iris battles are staged with low cowboy angles, amidst clouded debris and fire and thunderclaps. It’s not just a profile view of two rubbers facing off across a toy wasteland – director Kaneko utilizes every cinematic trick in the book to frame this battle like Normandy meets THE WILD BUNCH. The city’s aflame, sky’s on fire, woman’s flames are reachin’ higher…

GAMERA: THE REVENGE OF IRIS ends on a note of redemption for all the humans involved, including the military who reconcile their fear of Gamera as an ally. And a crippled Gamera strides to the center of Tokyo in flames, screeching in defiance – as we see hundreds of Gaos birds flocking in his direction. Unfortunately, this cliffhanger would never be resolved, as the next Gamera movie in 2006 (GAMERA THE BRAVE) would reboot a whole new timeline.