As with all movies that kill off their prime properties in the first installment, this sequel to GAMERA (1965) must retro-activate a trashy pulp retrieve of its dead star attraction. So (in the American version at least) there is the sweaty-mouthed, talk-fast-so-no-one-will-notice introduction narration: Gamera, the destructive prehistoric turtle hatched from slumber by an atomic bomb, was cocooned in a rocket after his rampage through Japan, and blasted to Mars. However, out there in the vastness of space where anything can happen, mind you, a meteor impacted the rocket – releasing Gamera, who promptly flew back to Earth and broke more stuff. Bad turtle! 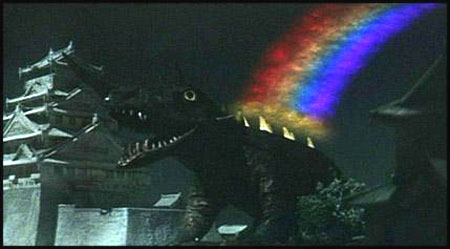 Okay, that takes care of the first five minutes’ padding. What now? As it happens, writer Nisan Takahashi manages to write a reasonably watchable actioner, with a plot about human greed and treachery, and a big monster birthed by radiation that destroys Japan. Trouble is – Gamera isn’t involved! The giant irradiated monster is a dog-alligator-thing with a freeze-ray tongue called Barugon. Kids, if you came to see Gamera Friend To Children, you snuck into the wrong drive-in movie. The Shelled One doesn’t appear again until a few minutes before the end, to kick some Barugon and take some names.

Production values are adequate, and when there are no monsters onscreen, this movie is a bearable thriller (directed well by Shigeo Tanaka, near the end of an illustrious career) about four Japanese adventurers (led by Kôjirô Hongô) seeking a treasure on a primitive island. As always, the natives warn of a primal terror that would destroy anyone foolhardy enough to steal away their prize. Bah humbug! The adventurers delve into the forbidden caves and steal away a giant opal. Even during its discovery one of them dies and one of them (Kôji Fujiyama) tries to kill the other two to keep the opal for himself. These scenes are the most interesting in the movie, as they deal with humanity at its worst, and therefore, most intriguing. Throughout the film, Koji will continually follow humanity’s darkest paths: when it is revealed Barugon can be led by a giant diamond into the sea to drown (a stupid plot point to be sure), Koji tries to steal the diamond. Give the guy points for not giving up on being evil! There is also a perverse romantic relationship between Kojiro and the islander woman (Kyôko Enami), who at one point – sucks his blood! (Don’t even ask…)

Turns out the opal was really an egg. It hatches Barugon, who grows to Japan-destroying adulthood overnight (again, don’t ask).

Thus, it begins: As Godzilla got stuck battling other monsters without the hindrance of plot, now the Gamera creators trap themselves on that same treadmill, in this first sequel, already bowing to that convention.

Barugon himself is not a bad monster; he’s only dubbed that way. When shot at the right angles, he is well designed and spectacular. And of course, no toy tanks or toy planes can defeat him. (What is it with these giant monsters and their imperviousness to military toys?) But the film kneecaps itself, so to speak, when it shows wide shots of Barugon – and we can see he’s just a guy in a rubber suit kneeling as if walking on all fours, like when you play horsie for your kid. The shots of the top of Barugon, or his front portion, are fine, but as soon as we see his knees, it breaks the illusion completely. (It’s like Godzilla’s ankylosaur pal Anguirus: he originally looked pretty good as a semi-believable rubber suit, but as soon as we caught a glimpse of him kneeling and pretending to walk on all fours it was all over.)

It’s either a shark-jump or the cutest, fluffy-poniest way to get killed ever! From Barugon’s back, a rainbow arcs across the sky [twinkly sound] and touches down, killing everything in its path. What genius at Daiei Studios thought up this gem? Now I’m rooting for the monster!

And the best part about GAMERA VS. BARUGON – no Annoying Kids! A staple feature of all daikaiju movies, no pokey-nosed, tight-panted brats are here superfluously, to tell the army what to do, or to yell and wave, “Gameraaaaaaa! Gameraaaa-san daikaiju ooouwah!” and wipe their snot on my car seats.

The humans find a way to combat Barugon by using mirrors against his rainbow. And then Gamera turns up out of nowhere and drags Barugon out to sea. It’s quite a tragic end, as we see one last rainbow shoot up from beneath the waters… [twinkly sound and silent tear].