Godzilla had Rodan, a giant marauding bird, so Gamera went one better and hatched Gaos – not just a giant bird, a giant pointy bird – from a volcano! With a head ornament styled after a shuriken star, and laser beams that slice things clean through, bird-bat-pointy-thing Gaos anoints GAMERA VS. GAOS as the most bloodthirsty of the Gamera movies. 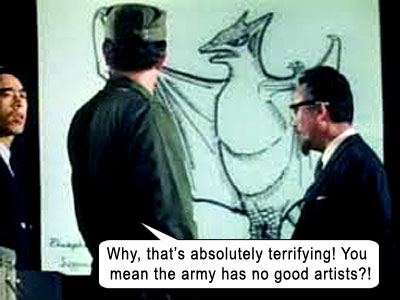 In this third Gamera film it’s about time Daiei Studios reconfigured their tentpole property as “friend to children,” to pull in the grade school demographic. So Gamera saves little Eiichi the Annoying Kid (dubbed “Itchy” by the MST crew) from the clutches of Gaos, and lets Eiichi ride wheee on his carapace; then they get ice cream and wear party hats.

The stage is set for Gamera to be Mankind’s savior. His deathmatch opponent: Gaos. In their first battle, Gaos carves Gamera like a stuck pig, bleeding him with lasers. While Gamera recuperates underwater, Gaos goes on a rampage. For what – we’ll never know. The Japanese companies that churned out these daikaiju films seemed to reflect Japan’s pathological self-mutilating syndrome, like a compulsive cutter. The genre’s ongoing success meant people were watching these stinkers and gleaning something from them. There is no inherent “message,” nothing deep or reflective – just lasers, fire-breathing, pointy birds and anointy battle.

Gamera realizes he needs to keep Gaos out in the sunrise to kill him. How does he figure that? Instinct, I guess. Or maybe it was the way the Gorbachev birthmark on Gaos’ head started throbbing. Anyway, he fails, and the military, taking orders from General Annoying Kid (due to his “riding on Gamera’s back” which gives him some kind of Access All Areas primacy), set up the roof of a building as a turntable with a blood fountain for Gaos to sup from to keep Gaos distracted while the sun is rising. Count Vlad the Impaler would be proud.

This too fails. In the final battle, its funny how Gaos “flies” without flapping his wings, as he picks up Gamera and keeps dropping him on his shell. We take it for granted that Gaos flies like Superman – through an act of will. But come on! It’s because it’s too hard to animate wing movements or to create a small model with moving wings. Especially with that Fucking Annoying Kid shouting “oochii otuki samu-san Gamaraaaaaaaa!” from the sidelines.

The team of Noriaki Yuasa (director) and Nisan Takahashi (writer) return for this bloody turtle battle, with Kôjirô Hongô (GAMERA VS BARUGON) returning as a leading man with no leading ladies and nothing to do.

Gamera eventually drags and drops Gaos into the volcano from whence he came. A simple fix, provided that Gaos lie still and take it like a bitch. Once again proving that… uh, Gamera is friend to children.