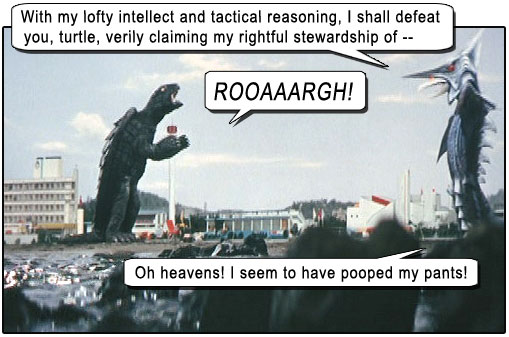 Space Fish Out Of Water.

GAMERA VS. ZIGRA is the 7th Gamera film, and effectively the last in the “Showa” series made by production company Daiei – and the exhaustion shows. (There would be one more contracted Gamera film in 1980, GAMERA: SUPER MONSTER, a stock footage compilation like a Greatest Hits album; then after a 15-year hiatus, the “Heisei” series would kickstart the giant turtle again in 1995.)

A goofy spaceship-entity named Zigra (which turns into a goofy fish-thing in the latter part of the film) threatens Mankind by landing in an Earth ocean and announcing, “Listen, all humans: you will be my slaves.” To the point, at least. With no point. You see, it’s pointless to threaten land organisms with domination – if you cannot exist on the land! What point would it serve whales to announce they are enslaving elephants if they have absolutely zero use for the land upon which elephants roam? Zigra is an aquatic organism and chose Earth due to Earth’s prevalent water coverage. It can hardly exist out of water, is intolerant to bright light, and can somehow cause earthquakes – a talent that involves manipulation of tectonic plates. Everything starts to make less sense than a flying combustion-legged turtle.

It is up to Gamera – “friend to children” – to fly in from God-knows-where and get defeated, cut to shreds by the dorsal fins of Zigra-deathfish. Then to make a comeback with his fire-breath and combustion legs.

Zigra also has mind control, and has enslaved a Japanese bimbo in tight glittery spandex to do his bidding. Well, he’s got reasonable taste in pearbottoms, so he can’t be all that bad. Bimbo abducts two scientists and their two Annoying Kids, ordering them to “tell the world of Zigra’s achievements in science.” Okaaay. Then what? You’ll enslave us some more?

Veteran Gamera scripter Nisan Takahashi once again tries to sound astronomy-literate, and ends up Lost In Space: “But if you’re 400 light years away, even if you traveled at the speed of light, it would take you 400 years to get here!” (Uh, doyyyy!) “You forget that space is curved.” Nisan, I’m sure you haven’t the slightest idea what that implies for space travel, but I’m sure you heard Michio Kaku say it once.

An environmental message is delivered as bluntly as a fish-slap in the face, that humans should not pollute the water. Zigra is a water baby and thrives in Earth’s oceans. Okay, let me get this straight: if we don’t pollute the water, then extraterrestrial aliens will find it attractive enough to conquer Earth for our sexy oceans. So… shouldn’t we POLLUTE then? To stave off alien attacks?

Speaking of pollution, have you seen how much oil Gamera burns with that dark smoke from his combustion engine legs?

As with any daikaiju movie, the Annoying Kids are the bosses, coquettishly ordering around the grownups, the scientists and the Japanese army. Everything revolves around them – even Gamera’s priorities, as he somehow pinpoints them in this vast universe he is presumably patrolling and conquering evil in, only to waste his time saving them, while wars rage in the Middle East and thousands of cats are stuck up trees. Even the mighty Zigra – with the power over plate tectonics, faster-than-light space travel, mass-hypnosis, laser destruction – cannot catch these two toddlers that can run at a median speed of 1.2 miles per hour.

There is one point when the two scientists submerge in a bathysphere to try to… who am I kidding? In this ridiculous, unmotivated plot point, suffice to say, they find themselves underwater with the two kids as stowaways, and there are a few touching and dicey moments when they are caught without a means to escape Zigra, who attacks them. Their families on the surface watch in helpless horror as the goofy fish-creature threatens them, and we feel a twinge of sympathy for the filmmakers in trying so hard to make this scene compelling.

With a roar like a chicken, Gamera conquers Zigra and plays xylophone on his dorsal spikes. Even though the scene is set at the bottom of the sea, movie could sink no lower. GAMERA VS. ZIGRA fulfills daikaiju protocol by having both monster combatants face off against each other across an expanse of land with tiny models near them to represent scale; Zigra stands on his tail fins for this encounter, looking more like a guy in a rubber suit than any of those goofball Godzillas.

Zigra is separated from all other monsters in Godzilla and Gamera canon in that he talks. Fat lot of good that does him. Once again, I ask: With all that cheese about his “achievements in science,” FTL capabilities, laser blasts, ability to hypnotize and to cause earthquakes, a speechless prehistoric turtle takes him out with a few karate chops.

Fine advice from these filmmakers not to pollute the water, when their film is still polluting the airwaves and broadcasting mankind’s stupidity into space at the speed of light.