The discovery… of tiny ships invading my arctic home!

GOJIRA was a smash hit for Japan’s Toho Studios in 1954, so competing Daiei Studios pondered on how they could also create a property as towering and nightmarish as the fire-breathing irradiated lizard; a gigantic, destructive, plodding behemoth that would strike terror into the heart of Mankind as fearfully as Godzilla, King of the Monsters! And they came up with… a turtle?

A Russian spy plane drops an atomic bomb (by -ahem- accident, of course) over the arctic. (In the original version, the American military shoot it down. Let no shame stop Westerners from re-editing to their heart’s content!) And a giant flying turtle is unleashed from his epochal slumber. First sighted over an ice ridge – an homage to that other property (wink wink) – the turtle is discerned as a prehistoric creature, and immediately named Gamera because Eskimo legend said so; and it starts demolishing Japan looking for nuclear power sources to eat, because Toho said so.

Looks a lot like that other irradiated monster that was awoken from his deep slumber and destroyed Japan – but this guy’s different. He’s a turtle. Guy in rubber suit, bipedal, two long fangs, flies like a spaceship, eats fire – all characteristics endemic to turtles, of course. One wonders why Gamera had to be a turtle at all. Onward…

Though it focuses on one family, a few scientists, and (in the Westernized version) bureaucrats locked in interminable meetings, movie mainly concerns itself with nothing more than trying to destroy the big monster that is trying to eat Japan’s nuclear energy plants. That’s where its similarities to GODZILLA end. By now, H-bomb radiation was no longer an anti-nuclear message or a parable about human abuse (as it was in GODZILLA); it had already degenerated to merely a plot point, and would become the engine that drove thousands of B-movies in the 50s and 60s. What created Gamera? Radiation. ‘Nuff said. Cue running and screaming and toy tanks. 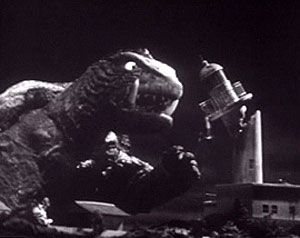 GAMERA, being a product of its age, was re-edited numerous times to cater to moron distributors who thought audiences were morons. In this version, we immediately know it’s not the original Japanese edit, as inane narration opens the movie, followed by British and American bad actors playing military guys. Why can’t they get the English dubbing correct on the English-speaking actors? And the Japanese official in the United Nations meeting pronounces his r’s as l’s, with an English dubber. Nothing at all racist about that! Unbe-fucking-rievable!

In the Westernized edits of this film, Gammera is spelled with two m’s, we presume so that dunderhead Westerners will know how to pronounce it. And in some versions, the little boy’s name is Kenny (as seen on the MST3K edit), while his name is Toshio in others.

Director Noriaki Yuasa and writer Nisan Takahashi try to humanize Gamera from the outset by having him save Toshio. Let me get this straight: Toshio is in clear view on the balcony of a lighthouse, which Gamera knocks over in roaring spite, then as Toshio falls, Gamera saves him. Uh, why not leave the lighthouse alone in the first place? Subsequently, Toshio becomes an annoying presence throughout the film, trying to get close to Gamera to “talk” to him whenever toy tanks and trains are being used to destroy him. Idiot. And that dubbed woman’s voice! God!

All these bad actors, including a white-haired scientist whom MST3K dub “Colonel Sanders,” somehow trick Gamera into stepping into a capsule that they launch to Mars.

Gamera would not achieve the heights scaled by the King of the Monsters, but his reign as Duke of Daikaiju begins here… 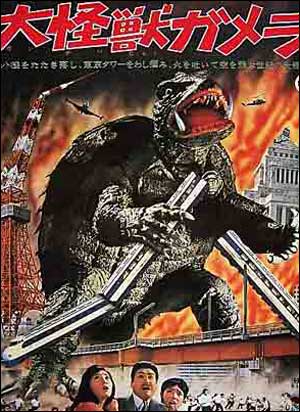