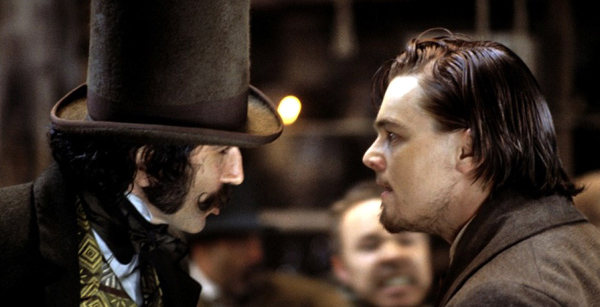 “You may be prettier than me, DiCaprio – but look at my MOOSTACHE!”

An Army Of One – Daniel Day-Lewis.

There are three reasons to watch Martin Scorsese’s superlative GANGS OF NEW YORK:

Marlon Brando as Don Vito Corleone, Al Pacino as Tony Montana, Gary Oldman as Sid Vicious, Val Kilmer as Doc Holliday and (to wax more modern) Hugh Jackman as Wolverine: iconic performances, one and all. Daniel Day-Lewis as Bill the Butcher joins this pantheon of Actors who made acting choices that so transformed them into these particular icons that one is hard-pressed to see the “star” beneath the role, even in retrospect.

Over the years, in his diversity of roles, Day-Lewis has insidiously placed himself amongst an elite few who have the right to actually term themselves Actors in this “excrementitious” business which has degenerated into a forum for “movie stars” (people with correct hair and au courant fashions). 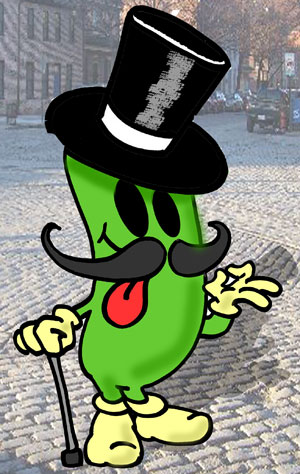 The plot of GANGS OF NEW YORK is almost an afterthought, as Day-Lewis’s scene-stealing is so complete we simply live for and unto each moment he graces us with his being. Set in the mid 1800’s, against the cyclorama of political machinations which defined New York City’s cultural eclecticism, an iron-fisted tyrant, Bill “the Butcher” Cutting (Day-Lewis) must deal with rival gangs and crooked politicians (are there any other type?) all threatening to usurp his power over a swathe of borough known as the Five Points.

Bill takes under his violent wing a young street thief, Amsterdam (Leonardo DiCaprio), not realizing that Amsterdam is the son of a former civil leader (Liam Neeson) whom Bill executed personally in a street battle, and who is biding his time for an opportunity to exact revenge for his father.

Day-Lewis personifies the age-old saw that any villain’s character is infinitely more interesting than any hero’s. This movie’s hero being Leo The Fluff did not help any. The only way Fluff could ever be Hard is if he became Tim Roth. I applaud his skills – he’s been doing it since he was 5 – and he’s honed his craft into that of a nascent Hollywood Legend (yet he has “miles to go before he sleeps” on the laurels of a lip-smacking role or major award), but his insipid chick-flickable role in TITANIC created that taste of sulfur in my mouth (and I’m guessing in the mouths of many others who might have marveled at his turns in BASKETBALL DIARIES and THIS BOY’S LIFE) to the point where he must almost martyr himself to engender any real likeability. (Next summer: THE PASSION OF THE FLUFF.)

In a film stocked with excellent actors (Brendan Gleeson, Neeson, Fluff, Jim Broadbent, John C. Reilly, Henry Thomas – and no, Cameron Diaz, is NOT one of those excellent actors, she’s no better or worse than any of a thousand women who could’ve filled the role of mob moll), Day-Lewis molds a larger-than-history persona that illustrates Acting isn’t as easy as we all think it is. We are shown – by an absolute Master of the Craft – how it’s really done: the force of will to forge this unique embodiment of power; abrasive, ambitious, ruthless, loyal; the choices of movement, accent, attire; each inflection, each flourish – Grand Gesture – not a smirk out of place, not a twirl of the mustache unintentional.

It was refreshing that the plot did not hinge on the ubiquitous device of Woman as the focal point. Even in movies that purport explosive grandeur, original storyline is so frequently sacrificed to the age-old struggle of acquiring a woman from a) another guy, b) another lifestyle, c) another tax bracket. Jenny (Diaz) intimates that she is Bill’s woman, so when Bill perches silently over the bed of Jenny and Amsterdam sleeping together, we jaded viewers grimace as we foresee yet another testosterone-induced stag-battle over the meaningless mannequin of Woman – but it did not occur! – instead, Bill is not in the least perturbed, but rather embraces an avuncular pleasure in knowing that his surrogate son has gotten some. Thereby Jenny loses all her importance to the tale. It lent yet another dimension to the enigma, the legend, the inexplicable conundrum that was Bill the Butcher – that IS Daniel Day-Lewis.

So when the revenge plot is enacted by Amsterdam and Bill retaliates, we know that the dreaded and violent conclusion is not in any way associated with Bill’s manhood being threatened by a puerile stray pussy.

Martin Scorsese directs with an iron hand, with his characteristic flair for ravenous camera angles and juxtaposing visuals with invasive music that is oft-times counter-intuitive. Nominated for 10 Oscars (unfortunately not winning a single one), GANGS OF NEW YORK, even without Daniel Day-Lewis, would still be a great film, scourged from the engine-pit of misbegotten pseudo-history and sand-blasted ocher-tinged onto the epic screen – but with Day-Lewis’s incendiary performance, GANGS rightfully earns the mantle of Modern Classic.

Brings the bile to my throat to think that while Day-Lewis has wrought such a world-shaking role as Bill the Butcher, there still exists on this stinking planet talentless drogues from MELROSE PLACE, movies such as POISON IVY II and FRIDAY THE 13TH: PART VII, and any of the twenty incarnations of POLICE ACADEMY dung heaps. In a world made better by Daniel Day-Lewis, should there be any reason to keep Steve Guttenberg alive?