Although Bill Murray (who voices Garfield) is truly a real-life simulacrum of the smug, under-enthused comic-strip cat, his intrinsically entertaining “character” was – dare I say it? – Lost In Translation (shout, but don’t hit) somewhere between the vapidity of the script and the orange computer blips representing the eponymous feline in GARFIELD.

Garfield’s master, Jon (Blandness, thy name is Breckin Meyer), is a card-carrying cat owner who is bequeathed a dog, Odie, by his veterinarian (a stunningly one-dimensional Jennifer Love-Hewitt, whose boob job long ago outpaced her talent and credibility), which he accepts unconditionally because he is googly-eyed over her. 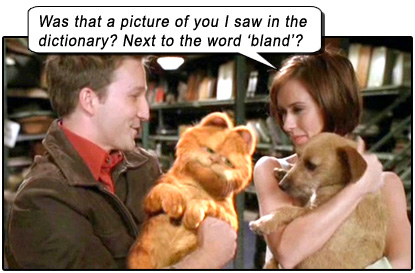 Garfield’s eminence is threatened when Odie snuggles indoors with Jon, while he is seemingly forgotten outdoors. Garfield tricks Odie outside, who promptly gets lost and then kidnapped by The Villain (Stephen Tobolowsky). Through cartoonish adversity and plot contrivances which could only be seriously entertained by fourteen year olds (including Garfield staging a Great Escape from an animal shelter and hijacking a train, no less), Odie is rescued and subsequently “befriended” by Garfield; the inane boy gets the tepid girl, the lukewarm Villain gets his comeuppance and everyone lives sappily ever after.

This is not a “bad” movie – it is simply devoid of a soul. The human protagonists who meander around Garfield’s universe inhabit a world where “middle ground” is as wide as Texas; even The Villain seems as sinister as apple pie – gone cold! (Large organ chords!) 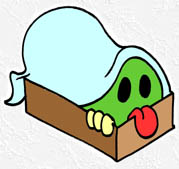 As if to presage the apathetic essence of the whole film, an early scene involves Jon coming home with four lasagnas, entreating Garfield not to eat them all, which Garfield promptly does. Instead of enforcing any kind of retribution/ punishment/ deprivation, or even a stern finger-wagging, milquetoast Jon makes some kind of insensately obvious statement along the lines of, “Did you eat all the lasagnas, Garfield? I told you not to” (exhorted with such impotence that one can’t even visualize inserting an exclamation mark after the sentence), and then they leave for the vet and the next syrupy, substance-less scene.In deeming this movie “for kids,” is it not enough that all emotive impact and any semblance of real human emotion is leached from the script until a bloodless husk remains; must any and all “messages” which concern retributive connotations also be excised to portray a world where nothing is ultimately “wrong” enough to warrant punishment or even concern? How noble to raise our children with the notion that Disobedience has NO REPERCUSSIONS.

The film suffered as a whole with the problem that Garfield was just not “cute.” What drew me to Jim Davis’s hilarious cartoon strip decades ago, was that every character is laughable by their appearance alone. The creators of this computer cat forgot the primo rule regarding cartoon heads: the bigger they are in relation to the character’s body, the cuter the character becomes. Garfield’s head was too small – or rather, his body was too overweight to be comically cute. And by making Nermal (The World’s Cutest Kitten) and Odie (a flummoxed, witless, balloon-animal-bodied puppy) “real-life” animals for the movie, Garfield effectively had no other “cute” entities to play off, and seemed at times misplaced in this world where everything was “real” except him.

Ironically, in this film, even Reality was nowhere near real…