Like Big Pharm, like Big Oil, like Big Corp, in the indie exposé GASLAND, it is revealed that the American companies that drill for natural gas are as unequivocally criminal and truly as insidiously evil. 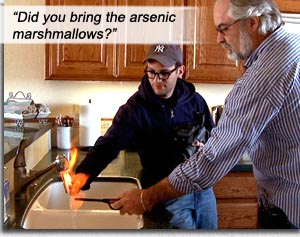 Filmmaker Josh Fox starts his documentary with a simple task: to trace the complaint of “funny-tasting water” in Dimock, Pennsylvania. It leads him across the United States and into the poisoned process of hydraulic fracturing – “fracking” – in an area called the Marcellus Shale, PA (“the Saudi Arabia of natural gas”), the process involving companies drilling a deep hole, then pumping in water, sand and chemicals to shatter or “fracture” the shale, which releases the gas.

The fracking contaminates residential drinking water for miles around, which results in the funny taste and contributes to chronic ailments in families who must subsist off that land.

“Return water” comes back up the well, shot through with poisons, which the gas companies get rid of using two methods: 1) trucks transport the water away, and 2) they pump the water into the air as spray, allowing it to evaporate. Once in the atmosphere, it falls as acid rain. Thanks, Enron.

I love the taste of trichloroethylene in the morning!

People find they can light their tap water on fire. Fox interviews many of the simple people of the land; they are not activists or insurrectionists, merely concerned that since their lands were opened to fracking, they cannot turn to anyone to resolve the issue of their funny-tasting fire water.Fox also targets officials, in uncomfortable interviews that get him nowhere and result in either stonewalling or walkouts.

A couple, Mike Markham and Marsha Mendenhall, sent away a sample of almost black water to the state department, and got back a report that it was “perfectly fine.” They show us the offending jar of sludge, then to drive home the point, Mike turns on his faucet and with a hooligan glee lights his water on fire.

Another couple, Jesse and Aimee Ellsworth were featured on the local evening news, a story of water contaminated with natural gas and being able to light it on fire. The story was pursued no further. Also featured on that report was a lady named Rene whose family of three boys was drinking the water for years and finding they were always unhealthy. Fox finds he has become an unwilling detective for all these people, who regard him as some kind of official; he speculates that a camera crew will give you that kind of halo. Nonetheless, he investigates Rene’s water in labs and finds
one of the “volatile organic compounds” that comes up with the production of the gas is trichlorobenzene.

Excerpt: from Environment-Agency.gov“Trichlorobenzene is a man-made chemical which exists in several forms. They are colourless liquids or solids with a characteristic odour and not very soluble in water. Trichlorobenzenes are very toxic to water-dwelling organisms and may build up in the tissues of living organisms. They are VOCs (Volatile Organic Compounds), which can contribute to the formation of harmful ground-level ozone. Trichlorobenzene has a variety of uses as an industrial solvent, insulating fluid, degreasing agent etc.”

That’s just ONE of the over 500 chemicals involved in fracking. And the drilling companies don’t have to report ANY of them…

How can regulation be so lax? Enter Dick Cheney. Yes, as unbelievable and incongruous as it sounds, from 1995-2000, then-CEO of Halliburton, Cheney, formed the Energy Task Force and with a $100m lobbying effort, in conjunction with the EPA, created the Halliburton Loophole for the Safe Drinking Water Act, authorizing oil and gas drillers exclusively to inject known hazardous materials unchecked directly into or adjacent to underground drinking water supplies. In 2005, the Act passed under – you guessed it – George W. Bush.

When we realize that the “Safe Water Act” is a euphemism and that it is slowly killing citizens in an ever-widening circumference, we realize it is no surprise at all that the two-headed felon Bush-Cheney is involved. They simply RELISH causing the deaths of thousands of innocents, no matter the country, no matter the cause, no matter the lie.

Resident Robert Blackcloud shows us a bubbling lake, oozing gas seepage; he too can light the water on fire, in small pockets of flames across the water, which would burn continuously were it left to do so. A real life Lake of Fire – how fitting that the devils Halliburton, Cheney and Bush created it.

A quote from Joseph Conrad’s Heart of Darkness pertains to something altogether different, but fits perfectly here: “…it occurred to me that my speech or my silence, indeed any action of mine, would be a mere futility. What did it matter what anyone knew or ignored? What did it matter who was manager? … The essentials of this affair lay deep under the surface, beyond my reach and beyond my power of meddling.”

“On the [EPA] panel that authored the report [on the contaminated land], five of seven members appeared to have conflicts of interest, and would benefit from the EPA’s decision not to conduct a further investigation… They showed it was toxic – then said it wasn’t a risk.”
–Weston Wilson, EPA whistleblower.

(Don’t know why people who tell the truth are tagged with the unflattering epithet “whistleblower” – as if they are covert or unethical; when in fact, the swine whom they are blowing the whistle on are the diabolical wrongdoers.)

“The Corporate Business Model: You come through an area as fast as you can, and if you trash anything, you make the people who you impact prove it – you make them argue it in a court of law, and the last person standing is bought off and you move on.”
–resident Lisa Bracken.

Josh Fox’s documentary, filled with ominous detail (though nowhere near enough to convict corporate swine for their fatal negligence), serves to open our eyes to yet another American cover-up that we’ve been conditioned to consider as safe and normal since birth.

To play – ahem – devil’s advocate: We live in a modern world, we need to industrialize processes like energy retrieval or we’d never reap the benefits of modernization. We realize there are dangers in every single modern process, from oil drilling to space exploration to simply driving a car down a freeway trying not to get killed by assholes. But like the innumerable regulations we adhere to for the general safety of ourselves and others in driving a car down a freeway, the minimum we could ask for from our gas and oil companies are analogous regulations that would ensure safety to humans while raping our environment for energy.

That’s all, corporate pigs. Or it becomes just another day trying not to get killed by assholes.

(Toxic) Still Waters Run Deep.
The 1999 movie, A CIVIL ACTION (starring John Travolta, based on the book by Jonathan Harr), is another real life case of people affected adversely by contaminated water in Woburn Massachusetts.

As with Dimock, corporations with unlimited wealth and limited conscience were to blame. The force of wealth that drove the corrupt defendant corporations was enough to deter lawyers from taking the case for the people. Even Travolta’s lawyer is ruined financially, and the people get a crummy settlement and no real justice. The underlying issue of that movie – the fact that something as fundamental as drinking water for human beings was being contaminated by other greedy, truly deviant human beings – was lost amongst the courtroom drama, and it was never considered an ongoing crime. But in 2010, we realize how deep the corruption spreads. It is inground in the makeup of our society that spreads its blame so thin over corporate bodies that no one ends up liable. As an exec says in SYRIANA, “Corruption is how we win.”

The 2000 movie ERIN BROCKOVICH (starring Julia Roberts) also deals with corps contaminating drinking water, based on a 1993 case against Pacific Gas and Electric Company. Added bonus of ugly Roberts in a push-up bra.

A late scene in CIVIL ACTION shows young punks throwing firecrackers across a river on the contaminated land; one of the firecrackers lands in the water and the whole river catches alight. A precursor to GASLAND…

Flowing into the main stream.
Oct 2010: Actor Mark Ruffalo appears on The Rachel Maddow Show on MSNBC to advocate against fracking. He brings the disturbing situation into the mainstream. Josh Fox himself would later appear on Keith Olbermann’s program.

In this ass-backwards societal system (that enables the criminals to set the rules that only they are allowed to break), nothing will be done to make fracking and any other energy retrieval methods safer, unless the Bush exemptions are addressed at their grassroots level.