THE GAUNTLET is a ludicrous, riotous, guilty pleasure, Eastwood at the helm as director and star, doing all those outlandish things only Clint Eastwood can get away with in a Clint Eastwood Movie. 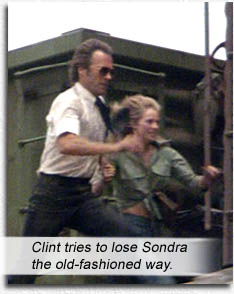 Clint is Ben Shockley (cool name, huh?), a hard-drinking, unreliable Phoenix cop, who must escort “a nothing witness for a nothing trial,” Gus Mally (Sondra Locke), from Las Vegas back to Arizona to testify against – who else? – The Mob.

Shockley discovers Mally is not as small potatoes as his slimy police commissioner (William Prince, channeling Dick Cheney) made her out to be, as The Mob are placing bets on Mally as a “no-show.” And sending assassins with lots and lots and lots of bullets to try to stop him.

Shockley thought he was chosen to escort Mally “because I get the job done.” Ironically, the crooked commissioner chose him because he knew drunken slob Shockley would be an easy target. No one to call, no one to help, no one to trust, Shockley is on his own; set up by his own department, with bullets coming at him every which way, Shockley at last finds incentive to really get the job done.

Sondra Locke looking her most delectable with those big doe eyes and 70’s-wench bellbottoms, doing the best acting of her nepo-Clint-istic career. She never achieved this level of natural-ness in any of her other roles with Eastwood; just a guess, but maybe she became too complacent as his main squeeze. After leaving Eastwood, she left Cinema.

Just another guess, but maybe her ousting was self-imposed after her directorial debut with RATBOY (1986), where Clint lent her his A-Team production crew (David Valdes, Joel Cox, Bruce Surtees, Lennie Niehaus, et al) only to have her pump out a landmark of filmic sewage.

In THE GAUNTLET, the ludicrousness starts when police open fire on a house that Shockley and Mally are hiding in, and shoot it up so badly it collapses. Film immediately redeems itself by having Mally change into something more prostitutable – tight velour bellbottoms laced up the ass-crack and a shirt-top tied up to expose her midriff.

Working with many familiar cast (Bill McKinney, Dan Vadis, Michael Cavanaugh, and Pat Hingle as a doughy superior officer – again), Clint stages one chase-and-shoot set-piece after another, each designed so that only an icon as audacious as Clint Eastwood could survive them.

The funniest slice of non-pc violence has to be Shockley punching the biker chick off the train. The act of punching ladies seems to advocate violence against women, but Clint’s avenger characters – of which Shockley is one, albeit more reluctantly than most – have always advocated only punching people who deserve to be punched. If they happen to be female, so be it.

The feature piece of THE GAUNTLET is also its grandest stupidity: Shockley and Mally driving an armored bus up the main street to the courthouse, while policemen line both sides of the street, unloading millions of rounds into the bus. Where do we start the one hundred questions?…

Have any of these guys heard of crossfire? Why didn’t Shockley drive faster than 10mph? Why didn’t the cops shoot out the tires? Even if the commissioner falsely warned against armed and dangerous perps onboard the bus, is it really police procedure to open fire on a city bus without it opening fire first? Is their aim to stop the bus or the people, because as soon as the bus stops and Shockley and Mally exit, the cops stop firing. And if their aim was to stop the bus only, why not a spike strip across the road?

Because nothing can stop Clint Eastwood. 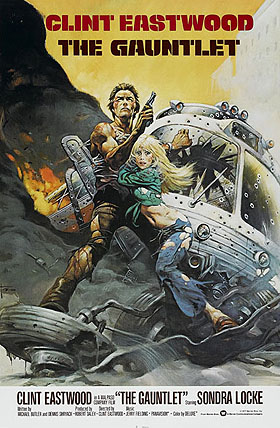 The Poster: a Frank Frazetta original!
Read about the poster here