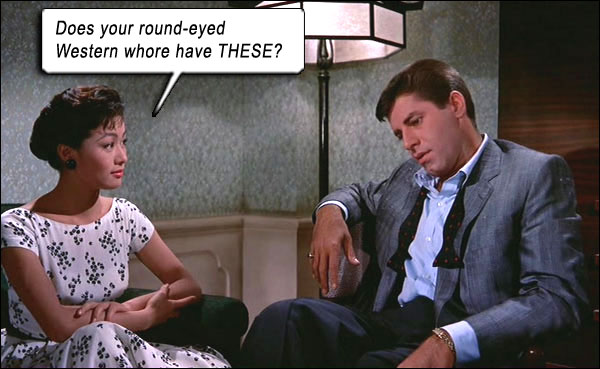 Not only does Jerry find his footing with a finely-tuned balance between drama and comedy – something he was striving for in his last three solo pictures – he also stops being racist! (Since his second film in 1950, Jerry has regularly done a “Japanese guy” impersonation with buck teeth, squinty eyes and gibberish Japanese. That character reached an apex of hilarity in LIVING IT UP  (yet we modernaires can sense its inherent racism). Matter of fact, Jerry breaks out Japanese Guy in his film prior to this one, ROCK-A-BYE BABY. With GEISHA BOY set in Japan, Jerry experiences firsthand what a noble, respectable, honorable people the Japanese are, and – in a movie where he might have ample opportunity – never breaks out Japanese Guy. And he never would again! His Japanese impersonation in THE BIG MOUTH (1967) would be a kabuki dancer, not the insensitive buck-toothed squinty-eyed guy.)

Now a mature and entertaining film character (he can lapse into his nine-year-old routine and then immediately punch it to drama in the next line convincingly), and discarding that which tainted his moral character, at age 32, Jerry has grown up. As reflected in his personal life: regarded as somewhat of a bigshot on the Paramount lot now (due to his solo films being hits, his career onstage and his roles of producer and star), this year Jerry, the family man with wife Patti and 4 kids, would purchase the 30+ room mansion of Louis B. Mayer in Bel Air (replete with numerous kitchens, bathrooms, pool, tennis courts, etc.), and in an interview to movie columnist Louella Parsons, he said those exact words: “I think I’ve grown up.” 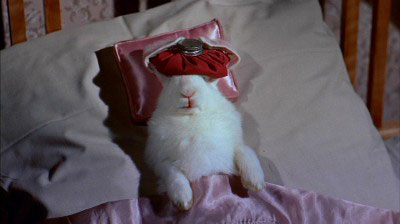 In GEISHA BOY, Jerry is low-rent magician Gilbert “The Great” Wooley (affectionately called Mr. Wooley by the whole cast), who scores a gig to entertain American troops in Japan. We meet him and his anthropomorphized hare, Harry, who is more magic than Mr. Wooley, appearing here, there, wherever he can cause the most trouble. Jerry screaming “Harry” would become the repetitive comedic tic. (When Harry is in bed with the water bottle over his head, I found it hilarious that they built a little dummy Harry with workable ears, which we see deployed in shots from behind the water bottle.)

While disembarking the plane in Japan, Mr. Wooley gets entangled with an American starlet (Marie McDonald, with a swell to her chest most magnificent for a 1950’s movie). A young orphan, Mitsuo (Robert Hirano), witnesses the fracas and starts laughing – for the first time since the death of his parents, we are told. Mitsuo’s guardian/aunt Kimi (Nobu McCarthy), is the official translator for the tour, and is so grateful for the minor miracle of making Mitsuo happy, she seeks out Mr. Wooley to thank him.

The filmmakers (director/co-writer Frank Tashlin and writer Rudy Makoul) treat the Japanese culture with respect, but they color outside the lines a little with Kimi’s boyfriend – a big dumb galoot baseball player (Ryuzo Demura, who looks like Jaws from the Bond series), only inserted into the first act for a slapstick chase with Mr. Wooley. After that chase, and one baseball scene, he just disappears from the script.

We see Mr. Wooley attempt to entertain a few troops, but by the Second Act, movie has dropped all pretense of that farcical plotline to focus on the touching paternal relationship growing between Mr. Wooley and Mitsuo, who considers Mr. Wooley his father.

High emotion, when Kimi translates Mitsuo’s gratitude: “He says he loves you, Mr. Wooley, and would you do him the honor to be his father?”
Mr. Wooley, somberly, tenderly: “I wish I were your father.”
Kimi translates, then tells Mr. Wooley, “I told him you loved him too, because that is what he wanted to hear. Please forgive me for lying.”
Mr. Wooley: “I don’t know that you were lying.”

Whereas Jerry’s recent films sacrificed comedy to go to serious or poignant places, which didn’t work, now he sacrifices comedy to go to those same places – and it does work. Credit must also go to director Tashlin who, in directing Jerry in three previous films (ROCK-A-BYE BABY, HOLLYWOOD OR BUST, ARTISTS AND MODELS), must have also found his formula to shepherd Jerry credibly through love and laughs. Jerry has noted he was “grateful to Tashlin” for allowing Jerry to “co-direct” this film and their previous one… which brings Jerry awfully close to Chaplin-esque…

There is also an innocent chemistry between Mr. Wooley and Kimi, which is both surprising and brave: Surprising because it demonstrates Jerry’s nuanced performance as a leading man; brave because white American tart Suzanne Pleshette waits in the wings as Mr. Wooley’s presumed love interest, a sergeant expressing jealousy when she sees him canoodling with Kimi. If American audiences of the day thought Suzanne and Jerry would pair off by film’s end, they were in for a shock, especially all those mongrel politicians who imprisoned the Japanese in internment camps during WWII, just over a decade ago! (Suzanne’s character laments she “once lost a boy to a Japanese girl” adding, “The next man I meet, I’m gonna forget that so-called American emancipated woman type of independence and treat him just the way the girls in Japan do.” What’s that supposed to mean?! Has racism been replaced by misogyny?) By film’s end, Jerry is with Kimi – with Mitsuo as their adopted son, we presume – creating a very modern American-Japanese nuclear family! For Norman Rockwell’s 1958, this must have been tantamount to treason! 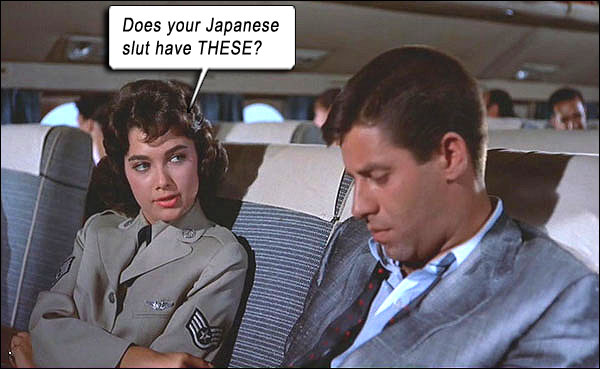 Kimi’s father is a funny inside joke to Movie Maniacs: it’s Sessue Hayakawa, the man who played Colonel Saito in BRIDGE ON THE RIVER KWAI just last year. Here he is a soldier, in full uniform, his hobby building a mockup tiny bridge that resembles that bridge on the River Kwai, complete with workers whistling the Colonel Bogey theme. He tells Mr. Wooley that people think he looks like “that actor” but “I was building bridges long before he was!”

At one point, Mitsuo is watching Bob Hope on TV entertaining troops, dubbed in Japanese. Already a well-known force on the USO circuit, it was gentlemanly of Jerry to acknowledge his work. And note: this is real footage of Hope with real Japanese dubbing – no Japanese Guy racism with gibberish Japanese!

One minute Jerry’s shouting at players in a baseball match in his high-pitched whine, the next, taking a sightseeing tour with the kid, playing surrogate father.

In scenes that tear our hearts out, Mitsuo appears at the airport, complete with a tiny suitcase labeled, “The Great Wooley Jr.” and begs to be taken on the plane back to America. Mr. Wooley must shout him away, like a faithful dog that won’t leave his side. 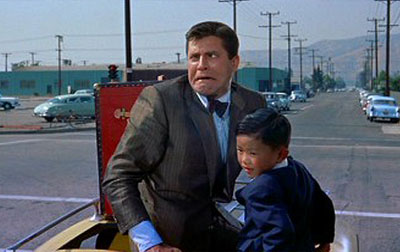 FYI: It ain’t ALL introspective nuance.

GEISHA BOY doesn’t follow every beat of THE KID, mainly the concept of the rudderless adult realizing he loves an adrift kid. We feel the Chaplin beat when the authorities try to separate Mr. Wooley from the kid and Mr. Wooley goes running off with the kid tucked under his arm.

For those who doubt the genius of Jerry Lewis, there is a scene onboard the plane where Mr. Wooley stows away back to Japan, and all that we see of Jerry Lewis is his arm, as it reaches through two seats to retrieve sandwiches surreptitiously. That’s all he has to work with to make us laugh – one arm – and it’s done brilliantly; every motion practiced, every emotion reflected in that arm as it scavenges for food.

Dean Martin used to complain about Jerry idolizing Chaplin, and was critical of Jerry trying to insert the nuances of Chaplin in their simplistic Martin-and-Lewis comedies. In GEISHA BOY, free from the strictures of Dean’s derision, Jerry gets as close to Chaplin as he’ll ever be. He’s written, produced, edited, acted, sung, conveyed pathos slamming up against comedy… he’s just an arm’s length away… now all he has to do is direct. And with an arm that talented…