Gene bastes his meat before eating it.

hen Gene Simmons called his 2004 solo album Asshole, who knew it would be such a wondrous eclectic mix of genres and variegated song stylings? And yet, we should have guessed this co-instigator of KISS had it in him, from the tenor of his last solo album, released in 1978 under the KISS aegis, Gene Simmons, which exhibited many more shades than his hard rock compatriots’ solo albums.

From swoony romancers to slamming sexers, from Bob Dylan to Frank Zappa, from metal to EDM and bossa nova, there are so many great songs and emotions on this album, it’s a shame it is not more widely recognized (reaching 86 on the US Billboard charts). There is something for everyone – the characteristic bat-demon growl on the hard rockers (which are a bit too grating for my taste, i.e. the genre for which Simmons is renowned are the throwaway tracks), to mid-tempo fun rock and roll, to Gene baring his soul on tributes to his recently-passed father and paeans to his wife, family and friends. Truly, the wild beauty of Asshole are those moments that Gene 20 years ago would have termed “experimental.”

If there are too many cooks and your art fails, you can point the finger and farm out blame; conversely, if your art succeeds, and you are at the helm… Full credit to Simmons for producing the album, coaxing out the various tonal shades and humor and poignancy and just plain enjoyable listening. Of the 13 songs, Simmons writes or co-writes all except 3.

Many hardcore KISS fans, or meat & potatoes hard rock fans might classify Simmons’ vanity project as a work of suck precisely for its varied scope, but Simmons makes clear he doesn’t give a fuck what people think and, in this case at least, triumphs with his unilateral judgment. (And hey, how many solo albums have THEY had in the Top 100? Yeh, I thought so…)

Even that album cover defies our expectations. We see a horde of women swarming one man and take it for granted that Simmons would have hand-picked the cream of the crop… but take a closer look – they’re all…. UGLY women! (Affirming those legendary tales of Gene picking up anything that barely walks, breathes, or identifies as his species.) Simmons has steered into so many left curves with this album, it could only end up right.

Firstly, let’s get these throwaways out of the way: Sweet & Dirty Love, Weapons of Mass Destruction, and Carnival Of Souls. These 3 heavy rockers serve a few purposes – to remind listeners of Gene’s heritage, to please the headbangers, and to grate on my eardrums. They have their good points (Bruce Kulick and Eric Singer play on the first two), yet their production seems hedonistically bombastic for no good reason. Especially when compared to all the other tracks, where such nuance is brought to bear…

Firestarter – a Who Wounda Thunk? moment, as Gene covers The Prodigy’s EDM masterpiece, featuring Dave Navarro on guitar. As in: Who Woulda Thunk the guy from KISS even heard of The Prodigy, let alone love their 1996 single enough to cover it and release it as his own single? A little weird hearing this American rock monster “singing” this song, though – it really needs that cockney British to make it pop, with Gene instead doing some kind of half-baked Australian accent. “I’m a Firestarter”–? More like “Oyma Foya-stahta”! And though Gene “rocks up” the song, he retains those little features that distinguish this rave staple – that wah-guitar and those little “toolooloolool” sound effects between the verse lines. The video features a bevy of ball-draining cum whores, trying to drain Gene, who is dressed like a pimp.

Waiting For The Morning Light. Another set of words you never thought you’d see together: Co-written by Bob Dylan and Gene Simmons. By Gene’s account: sometime in 1995, sitting in the same room at Gene’s house, both these legends crafted this country-tinged tune.

Beautiful. Funny how in the ‘80s, Gene used to tease Paul about his “pussy songs” – how Paul just had to include a pussy song per album. Now Gene’s got 4 or 5 on his own solo album. Then again, this song, written by Mark Addison and Nina Singh, celebrates a woman who isn’t exactly “natural” – calling her “silicone honey” and describing her towering height and 6-inch heels – in other words, saying that the surface is beauty, whereas every other song in this vein likes to think it delves deeper under the skin. 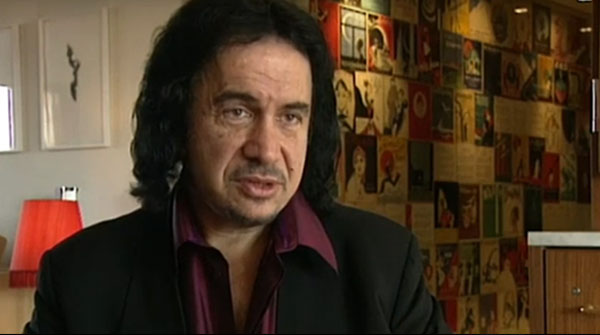 Asshole. The title track is one of the better songs on the album, however there are some uncharacteristically dumb lines, like “You’re such a creep / You look like a sheep” to describe the “asshole” he is singing to. Also: “You always look like an idiot”… those aren’t necessarily the traits of an asshole. Being a creep is acceptable; or “One day you’ll finally shut your trap” – but looking like a sheep? That’s more like a nerd, right?

Frank Albin Tostrup is a one-man band on this song, writing, playing drums, bass and guitar, with Gene only contributing lead vocals. Gene himself says he’s filled with envy that he didn’t write the title track. Tostrup is ambiguously European, which may account for the weird lyrics.

I know Gene would like us to think that “Maybe I’m an asshole too…” but we see you, Gene – anyone who writes Now That You’re Gone or 1,000 Dreams can’t be that much of an asshole. Right?

Now That You’re Gone. This slow lament features Gene’s daughter Sophie on choral backing vocals, and Bob Kulick (illustrious bro of Bruce) as co-writer. At first it sounds like the usual “love lost” trope, but then we hear the lines, “You left us when I was much too young / And I was your only son…” My heart skips: oh my god – it’s for Gene’s father…

Feri Witz, who had abandoned Gene and his mother Flora Klein in Israel when Gene was only 6, died in May 2002. From Gene’s account, he never had much love for the man, but with this 2004 song, it seems Gene is absolving his father of past sins. The poignancy is that Gene’s lyrics don’t go off on a success-as-revenge bender. He doesn’t say “Now that you’re gone, I’ll take my riches and enjoy my life” – no. He takes the humble road:
“Now that you’re gone / I’ll go on living
And I’ll carry on just the same / You’re not to blame…”

It would not be until March 2011, when Gene would feel the full impact of his father’s passing, when his  family in Israel take him to visit the final resting place of Feri Witz. In the most touching FAMILY JEWELS episode ever (S6, Ep5-6 “Blood Is Thicker Than Hummus,” aired June 2011), the great KISS instigator breaks down and weeps inconsolably at his father’s grave; a humbling and saddening experience. At least this heartfelt song would stand as a final gift.

Whatever Turns You On (Turns Me On) – fun-loving and repetitive honkytonk rock, featuring the person who has somehow turned on this self-admitted philanderer for the past 20 years – Shannon Tweed (and her mother Louise) on backing vocals.

Dog. Co-written by a guy named Bag (dude, how do people find you on the internet?!), the two high points of this satire are the high harmony above Gene’s baritone, and the take on Red Riding Hood, “And you say, ‘That’s a big tongue you’ve got!’, and I say, ‘The better to EAT you with, my dear’…”

Black Tongue is an original Zappa 7/8 experiment, licensed by Simmons and turned into a bluesy sleazy rocker.

Zappa would have been pals with Gene purely for the fact Gene achieved a monstrous level of fame that allowed him access to Zappa. I’m sure Zappa would never have had Gene join his band onstage or co-write a song with him. Still, there’s nothing stopping Gene from being a giant Zappa fan (like the rest of us) and paying tribute to him by covering one of his riffs.

When Frank was alive, he invited me over to his home and I sat around with his family, and he was very gracious. After he passed away, I asked his wife whether or not he had any unfinished songs, and [Frank’s son] Dweezil brought over a thirty-second tidbit of a piece originally called ‘Black Tongue.’
— Gene Simmons, Rolling Stone, 2004

We hear the original Zappa recording in lo-fi – until Simmons’ new instrumentation punches it into modern production and simplified 4/4 shuffle – and at points we hear snippets of the genius himself, offering nuggets of wisdom. Just as he used his own family on Whatever Turns You On, Simmons now has Frank’s widow and progeny provide backing vocals – Gail, Moon and Ahmet – with Dweezil scarring into the guitar solos.

Carnival of Souls. From a hastily-tossed-off album name (Carnival Of Souls, 1997) to a demo for the Reunion album Psycho Circus (1998), to a final realization as an annoying thrash-like track on this 2004 album. I just don’t like songs where the snare is hit on EVERY beat. Stop that noise!

If I Had A Gun. About an outcast who feels like a gun would solve his problems. Not something we’d expect from the mind of Simmons, and surely, this was a song mainly written by that guy whom no one can find on the internet, Bag – who happens to be the first artist signed to Simmons Records. Good luck with that career name choice, dude… It’s 20 years later, and I STILL can’t find you on a Google search.

1,000 Dreams, written for his love of over 20 years (at the time), Shannon Tweed (although Gene self-admittedly had not stopped screwing around yet, because – asshole!), this relaxed, romantic bossa nova features lush strings and intentionally untidy double-tracking of Gene’s voice, with intent to make him sound like an old-timey crooner. And surely, any teen would swoon if their boyfriend were to croon this to them, with this sentiment.

After the chorus, there is an extra 2/4 bar, which is made to sound like a relaxed pause before launching the next verse. It’s brilliantly done, inserting an old-school vibe into what we know must be a song underpinned with a click-track.

The majority of singing on the album is Simmons in a lower register; we rarely hear this voice on KISS releases, unless he’s trying to sound ominous. And he swoons effortlessly into his higher chest voice and then into head and falsetto. And his falsetto is not that power-falsetto of Rob Halford, or even that rock-falsetto of his mate, Paul Stanley, rather this beautiful pure falsetto (that he used once at the end of his first solo album in 1978, in Wish Upon A Star). Of course, Simmons necessarily uses the demon voice on the heavier tracks, but on this album it is absolutely not his mainstay.

The songs on Asshole were completed after The Reunion Tour, which means that these ideas were bubbling inside Gene Simmons for years, maybe decades. I really wish he (and Paul Stanley) had allowed themselves to cultivate this kind of eclecticism in KISS. Who knows how they could have grown as a band? Who knows if the original lineup might have been saved for the interesting diversity they brought to each album? Yeh, shoulda woulda coulda… Makes one wonder what more Simmons is capable of, and what is left unreleased in his vault. Will some young far out artist one day come along and ask the same thing of Shannon Tweed? 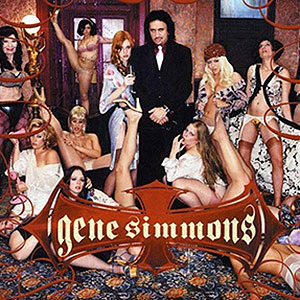 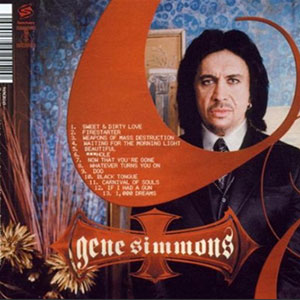