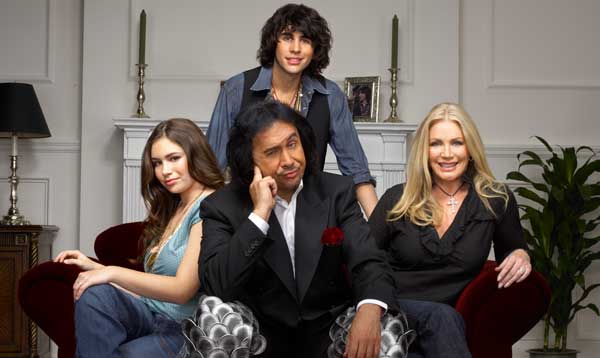 The World’s Coolest Family in the World’s Fifth-Dumbest Show.

How the mighty have fallen.

Yes, though the Poisons and Cinderellas and Wingers (with their nattily-ripped jeans and scarves and cultivated bedhead ‘dos and cowboy boots) made it unfashionable to look like you were so obviously “in a Band,” there was nonetheless an unspoken respect for being “in a Band.” There still is.

And whenever we were exposed to the public persona of Gene Simmons (the instigator of KISS, a long-toothed – and long-tongued – child of glam and arguably one of the grandfathers of the rock scene as it rolls today), he always looked like he was “in a Band”; he was always “on.” Like most performers or celebrities, we very rarely saw him living his normal life – if his life could ever be construed as normal in the first place. But with this FAMILY JEWELS debacle, we see a side of Gene that I don’t think the world should be either allowed to or privileged enough to see.

Shamelessly ripping off THE OSBOURNES format, FAMILY JEWELS demystifies the god status that Simmons has worked so hard to cultivate over his 35-year career. And who wants to see their god with his leather pants around his ankles?

The very first episode of the first season disrespectfully attacks a tenet of his that he has unrepentantly stood up for with cloven hooves since his celebrity star rose in the early ’70s – that of philandering bachelorhood. The writers of the episode seem to never have heard a word Simmons has said over the past 35 years, constructing the episode as if Simmons’ aversion to marriage is something that he just formulated yesterday, disrespecting his ethos to the point of staging a fake “surprise” marriage to his partner of 23 years, Shannon Tweed. It was beyond infuriating.

From there, it is all downhill. In future episodes, Gene would be put through the “normal guy” wringer, from being beaten up by a class of kung-fu women, to behaving like a square father in front of his son’s bandmates, to cleaning up horse-poop.

And that’s a big bowl of wrong.

The salvation (or maybe the downfall) of the show is its depiction of Gene Simmons’ family as more well-adjusted than most “normal” people’s – let alone celebrity’s – families. 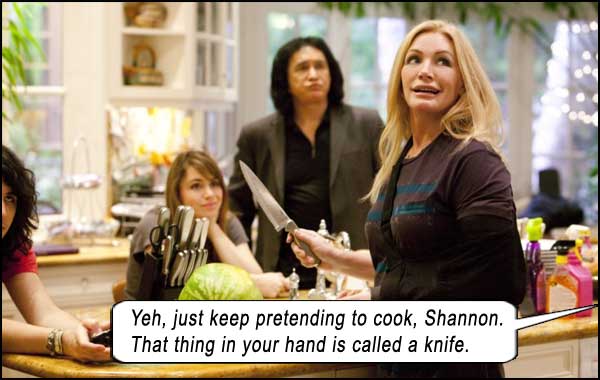 Matriarch Shannon, former Playmate, is no overbearing Sharon Osbourne, nor a statuesque façade; no unquestioning, non-thinking receptacle for Gene’s demon-sperm. She very clearly retains her own mind – a more beautiful thing in a woman than the most realistic of fake jugs – and her own career, and has only remained Simmons’ main squeeze for so long because (as he asserts correctly) “she is her own woman and doesn’t define herself through me.”

I still remember Nick Simmons as a tiny, long-haired were-Kisser. Born in 1989, now taller than Gene (at 6’4″), this guy is the most well-adjusted, intelligent teenager I have ever seen in my life, let alone on television. If this is the new wave of teens, the world might hold out hope for a better future.

So too with Sophie Simmons (b. 1992), a beautiful young, classy lady, so well-adjusted that the presence of an unfortunate birthmark on her face is only minimal cause for concern in one episode, not an ongoing source of teen angst.

Unfortunately, Nick and Sophie are exceptions to the Hollywood rule. The strange paradox of FAMILY JEWELS is that one would imagine the series only secured airtime because television executives believed they could really spin some dirt to the vicarious public if they followed “that KISS guy’s” family. But we are shown exactly the opposite.

Of course, this might all be façade for the show – but if so, why? Don’t people want to see dirt? And isn’t it totally within the idiom of the Simmons enclave to provide that dirt?

Still, it is a welcome respite from the spoiled-shit hellspawn of those enabled mongoloids who call themselves the Osbourne kids, and Ozzy himself with his stuttering, incognizant dishabille, which wore so thin so fast, one wonders what it says about the incognizance of lowbrow America that THE OSBOURNES lasted so many seasons.

A noteworthy aspect of FAMILY JEWELS (almost subsumed by the “Britney” antics that the show’s producers obviously focus on due to their aforementioned lowbrow audience) is that it does indeed show us some of the machinations of Gene’s Dark Empire. In the stead of the KISS phenom, which he has been phasing out of prominence, he has branched into myriad avenues (TV and movie production, cartoons, reality shows – ugh! – magazine publication, clothing, recording companies, bookwriting, lecture tours, etc.) and his re-wrought public persona is now at the perfect age with the perfect forum for espousing his dynamic views on business, family and society. If only there wasn’t so much horse poop, figuratively and literally… 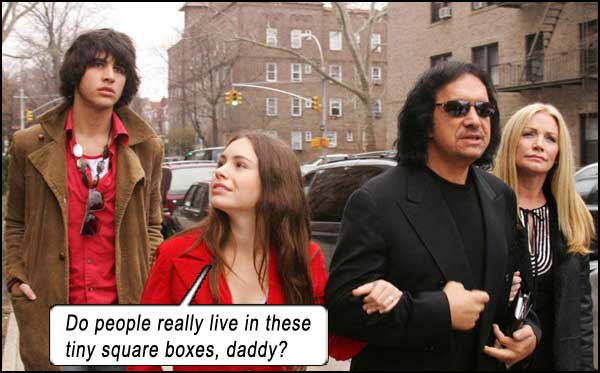 Don’t let the fact that Gene was a circus performer in KISS for three decades distract from his lucidity, intelligence and songwriting skills. His two books to date (Kiss and Make-Up, 2001, and Sex Money Kiss, 2003) and his solo album (Asshole, 2004) are informative and entertaining to a fault. Only a well-organized, intelligent and truly driven person can run a marketing empire single-handedly as he does – by this I mean that HE is the instigator and brains behind all Gene Simmons’ enterprises, not some advisors and yes-men. (In one scene on Simmons’ 2004 DVD, SPEAKING IN TOUNGES, Eric Singer, while visiting Gene and chatting about Egyptian esoterica, turns to the camera and says, “See, every time you’re with Gene, you learn something.” Sure, it’s a gag, but there’s a veracity behind that quip that Gene’s power-mongering and financially successful existence bears out.)

KISS as a relevant entity began their decline shortly after The Reunion Tour of 1996, when they eschewed new material for resting on spandex laurels. But GENE SIMMONS has moved on (maybe not out from under the shadow of his most vivid creation, but forward nonetheless) and is as relevant as any public personality on the idiot box or in the media today. Hell, the messages of self-realization and power that he stands for are more relevant than retard Britney nearly dropping her baby or slut-whore Jessica Simpson not being able to find a man (JAYzuz Christ!). Oh – and lest we forget – some guy from N’Sync came out of the closet. Like that’s a fucking revelation…

Into this paparazzi hash and shitstorm, GENE SIMMONS FAMILY JEWELS is dropped, and you know, for all its disparaging of a mighty avatar – and for all my disparaging of the disparagement – it might just be a Good Thing.

I like the hook of this poster: note that everyone, except Gene, has their tongue out – even the dog. And subliminal as a left hook, the KISS allusion – dragon boots. 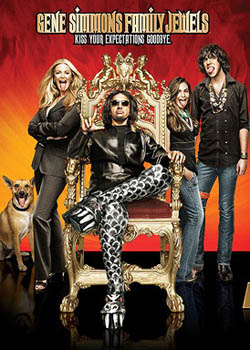