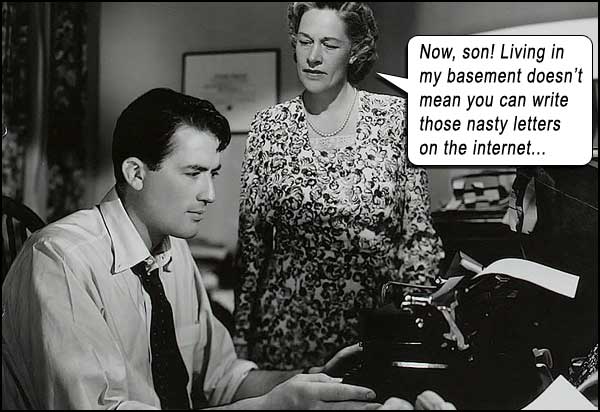 In researching an investigative piece on anti-Semitism for his New York newspaper, Phil Schuyler Green (Gregory Peck) hits on the idea to go deep undercover and pretend to be Jewish; to live in Jewish skin and report how society reacts to him. His scheme goes all too well, as he is dis-invited to certain parties, loses work, learns the bitter meaning of “restricted” hotels, has to defend his son at school, and even uncovers deep-rooted, unrealized anti-Semitism in his fiancé. Welcome to the Real World, Phil…

Apparently, GENTLEMAN’S AGREEMENT was the first major studio film to use the word “Jew.” I could jump to a thousand conclusions on the gutlessness and bigotry of the American Film Industry, but I’ll just let that fact air out, like an unspoken indictment, a gentlecucumber’s agreement. A taboo unspoken.

A Gentleman’s Agreement is a tacit understanding between people of a certain party, caste or club. In this Elia Kazan film (from the book by Laura Z. Hobson) the “gentleman’s agreement” is anti-Semitism. Not very gentlemanly, and not very agreeable…

Released just after the Holocaust, can any of us in 2009 apprehend how this anti-Semitism sermon would have felt like electrodes on the testes of society? Yet in 2009, the film still retains its electricity. Because, much like the electing of a black president did not stop racism, the prominence of Jews in powerful media forums does not stop anti-Semitism.

If you can navigate the naive boy-girl interaction of close-mouthed kisses and fully-clothed embraces; if you can grimace past the theatrical acting stylings of Dorothy McGuire, and make your way to the close-jawed passion of Peck, there is a powerful movie lying in wait.

In GENTLEMAN’S AGREEMENT, an executive speaks out against Phil’s article: don’t bring up anti-Semitism and cause waves. The editor replies, “Pretend it doesn’t exist and add to the conspiracy of silence?” And the executives at the movie studio – 20th Century Fox – argued over the same thing! The film itself almost turned into a Gentleman’s Agreement. Additionally, the Jews who owned the studio didn’t want to call attention to themselves as really running the industry!

They were right to be wary of repercussions. The small minds of the House un-American Committee came calling on the filmmakers… gutlessness and bigotry writ large. “Have you no sense of decency, sir?”

Peck called the movie, “Entertainment with an idea behind it.” (If you can say it without opening your jaw, you’ll sound just like him…) With his tiny tie and Brylcreemed ‘do, shoving the words Jew and Christian in people’s faces, his ersatz Jew unearths all the myriad masks of anti-Semitism: not just the overt shouted insults or bullies, but those who ignore it or let others off the hook for it; even the inculcation that “Christianity is superior to Judaism,” allowing some Jews to let others think them Christian without denying it. 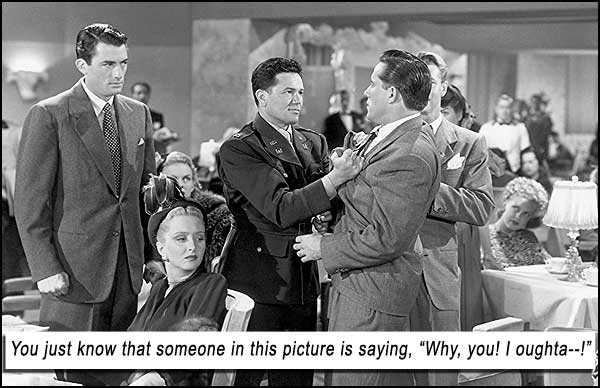 The film’s major failing is in the character of Phil’s girlfriend, Kathy, who somehow retains his affections through her closemindedness: when Tommy comes crying of bullies calling him “kike,” Kathy consoles him by telling him he’s not really Jewish. But Phil’s point is that you have to fight it even if you’re not Jewish. Christianity should not be a safety net for the gutless to fall back on. She doesn’t get it. She argues and rationalizes and wears those annoying pointy bras. It takes one of Phil’s military buddies (John Garfield) to crack open Kathy’s eyes with his big strong military shoulders.

Dramatically, we understand Kathy needs to be a “quiet protestor,” so that her character can arc from unknowing prejudice to visceral understanding, but even her recant seems grudging, and the soft-focus is out of control, and I think I cut my finger on her bra.

Meanwhile, the film provides Phil with a perfect soul mate, Anne (Celeste Holm); honest, telling Phil to his face of Kathy’s wimpiness; intelligent, with a hatred of hypocrites that she proves by her actions; open-minded, looking like she’d take three guys in the backdoor if you plied her with enough Vodka, unprejudiced – AND blond; Anne even makes a sweet, sensual, loving pass at Phil. But Phil doesn’t open his stupid eyes, the blockheaded FOOL! Drop the meandering Jew-hater and never let this beauty go!

There is such a thing as being too much Gentleman. Are we in Agreement?