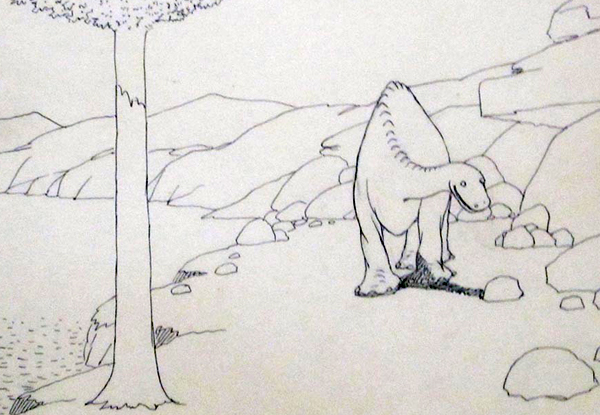 Gertie spies a tasty rock to help balance her diet.

The first Cartoon, Movie Maniacs! GERTIE THE DINOSAUR is an animated, silent, black-and-white short film, written, produced, directed and animated by cartoonist Winsor McCay, and for its innovation, ingenuity and primacy, we forgive it for its many shortcomings.

The story is brutally banal: A man makes a bet that he can animate a dinosaur, shows off the results at his Illuminati meeting, and is paid. However, the art of cartooning itself was jump-started with this winsome trailblazer. 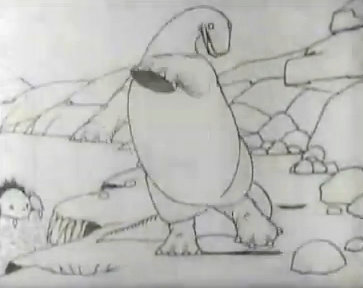 Film historians might argue that GERTIE was preceded as a cartoon by many other contenders: James Stuart Blackton’s HUMOROUS PHASES OF FUNNY FACES (1906), two of McCay’s own works (the short films LITTLE NEMO, 1911, and HOW A MOSQUITO OPERATES, 1912), the many short animated films of Émile Cohl (called “The Father of the Animated Cartoon”), and many works from one of the pioneers of modern film Georges Méliès. Though all these works were in the “cartooning” wheelhouse, GERTIE is the first to use this particular frame-by-frame animation technique that would be the basis of all cartooning processes to come.

There is a live-action prelude to the actual GERTIE cartoon, where the cartoonist himself, Winsor McCay, is being driven along with a few other doughy white men in hats and suits, all crushed into one o’ them new-fangled auto-mo-beels. They get a flat outside the American Museum of Natural History, and decide to visit the Museum while their white slave fixes the flat.

At this point, we must note the cultural atmosphere into which GERTIE was born:

McCay used the cartoon in his vaudeville act until his act was closed down, so had to produce this prelude for theatrical release to “explain the cartoon.” (Almost too hard to even imagine the different social climate!) 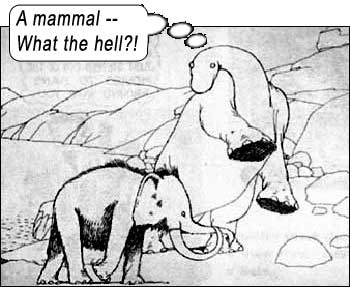 When the doughy white guys stand before the “Dinosaurus” skeleton in the Museum, McCay makes his bet with another cartoonist, George McManus, that he “can bring the Dinosaurus to life with some drawings.”

(The Dinosaurus skeleton is the infamous Apatosaurus (at the time incorrectly called Brontosaurus) with an incorrect skull! The museum mounted the bones in 1905 and, having no head for the skeleton, mounted a Camarasaurus skull, to the chagrin of paleontologists for decades, only replacing it with an Apatosaurus skull when the museum refurbished its dinosaur exhibits in the 1990s.)

McManus visits McCay after he is done drawing all his frames, and McCay explains – in an attempt at mansplaining the process of cartooning to an obviously bewildered 1914 audience more worried about rations and bombs than dinos and frames: “I made ten-thousand cartoons, each one a little bit different from the one preceding it.”

Then an attempt at Comedy: McManus wants to view some of the frames, so McCay loads up a pissboy’s arms, seemingly arbitrarily grabbing piles of drawings, even though we imagine these drawings must be returned to these piles in meticulous order. (Why must they even leave this room? Can’t McManus come up one flight of stairs to see these drawings?) Pissboy is piled on until he cannot see in front of him and can hardly walk with the pile (does McManus have to see this many to get the point?), and takes a tumble down the stairs in an Abbot-and-Costello-like whoop-de-wheeeuw.

McCay unveils his animated cartoon at a dinner, to the upper class twits who were in the automobile and witnessed the bet…

The cartoon itself is nothing spectacular. It is the fact of its existence that is mind-bending. There had to be THIS – this first glimpse of what potential this art-form held – for the industry itself to get to FANTASIA or TOY STORY. 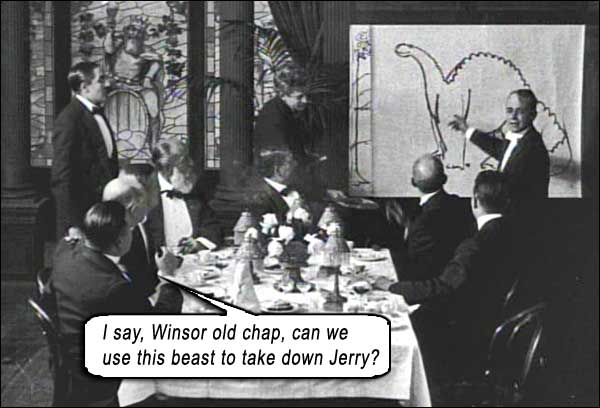 There is no great plot. There is Gertie the dinosaur (anatomically resembling that Apatosaurus skeleton, complete with the wider Camarasaurus skull), walking up to the camera, amidst a background of rocks and a lake, and performing basic tricks at the cartoonist’s behest, like raising her left foot then right foot, eating a rock, eating a tree, and picking up a passing mammoth by the tail and hurling it into the lake. She scratches her head with her tail, dances on her hind legs (no one would mistake her for the brachiosaur that Sam Neill gasps up at, “It’s – it’s a dinosaur!”), and then Gertie picks up an animated version of McCay and walks out of frame with him on her back.

Again, we note the differing cultural norm visibly displayed in the cartoon – as the animated McCay holds a WHIP, and uses it on Gertie to make her walk off. Really? Even though she understands English quite well, demonstrated by her performance of his banal requests, and “Did you see the four-winged flying lizard?” to which she nods.

It is a simple line drawing, black and white, animated well, in that the character exhibits weight and fluidity, with title cards inserted. And it was done The Hard Way. Apparently, Winsor McCay and his assistant John Fitzsimmons drew each frame from scratch, even all the non-moving backgrounds! There was no process yet for transparent cells over stable backgrounds, there was no machinery invented yet to make any of this new process convenient! Standing on the shoulders of all who came before him, Winsor McCay invented the cartooning process. And, ironically, his process has been superseded by so much better tech that it has become…