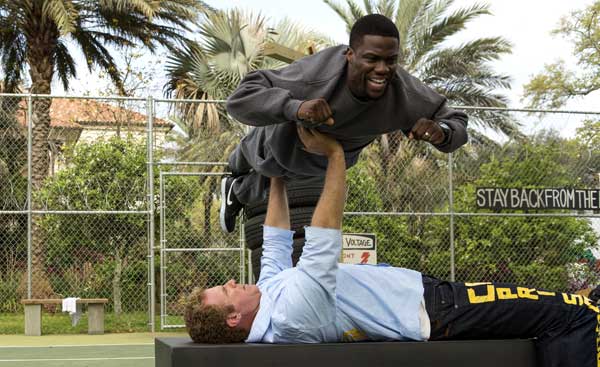 A white milksop businessman (Will Ferrell), sentenced to jail for a crime he didn’t commit, enlists the aid of a black car washer (Kevin Hart) whom he thinks has done jail time, to help him survive incarceration.

Formulaic fish-out-of-water story with obvious plot and results, GET HARD is yet another vehicle for Kevin Hart to shine in, doing his Vince Vaughn Black (in what seems to be his 20th movie this year alone); while Ferrell coasts along as usual, allowing the comedy to hit him in the face inadvertently, rather than delivering it proactively.

Co-written and debut-directed by Etan Cohen, GET HARD walks us into a racist shitstorm. Based on a racist premise (the inherent belief that all black men have done jail time), it only gets racist-er. Then it piles on swearing in place of gags. A desperate ploy that simply proves there are no good filmmakers in the vicinity. (Having an R-rating doesn’t mean you have to say “fuck” so many times. Someone forgot to tell writers Jay Martel and Ian Roberts, who channel their inner grade-schoolers for the juvenile dialogue.)

Craig T. Nelson plays Ferrell’s one-dimensionally slimy boss, and Alison Brie is Ferrell’s one-dimensional fiancé. Edwina Findley Dickerson is Hart’s two-dimensional wife. There is more attention paid to the black family’s normalcy, to balance the Richter scale racism and bring it back down to a manageable level. A black gang of thugs (featuring T.I and Ron Funches) tips the racism back up to where Whitey is comfortable with it. A gay bar features T.J. Jagodowski, who is now more famous as “the blond guy from the Sonic commercials.”

Kevin Hart is really the only person worth watching. With each movie role (starring or supporting) he seals his place as the new African American IT-boy, the go-to comedian for roles that used to be Eddie Murphy’s or Chris Tucker’s. Supreme confidence, shotgun delivery, lightning role-playing, a whirling dervish of loudmouth energy. We cannot tell whether he is scripted or unleashed to ad-lib, as he loads so much of himself into the delivery. Witness the genius scene in “The Yard” where he switches between three characters in quick succession. In the grandest tradition of Jerry Lewis or Jim Carrey, he alters voices, stances and mindsets in milliseconds, the one physical cue to differentiate the characters, his wool cap – black “Lee Roy” wearing it normally, Mexican “Carlos” wearing it down over his eyes, and gay “Dante” taking it off. An astounding performance that leaves us – and Will Ferrell, and Ferrell’s character – completely befuddled!

Movie is a puddle of clichés, sprinkled with a few laughs and the usual mundane Will Ferrell shtick, but watching Kevin Hart – I’m totally hard.