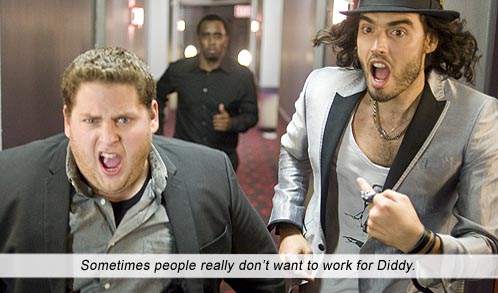 Going Greek: it only hurts if you’re sober.

Drugs, bitches, rock stars, alcohol poisoning – geez! GET HIM TO THE GREEK is like one of my regular Tuesdays.

In this Judd Apatow-produced road movie, Aaron Green (Jonah Hill, looking like a grounded zeppelin) has three days to get British rock legend Aldous Snow (Russell Brand, intensity of a charged defibrillator) from England to Los Angeles, for a 10th anniversary concert at the Greek Theater.

Sean Combs (or whatever his fad name is now: P-Diddy, Puff Daddy, Puffy, Diddy, Poffy, et al.) brings the pain as the record executive and self-proclaimed “mindfucking expert” Sergio, who orders Green to escort Aldous to the Greek, and then turns up mid-journey to stroke the furry walls with Green when Aldous slips him a Jeffrey.

Written and directed by Nicholas Stoller, GET HIM TO THE GREEK is a delicious slice of rock and roll madness and simultaneously a vacation from the thinking part of your brain. The hedonism and gauche antics of Aldous may be drawn from rock star mythos, but the simplistic idea of a concert at the Greek Theater being staged a few days from its inception is patently brainless.

Yet that is the ticking clock: get the rock star from England to America in three days for a gig which we just brainstormed last week; no need to call agents, licensing companies, production personnel or band members; no need for rehearsals, soundchecks, hiring gear; no need for contracts, negotiations, safety regulations; no need to even call the Greek Theater to see if they’re booked – just plan the concert and everything magically falls into place. In this movie world, the hardest part about putting on a concert is having the artist actually appear, whereas in the real world, just negotiating the blue M&Ms on the rider is a three-week blood-letting ordeal.

Brand’s performance reminds me of a quote from The New Yorker Apr 2007, Sasha Frere-Jones writing about Prince: “When he simply cocked his head and smiled, it seemed like an act of public lewdness.”

We are witnessing the launch of a superstar.

Like every Apatow piece, GREEK takes strange dark turns and creates sweet captured moments that seem all the more amazing for their randomness. After the banal, laugh-out-loud scene of Green shoving heroin up his bumhole to smuggle it onto a plane for Aldous, there is sudden silence in the audience when Aldous cusses out Green for destroying the heroin, demeaning Green for not understanding addiction and yet demeaning himself for being a slave to it. Scenes like this keep Apatow miles above the usual fare of lowbrow comedies that are his closest rivals, yet nowhere near him.

Though it’s done in the spirit of irresponsibility, Aldous takes a detour to visit his dad (Colm Meaney), a musician in Vegas, and through their eternal bickering, there is a moment where we sneak up on them sharing a song together – and then get right back to bickering. Again – Judd Apatow, you maniac genius!

There are the formulaic moments, when we realize Aldous’s arc involves reconciling with his girlfriend (Rose Byrne) who is sleeping with Lars Ulrich (playing himself), and that he necessarily must get off the drugs. Only by pleasing the craven hypocritical witchfynders who call themselves the MPAA will the film gain distribution; the beige activists at the Motion Picture Association of America literally blackmailing mediocrity into each and every American film release.

Creative direction, split-screening establishing shots, a thousand one-liners that you will miss from laughing so hard in the frenetic middle act with Diddy attacking everyone while stroking the furry walls. And whenever T-Rex’s 20th Century Boy is launched onto a soundtrack, it takes any movie to another level.

Apatow has maintained GET HIM TO THE GREEK is anti-drug and anti-excess – but the message is lost somewhat when the coolest cats in the movie are having this much corrosive fun roaring, rogering, gorging and puking while on drugs, drink and dames. The message to some might just be: We should all be so lucky to try a little excess sometime.

Just drop by my place any given Tuesday.

In FUNNY PEOPLE, plump Jonah Hill tells a slim Seth Rogen, “You shouldn’t have lost all that weight, man. There’s nothing funny about a physically fit man.” But someone should warn Hill that the converse is also true. While Jack Black, Chris Farley, John Belushi and Fred Flintstone may be pulling laughs with their acceptable rotundity, Hill’s girth in GET HIM TO THE GREEK is frankly disturbing, and a distraction to his comedic chops. As he approaches The Gabriel Inglesias he should remember that there’s nothing funny about morbidly obese either.

Drummer, Musical Activist, Overactor.
Since the early days of Metallica, every time we’d see Lars Ulrich, he’d be trying too hard to be some kind of outgoing, overacting, loquacious TV Personality. However, in this movie – playing himself – he pulls off a masterful subdued turn as Rose Byrne’s boyfriend. And what makes the role funny is that he’s playing himself – but for the first time he’s not overacting!