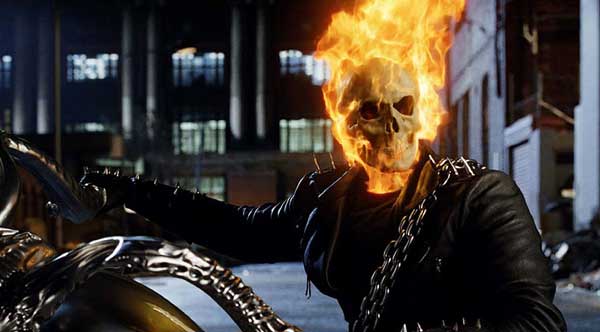 If there’s another word for idiocy, I think that word is GHOST RIDER.

Sloppy editing, juvenile direction and idiotic writing make this the number one feel-retarded movie of the year. And Nicolas Cage in eternal mourning-faced mode as the Ghost Rider doesn’t help any. He is stunt biker, Johnny Blaze, employed by the devil (Peter Fonda, embarrassing himself) to stop the devil’s son dominating the world. Oh yeh, and when he turns into Ghost Rider, his head turns into a flaming skull. For no reason other than it looks kinda cool.

Sam Elliott lends his balls-grit voice to the narration and appears as a supernatural gravedigger, but even that compounds the stupidity. His first lines narrate how every generation spawns a Ghost Rider, whose job is to collect souls sold to Satan. Okay, nice premise – now start confusing me… Seems the Wild West Ghost Rider (from the 1800s, I’m guessing) “outran the devil himself” because he didn’t want to collect 1000 souls on one particularly meaty contract.

Where to start with the stupid questions, knowing there’ll be stupid answers at the end of all of them? Is it within the Ghost Rider’s capacity to discern how many souls the devil should be bagging? He’s just an apprehender, a bounty hunter; it’s like bequeathing that redneck moron Dog the Bounty Hunter or one of those Nazi cops from COPS jurisprudence and the ability to execute sentences on nothing but their own cognizance, when we all know they are merely apprehenders with zero powers or intelligence beyond clicking on cuffs.

So what about the Rules for Supernatural Beings? How fast can the devil run? And since the Ghost Rider is a supernatural being himself, how fast was HE actually running to outrun the devil? And was he galloping across desert plains, or in some other dimension? If in some other dimension, were they “running” physically – with feet touching the ground for traction, or in some invisible medium? Please mail all answers to the building on the corner behind the imaginary goblin.

Every single minute of GHOST RIDER raises more idiotic questions about supernatural rules. For example, the GHOST RIDER is a supernatural being, so when evil supernatural beings fight him (beings fashioned from earth, air, fire and water), why do they bother punching each other? They’re not operating on the same rules we are in the physical plane – for cryin’ out loud, when a truck runs into the Ghost Rider he is unharmed, so why does the watery being even think he could debilitate Ghostie by punching him? Or hanging him by the neck with a chain?

Later, a supernatural being made of wind laughs when Ghost Rider tries to punch him, then he eats crow when the Rider whirls his whip around and somehow creates a vortex of fire that sucks the wind being into nothingness. Riiiiight…..

At one point, Ghost Rider saves a girl from a pursesnatcher (a very young Rebel Wilson) and then condemns the pursesnatcher to hell; I guess pursesnatching is a bad enough crime to warrant eternity in hell, it’s not as if the pursesnatcher had lied America into a false Iraq war, causing the deaths of 100,000 people and consigning Amierca to a trillion-dollar debt which four generations would have to shoulder. It’s the SUPERMAN conundrum: while the superhero saves a cat in a tree, a million African children are dying of starvation. Priorities like a dolphin, this Ghostie guy!

Marvel really screwed the pooch with this D-Lister; Stan Lee didn’t even bother making a cameo. The origin tale works gangbusters as a comicbook, but in this age of Marvel semi-realism (SPIDER-MAN, X-MEN, PUNISHER), GHOST RIDER gasps for credibility with its insanely convoluted mythical storyline and rule-less landscape.

Frumpy Eva Mendes is Johnny Blaze’s long-suffering romantic interest; Wes Bentley‘s performance as the devil’s son is so watery it resembles American beer; and Donal Logue tries overacting to save the movie. Didn’t work, but at least he’s got some cheese for his demo reel.