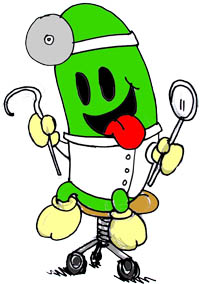 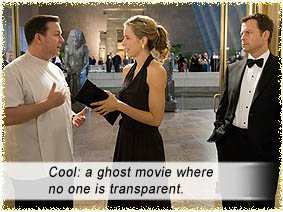 Leonard Maltin’s splash-review for GHOST TOWN reads, “Clever, Heartfelt and Funny!” (Don’t you love the way they capitalize the adjectives like they’re proper nouns?) As much as I loathe splash-reviews, Maltin is right.Though his four-word splash is somewhat less egregious than the one-word splash (“Terrific!” – New York Times; “Spellbinding” – People Magazine; and the most egregious of all, “A Roller Coaster Ride” [insert any name, paper, institution]), Maltin could be talking about any of ten thousand other films.

Of course, it is no effort to simply Google Maltin’s review to see how he qualifies all those adjectives. But that’s too much work. You’re here already.

I’ll break it down for you:

CLEVER: We’ve been inundated with ghost lore since before Jesus Christ (the most famous ghost), but writer-director David Koepp actually puts a great new twist on why ghosts linger on Earth: not because they have unfinished business, but because the people they are connected to are not ready to “let them go.” Take that, JC.

HEARTFELT: Chemistry between the unlikeliest of leading men, Ricky Gervais, and his smokin’ leading lady, Tea Leoni, is palpable, which is a testament to the self-effacing Gervais’s talent. Or a testament to Tea Leoni’s hotness.

FUNNY: Ricky Gervais. Razorwire wit, rapid-fire delivery, bringing his anti-social, misanthrope everyman from the original-and-best THE OFFICE and EXTRAS, rending our deepest sociological fears from their moorings near our black selfish souls and exposing them painfully. Comedy is pain. Ricky Gervais will hurt you until you laugh. Making those “ooweh!” vomit sounds helps.

Gervais is dentist Bertram Pincus, anti-socialite, misanthrope; his credo the same as Daniel Plainview’s from THERE WILL BE BLOOD: “I look at people and I see nothing worth liking.” Only not in a scare-the-pants-off-us way. Greg Kinnear is Frank, a new ghost (he dies in a deft directorial trick as the movie opens) who definitely has some unfinished business – he’s having an affair and trying to stop his wife, Gwen (Tea Leoni) from having one. Ghost Frank can still see and hear people, but no one (except we audience) can see or hear him – Movie Ghost Lore 101.

When Bertram “dies” on an operating table for a few minutes, he awakens with the power to see and hear all the wandering ghosts in the city. A breakthrough for the ghosts, as they start bothering him to “finish their Earthly business” so they can move on.

Frank is the tacit head ghost, who brings his predicament to bear most forcefully on Bertram – to drive Gwen’s new lover out of her life. Kinnear brings pathos and poignancy to what starts out as a simple one-dimensional (literally) character. And Tea Leoni, all golden hair and perfect features, is as luminous as those ectoplasmic effects that ghost movies usually overdose on. Billy Campbell plays Gwen’s lover, in an under-appreciated corporate-cheese performance; we realize there is nothing wrong with him as Gwen’s lover, just that there is more chemistry between Bertram and Gwen.

It is when Bertram and Gwen really fall for each other that we are subjected to a little annoying Hollywood-Character-Arcing.

Other than that, the other CLEVER aspects that Maltin might be referring to are David Koepp intelligently keeping the special effects to a minimum, in a movie which could obviously fall into the trap of overdosing on CGI (it is, after all, a story about PEOPLE, dead and alive). Even though Bertram does the Bride-Running-Through-Streets gag, it is subtle, and the feel-good ending does not bludgeon us like raw Kate Winslet (no bull-rush at one another and kissing passionately, no uplifting music – simply a romantic moment of possibility). In the “spirit” of good comedy, Koepp did two-camera takes on the exchanges, rather than cutting back and forth between actors, the improv-generating Gervais preferring this method, “Two good comic actors can beat an edit every time.”

GHOST TOWN beats it. To death. Er, well, to afterlife.