Ghost in the Machine.

Ewan McGregor is hired as a GHOST WRITER to liven up the memoirs of disgraced British ex-Prime Minister Adam Lang (Pierce Brosnan), an obvious analog for Tony Blair puling at the feet of the American administration then rewriting his legacy to make it sound like he wasn’t a lapdog. 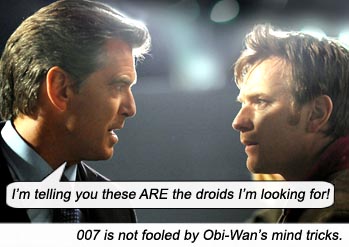 Spirited to a hideaway island, presented with Lang’s sacrosanct manuscript by a Veddy British Kim Cattrall (as Lang’s assistant, in an actual acting role after a decade of playing a MILF slut), and told of the last Ghost’s drowning death under mysterious circumstances, at first Ewan’s Ghost job is all about injecting flair into a chalky tome, but just by being a cog in the Prime Ministerial household, he starts uncovering all manner of disturbing facts about the ex-PM, involving torture, misfeasance and maybe even murder. (Those drowning circumstances start to look less mysterious every day – especially when those doughy guys who may be carrying guns start chasing him around the ferry.)

From a novel by Robert Harris (The Ghost), it may sound like your basic Hollywood action-drama, but Roman Polanski writes, produces and directs this edge-of-your-seat, sophisticated political thriller with an eye towards an intelligent audience who can follow a plot that doesn’t spell out Bad Guys by three-day growths and Middle Eastern glares.

Ghost finds himself torn between his objective biographical job (almost like a lawyer representing a known murderer) and ethically turning in damning evidence that he uncovers. And the Prime Minister and his staff are caught in the conundrum of providing enough info for the writer to do his job, yet closing a web of security around him when they realize this intelligent person is putting two and two together and coming up with Felony.

Ghost even realizes that exposing Lang’s crimes will achieve nothing; Lang “is just going to retire and tell the war crimes council to go fuck themselves” – exactly what Bush-Cheney are doing in the real world.

Tom Wilkinson is an old Oxford college friend of Lang’s; contemptuous, snide and hiding something; when Ghost is leaving his isolated estate after an unproductive visit, Wilkinson gives the ominously funny advice, “Be sure to make a right at the bottom of the drive. If you turn left, the road will take you deeper into the woods and you’ll never be seen again.”

And Olivia Williams is Adam Lang’s hot wife. Hot hot hot. Forbidden hot. Seducing the Ghost Writer with her sensual bluntness; holds his hand in the car, appears at his bedroom door wet, wearing nothing but bathrobe, climbs under his blankets and lies quietly, waiting. The affair doesn’t seem prurient or forced, it’s very organic and humorous, and though we know she is leading him, we dare not think too much on it – as he does not. It’s the Prime Minister’s wife! Is it merely a lonely spouse seeking solace in the arms of a hip, young trainspotter, or is there…? Of course there is – some other agenda…

Memoirs of a Ghost Cuke

A scandal breaks on Adam Lang abducting four Middle Eastern men while he was PM and sending them to another country for “enhanced interrogation”; a situation culled from the torture stylings of Tony Blair when he was Bush’s bumboy. Lang and his damage controllers have cynical, straightforward meetings over how deep the shit and how best to spin it – we can imagine these word-for-word conversations taking place in Bush’s hellish domicile after Abu Ghraib and Guantanamo.

Brosnan never flinches from his unsympathetic role as the weak PM. He unapologetically believes in the utility of torture, and explains his rationale in a passionate frenzy: “You know what I’d do if I was in power again? I’d have 2 queues at airports: one for flights where we’ve done no background checks, infringed on no one’s civil bloody liberties, used no intelligence gained by torture – and on the other flight, I’d do everything we possibly could to make it perfectly safe, and then we’d see which plane the anti-torture people would put their bloody kids on!”

A reminder that the Machine doesn’t like its machinations laid bare; shades of Dealey Plaza, shades of Valerie Plame; the “highest” people using the lowest means; reminding us there is but a shade of difference between the lowest scumbags and the highest office.

Go Fiche.
Back when people used to search microfiche or the library for info, the info would always be found a little too conveniently – to keep the movie kinetic, of course. But nowadays, that’s exactly what internet search engines do – find information instantaneously!

From the comfort of his hotel room, Ghost does a Google search for all the suspicious people he is dealing with – and lo! he makes connections to crooked corps, unethical business deals and underhanded relationships immediately. And it’s not “movie magic” or “dramatic time compaction” any more – the information retrieval is now happening in real time!