They ain’t ‘fraid o’ no jock-chafing.

Why am I drippings with poo?

A river of slime threatens New York and brings the Ghostbusters out of retirement. Any excuse to touch tips again…

GHOSTBUSTERS II finds original Ghostbusters Ray Stanz (Dan Aykroyd), Egon Spengler (Harold Ramis) and Peter Venkman (Bill Murray) reluctantly re-donning the taupe onesies and re-shouldering those unnecessarily heavy ecto-gun backpacks to save New York from its own badness, manifested in a subterranean river of evil slime that is intruding on the surface world. Which accounts for Rudy Giuliani.

“Reluctantly” because director Ivan Reitman and writers Aykroyd and Ramis did not want to do a sequel. Columbia Pictures iceholes had their way and – voila! More slime. And “unnecessarily” because apparently, those backpacks were as heavy as they looked, which is kinda stupid; I mean, they didn’t really have to contain nuclear fission ion-reactors – they just had to be empty props. That’s one over-zealous prop department.

The opening title card displays a level of arrogance that also indicates how successful the first movie was. It simply states: FIVE YEARS LATER. Takes for granted we know the events of the previous movie. And here we are now – in a world where the Ghostbusters are out of favor with the public and resigned to appearing at children’s parties, where they are mocked by annoying 80’s kids. Venkman hosts a TV psychic show that screams charlatan, Egon is experimenting on human emotions, and Ray owns an occult book store.

And Winston (Ernie Hudson) is the token black guy.

Bizarre incidents with her infant baby leads Dana Barrett (Sigourney Weaver) to seek out the Ghostbusters’ help once more. She is no longer a cellist, but an art restorer, working at a gallery run by effete Eastern European émigré Janosz Poha (Peter MacNicol in an eccentric performance that is part wormy-guy/part Dracula), who worships an ominous painting – that of Vigo the Carpathian (Norbert Grupe). The Ghostbusters would eventually battle against Vigo come to life from the painting and trying to possess Dana’s child. MacNicol steals the show, fully absorbed into his Transylvanian/Carpathian personality, complete with ambiguously Euro accent, impotent jealousy of Venkman as Dana’s suitor, and an effete physicality that makes us wonder whether he has ever opened a pickle jar without the help of a stronger woman (or daddy-bear). Funniest moment in the film is Janosz “shaking hands” with Venkman. 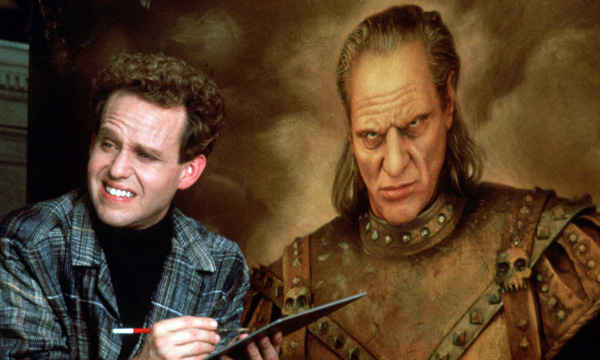 “Oooh, I shudder. Why is this I am feeling so trunculish?”

As with the last film, GHOSTBUSTERS II has two good opening acts, and a third act that falls flat on its ectoplasmic spirit ass. Maybe it was the technology, because they were again trying for a bombastic, supernatural end to this caper, and the effects just didn’t have the necessary oomph at the time. Still, we could listen all day to Bill Murray’s riffing, or Janosz simply talking about anything in that accent, or Egon and Ray conducting experiments with toasters; even sequences like Venkman, Egon and Ray masquerading as maintenance men, or judge Harris Yulin inadvertently summoning evil spirits with his anger are all fun, because in those instances the movie isn’t trying to be bigger than it can achieve.

Though it seems like a joke in 2016 to talk of a black man’s “token-ness” in 1989, we see just how the filmmakers mistreat Hudson in the courtroom scene: At the start of that scene, Winston leans to the three Ghostbusters on trial and comments about the judge, “Pretty open-minded guy, huh?” As soon as the ghosts appear in the courtroom, the three Ghostbusters must save the day by donning their ecto-guns. But where is Winston? He was clearly here for the opening of the trial. Are we to believe he screamed and ran away with the crowd? At least, they make up for his forgotten presence when later Venkman takes Dana to dinner and the three Ghostbusters left to explore the underground slime are Egon, Ray – and Winston!

A silly plot point when all the guys turn up like boy scouts, beseeching Venkman to come down to see the slime – and Dana treats them like lepers, because she wants to be taken to dinner by Venkman. Hang on! These are the same guys you just asked for help in your haunting case as a favor to you – and this excursion pertains directly to your case – and you’re treating them like they’re on a boys’ nite out, being a bad influence on your man?

Dana and Venkman ended GHOSTBUSTERS with that Michael Jackson-Lisa Presley kiss, so the fact that Dana has a kid that is not Venkman’s does not sit well within the story. They exposit a history of Dana having dated and broken up with Venkman, before she got pregnant to an orchestra musician, but it seems like the writers needed a kid for the plot, and yet they didn’t want Peter to look like a deadbeat dad by leaving Dana with a kid – so they made it someone else’s kid. Which is very untidy conceptually. Wouldn’t there have been more at stake, and a better reconciliation/redemption if it was Venkman’s ex-wife and kid?

Annie Potts’s nasal secretary Janine, and Rick Moranis’s oblivious nerd, Louis, are both fleshed out here, with Louis now the Ghostbusters’ well-intentioned yet incompetent lawyer. The second-funniest moment is Louis questioning Venkman in court, while Venkman prompts him; he then asks Venkman, “Do I have any more questions?” and Venkman replies, totally deadpan, “No, we’ve helped them enough already.”

While babysitting together, Annie and Louis get it on. Nerdgasm!

By the time the third act rolls around, and the Statue of Liberty is walking through Manhattan with the Ghostbusters riding her crown, to thwart Vigo’s possession, too many lackluster story elements and underwhelming effects make it hard to stay invested. Firstly, the mayor (David Marguiles) doesn’t believe the Ghostbusters about the supernatural threat – the same mayor whose ass they saved in the last movie; reminding us of the JAWS mayor who did the same thing. Then they struggle in a very loose fashion with Vigo (voiced by Max von Sydow – the EXORCIST himself – trying to possess someone!), and in a flurry of ectoplasmic jism, it’s all over.

Rick Moranis gets to suit up and shoot an ecto-gun in the climax. To add to the feeling of nothing important happening. Janosz wakes covered in slime and gets the third funniest moment in the movie: “Why am I drippings with poo?” Because…

Norbert Grupe aka Wilhelm von Homburg (1940-2004)
Astounding biography about the B-character in this film, the ghost of Vigo.