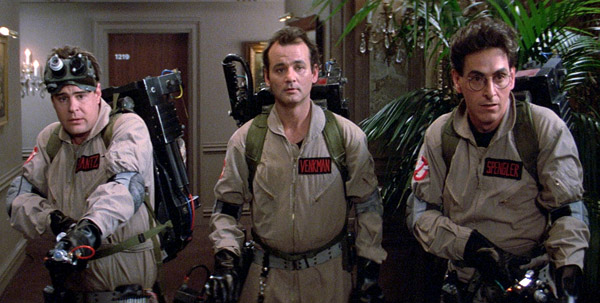 When the most horrible apparition you see is your remake…

Starts off Solid, Ends up Ectoplasm….

GHOSTBUSTERS has a lot going for it – an original story (by Dan Aykroyd and Harold Ramis, about three paranormal investigators in New York opening a business as ghost exterminators), lovable characters, great comedic performances (notably from Bill Murray), and two excellent opening acts that are alternately humorous, intriguing, chilling and action-packed. Unfortunately, in the third act, the filmmakers sacrifice the strong story to bombast and, ironically, go out with a whimper rather than a bang.

Just because Sony and director Paul Feig royally screwed the 2016 reboot, doesn’t mean this Ivan Reitman-directed original becomes something greater than the slightly above-average movie it always was. It is undoubtedly popular, contributing to filmic vernacular (with its iconic process shots and ghostbusting scenes), and lending many quotes to the culture (“He slimed me,” “So… she’s a dog,” “I ain’t ‘fraid o’ no ghosts!” “Don’t cross the streams!”), but the weak third act is insubstantial as ectoplasm.

Dan Aykroyd is Ray Stanz, the pragmatic mechanic, loquacious in the ways of paranormal phenomena; Harold Ramis is Egon Spengler, the professorial leader, calm, didactic, reassuring; Bill Murray is Peter Venkman, who, though surrounded by provable psychic phenomena, retains a skeptic’s demeanor, more concerned with using his status as paranormal investigator to get laid. Murray brings a new approach to the funny-man/straight-man dynamic: Aykroyd and Ramis are clearly meant to be the straight men to his clown, yet Murray’s deadpan insouciance makes him seem like a straight man as well (we’ve heard it before in CADDYSHACK, STRIPES, and of course, SNL), as he delivers hilarious content without indicating. A very British tactic. (No wonder it’s so good…)

After being kicked out of their university for not producing any results in their psychic studies, Ray, Egon and Venkman rent an old firestation, recondition an ambulance (that would become as iconic as the Batmobile as it wails through the city), and are hired as “Ghostbusters” to capture wayward spirits around New York, entrapping them in “ecto-containment” units. 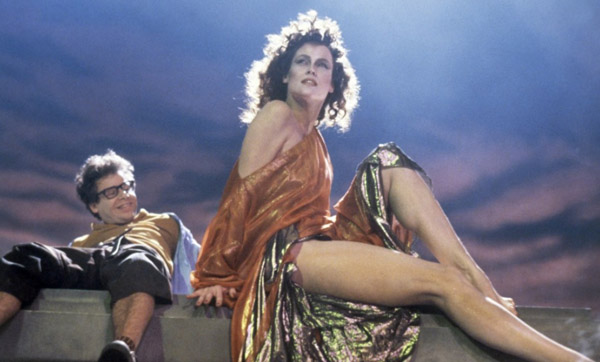 Now that’s the kind of demon I could get behind…

Dana Barrett (Sigourney Weaver, hot off ALIEN and THE YEAR OF LIVING DANGEROUSLY) is a client who employs the Ghostbusters to rid her of the demons haunting her apartment. Venkman (Murray) is all over her like white on ghosts. I’ve always felt Weaver was a little miscast as the love interest to Murray’s sleazy pick-up artist. Earlier, we saw Venkman try to pick up a young blonde under the pretense of psychic testing. There is no reason to believe he doesn’t view Dana as just another conquest; matter of fact, he scams his way into her apartment with an obvious fake spook-tester gadget and tries to bed her right there with pick up lines. The thing is: every guy in the audience wishes for Venkman’s level of devil-may-care when coming onto chicks. And though Venkman’s approach is hilarious, the filmmakers have already established him as a pussy hound, so we know his propositioning is insincere. Which makes the film’s conclusion very strange indeed: Dana and Venkman share a full-mouth kiss as if they’re an item. Why? They were never “running from danger together”; even before their first date, she was possessed by a demon dog; their one interaction was kicking him out of her apartment. I digress…

Speaking of bad relationships, this was the period in history when Dan Aykroyd had just made off with Paul Stanley’s girl! On the KISS album Creatures Of The Night (Oct 1982), Stanley wrote the beseeching I Still Love You for his then-girlfriend, actress Donna Dixon (BOSOM BUDDIES), as he discovered she was growing distant while he was on tour. Then on Lick It Up (Sep 1983), Stanley’s bitter paean A Million To One was also for Dixon, after he had lost her. Unbelievably, to THIS guy. I digress even more…

Rick Moranis is whining comedy gold as Dana’s infatuated neighbor Louis, who would also be possessed by a demon dog. Annie Potts is the Ghostbusters’ nasal secretary. (She is almost set up as a love interest for Egon, but the opportunity keeps passing. It’s just another watery element to this film regarded as a classic for various reasons other than good filmmaking.)

William Atherton is perfect as the slimy EPA rep trying to investigate the Ghostbusters’ facility for noxious and hazardous waste chemicals – hey, he’s the environmental guy! Back when that meant being a stiff-suited prick. Nowadays, he’d be the star! He shuts down the Ghostbusters’ containment facility and inadvertently looses thousands of ghosts into New York, to the ominous strains of Magic (by Mick Smiley).

The soundtrack is by the magnificent Elmer Bernstein (THE MAGNIFICENT SEVEN, 1960), and the source music is modern and hip (by 1984 standards, of course), from The Thompson Twins to The Trammps and Laura Branigan, with a title song from Ray Parker Jr., stolen from Huey Lewis and the News, that you can’t get out of your head.

(Parker’s song Ghostbusters, was released in May 1984, long after Lewis’s I Want A New Drug, Jan 1984. Lewis sued Parker and they settled out of court. In 2001, Parker sued Huey Lewis for speaking publicly about the fact that Ray Parker Jr. stole his song. Apparently there was a clause that prohibited Lewis from speaking about the case. The gall of plagiarists! Here’s the clincher – both songs: insipid!)

The ghost effects are process shots, cartooning and stop-motion. The food-gorging, pudgy ghost “Slimer” was styled after their recently-departed friend, John Belushi, who was reportedly scheduled to work on GHOSTBUSTERS. Now that would have propelled the movie into a higher astral plane.

Now onto that third act, where everything falls apart. There just doesn’t seem to be any urgency in what should be climactic scenes: the Ghostbusters arrive at the haunted building where a threatening entity named Gozer is about to end all creation, and the first thing that happens is – the ground shakes and they fall into a pit. Silence. They climb out, to crowd cheers. Uh, okay… (Was that meant to be Gozer shaking the Earth? Don’t know, don’t care.) Then they climb 22 flights of stairs to Dana’s apartment. Slowly. Is this the way you build tension to a grand confrontation, Reitman?

Before Gozer’s vanilla cameo, there’s even a missed gag. When they arrive at Dana’s apartment, they see an ominous flight of stairs. After painfully ascending 22 flights, you’d think there’d be some sort of callback here, as Ray asks, “Where do these stairs go?” And Venkman simply replies: “They go up.” Talk about dropping the ball! 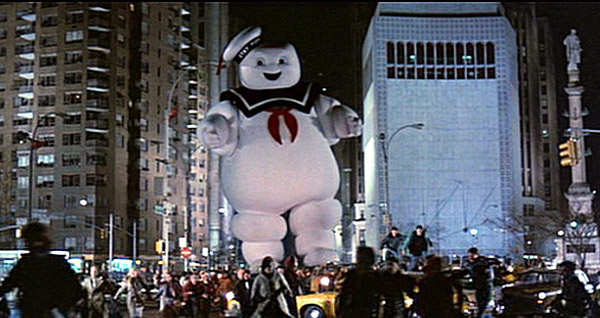 And then there’s ineffectual Gozer. The master of destruction that the devil dogs were heralding. A spinner chick with red eyes, dressed like David Bowie as Major Tom, and I swear, she looks like one of my past girlfriends. And this master of death apparently possesses ZERO POWER to kill people. What else can we deduce from her supposedly lethal attack? She asks Ray if he is a god. He replies “No,” to which she retorts, “Then die!” and shoots lasers from her hands at the Ghostbusters. This achieves nothing except pushing them to the edge of the roof. Gozer just proclaimed she was going to kill them and she couldn’t do any better than “pushing” beams? That were not even strong enough to push them off the building? Then she disappears and tells them their first thought will be the manner of their destruction. Oh, so you couldn’t do the job yourself, and now you’re putting it on THEM to destroy themselves? What if they were mentally strong enough not to think of anything?

Luckily for Gozer, Ray inadvertently thinks of the Stay Puft Marshmallow Man, who appears as a gigantic 10-storey monster. Gozer’s disembodied voice proclaims “The Traveler has arrived!” blah blah – is anyone paying attention to the broad with the non-lethal lasers anymore, who disappears at the first sign of lasers being shot at her? Egon proclaims they should “cross the streams” to send Gozer back to her dimension, which involves shooting off while touching tips; in bath houses and in prison, they call that “sword fighting.”

Firstly, Gozer is nowhere to be seen, and they’re shooting at her porta-potty at the top of the stairs, while Stay Puft catches on fire and melts. It’s not a very powerful hero-versus-villain climax. Secondly, they seemed to do fine NOT crossing the streams with every other ghost. Why the sudden boolshitus rationalization for this one? Thirdly, after they defeat Gozer, everyone’s celebrating like the world is saved… but what about those thousands of ghosts released into the city? (Slimer even flies at the camera as the last stinger before the credits.) And then there’s that kiss between Dana and Venkman, worthy of Michael Jackson and Lisa Marie Presley…