Ghost of Dickens Past turns in his grave.

Many filmmakers still feel obligated to pay homage to the marriage and reproduction rituals of the mainstream culture.
— Keay Davidson, Carl Sagan, A Life. 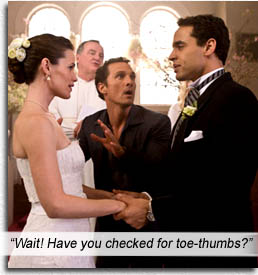 Men, when you’re dragged by your fem-boss like the vagina-whipped pussy you’ve become, to see GHOSTS OF GIRLFRIENDS PAST, at least take solace in the film’s educative axioms during its first act.

“The power of a relationship lies with whoever cares less.”
“It’s your feelings for her that are killing your game.”
“…marriage is an archaic and oppressive institution that should have been abolished years ago…”

Of course, these truisms are regarded as misogynistic pap within the context of this pea-brained excuse for a romantic comedy (that men will say they enjoy in order to part a woman’s thighs); societal truths that women refuse to believe men believe.

Even if one were to regard romantic “love” as true, this movie itself – and all its characters – hypocritically denounce everything they claim to believe in at every turn with their unthinking, irrational, contradictory actions.

Professional Philanderer Connor Mead (Matthew McConaughey) and Jenny Perotti (Jennifer Garner) are the couple just waiting to be paired. Director Mark Waters and writers Jon Lucas and Scott Moore make no bones about ripping off Dickens’s A Christmas Carol as the movie’s plot: a spectral playboy uncle (Michael Douglas) appears to arrogant bachelor Connor to warn him of three ghosts who will visit him to show him the “error” of his skirt-chasing ways.

These apparitions appear to Connor at his brother’s wedding rehearsal weekend, where Connor is busy getting drunk and going Larry David by telling it like it is: “…love is magical comfort food for the weak and uneducated; makes you feel all warm and relevant but in the end, love leaves you weak, dependent – and fat.”

Michael Douglas’s ghost is hilarious when he’s telling truths about staying powerful in relationships, but it’s all for naught, as he is stuck in a Chick Flick that will ultimately emasculate him and make him confess that philandering will leave you lonely. Never once considering that marrying a shrike whom you will eventually lose interest in will also leave you lonely.

Face it, whether you get married or not, you’re still going to end up a lonely old man. Or woman. According to Chick Flick Protocol, Not Marrying = Misery, and Marriage = Eternal Love. Never once considering that many married people are as miserable as many unmarried people.

Connor tells his brother: “You’re going to be miserable without her” – again, never once considering that he could very well be miserable WITH her.

Never once considering the reality that you CAN be joyful within a marriage. AND joyful without.

A man is only as faithful as his options.
— Anonymous (or maybe Gene Simmons).

The first annoying teen fem-ghost (The Past Ghost) shows Connor a veritable Gene Simmons smorgasbord of past flings, calling them all “relationships” and calling him an asshole for having them. But it stands to mathematical logic that it takes two to participate in a one-night stand.

With every woman being at least a 7, I don’t see the down side – until all of them start yammering at once trying to monopolize Connor’s time. Guess that screeching noise we’re hearing is meant to entice us into spending our lives with her…

In other words, none of these women gives any indication they didn’t DESERVE to be treated as shallow one-nighters. None of them is substantial – they are juvenile representations of women that a fourteen-year-old would conjure, not well-rounded personalities.

Connor, who is a famous avant-garde photographer of women, is then shown his past girlyman dates with Jenny; his search for true love supposedly at an end and him not taking the opportunity to “settle down.” But if he had settled down at that point, his success would have faltered, for it was the fire in his bachelorhood that gained him the financial and critical success.

None of this is taken into account because – Women Be Dreamkillers. It makes no difference how HIS career path might have derailed – as long as SHE be happy.

He tells her she’s gorgeous – but she’s Jennifer Garner. Should those lips really go with those cheekbones – or was there a mistake at the clinic?

Jenny insists Connor “woo her,” which he does, playing foosball and eating ice cream together and generally becoming female in order to pretend he doesn’t want to bed her – until Jenny, like all women, deludes herself that he “isn’t like other guys” and invites him to bed with a clear deluded conscience.

Then – after all her yammering about “taking it slow,” after all the bluster about wooing and playing foosball for the sake of playing foosball (rather than as foreplay) – when Connor rises to leave after sex, Jenny whines, “There are two types of women: the type you shag and leave, and the type you shag and snuggle.” Let me get this straight: HE has no say in the matter. Whether he needs to wake early for work, whether he is uncomfortable spooning, whether he just doesn’t like her that much, if he leaves, HE is the asshole.

The Future Fem-Ghost, all sinister in flowing white robes and mute, shows Connor Jenny’s wedding – to someone else.

During this “future wedding” scene, Jenny looks back at the church door regretfully, as if Connor might appear to halt the proceedings. So… women get married because someone – anyone – ASKS them to, not because they really love the person. Never once is it considered what a shallow, time-serving person Jenny is for allowing a man to think she is “in love” with him, yet hoping – longing – to be rescued from his embrace by someone whom she believes she loves more.

When Connor was bedding his revolving door of women, he was truthful in never promising any commitment – yet here this woman is promising her LIFE DEVOTION to a man she would rather not be with. If her chosen beau came along at any moment in her marriage, that marriage would not be worth the state contract it was scribbled on.

So after hammering home the idiocy that marriage will keep you from misery, the movie shows us explicitly how a marriage can BE misery (for her as she pines for her “True Love”; for the groom as well, as he will never receive her “true” love), yet it never recants from its demonstrably incorrect platitude. Demonstrated incorrect by ITSELF!

GHOSTS OF GIRLFRIENDS PAST is another in a long line of tiresome films where females prove conclusively they don’t know WHAT they want. If a man has Game, he must be denigrated as an amoral, emotionless philanderer (like Connor); if he doesn’t have game, he is a dweeb, like Breckin Meyer or his coterie of groomsmen even more pathetic than himself.

And the grandest irony is that, like all powerful men, Matthew McConaughey actually leads the profligate lifestyle portrayed in GHOSTS OF GIRLFRIENDS PAST. At certain times he may choose to settle for awhile on one favorite, at times he may be married – but – there isn’t a woman in the audience who wouldn’t gladly destroy any McConaughey relationship with another woman – true love be damned! – for a lick of that v-shaped man-chest and a night of that southern drawl.

Michael Douglas was right all along…