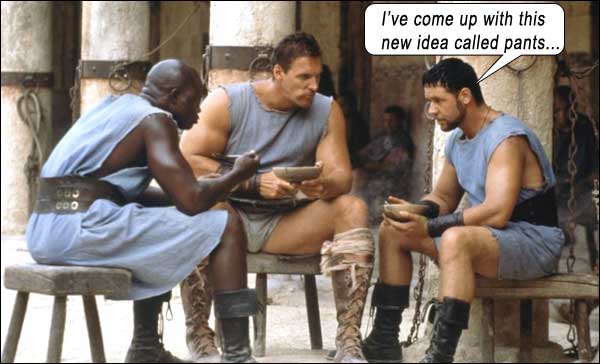 Truly GLADIATOR is the stuff of great fiction; a story so well-orchestrated and superbly told, there might well have been in Roman history a general who became a slave, a slave who became a gladiator, a gladiator who won an Oscar.

Russell Crowe is Ancient Roman General Maximus Decimus Meridius, commander of a fierce and loyal army that has conquered the known world under Emperor Marcus Aurelius (regal, world-weary Richard Harris). Maximus plans to retire to his olive gardens with wife and son, but the sickly Emperor has other ideas, bequeathing Maximus the stewardship of Rome over that of his natural-born son and rightful heir, the fey Commodus (Joaquin Phoenix). When Commodus discovers this slight, he cries a little, promptly kills his father, arrests Maximus, and gets progressively feyer.

Commodus then invents the James-Bond-Batman-Death, that is, don’t kill your nemesis quickly and efficiently in full view, order your incompetent men to take him somewhere and probably kill him if he doesn’t use his dangerous ingenuity and superior combat skills to escape. This also guarantees you are completely in the dark as to whether your enemy is dead, until he appears unexpectedly somewhere and vexes you.

This Maximus does, defying Commodus and leaving him terribly vexed.

Thereby arriving at Part Three of the slogan. In the interim, Maximus discovered his family was crucified by Commodus, which caused Maximus untold Academy Award-Winning Acting, subsequently collapsing in the desert and taken into slavery. The gladiator merchant, Proximo (Oliver Reed, gravel-throated, rheumy-eyed – his last performance before going to that great arena in the sky) handpicks the indifferent yet lethal Maximus to join his stable of gladiators (which includes neighborly Numidian, Djimon Hounsou and man-mountain Ralf Moeller). Proximo scores a gig at The Coliseum, for the pleasure of now-Emperor Commodus.

As Darth Vader thoomed, “The circle is now complete.” Break out the lightsabers.

There were arena skirmishes before this Coliseum, but the “Battle of Carthage” reenactment is the grandest rockstar battle for Proximo’s now-renowned gladiator troop, inspired and led by Maximus, as stirring and blood-pounding as BEN-HUR’s chariot race. GLADIATOR’s raucous, blood-glutted battle scenes are fitting successors to the “realistic” warfare of BRAVEHEART and SAVING PRIVATE RYAN (although I am still befuddled at how swords and knives make steely ‘shink’ sounds even if they’re just being swished about in the air!).

“Are you not entertained?” 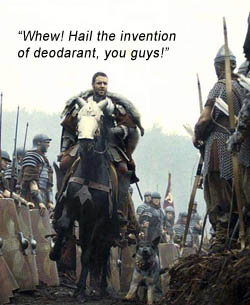 His helmet disguising his identity, Maximus rallies “his” gladiators to defeat the lethal Imperial chariot-riders in the arena, to the surprise of Commodus, who wishes to meet the upstart who would not even salute the throne, let alone die conveniently for the public’s pleasure. Maximus reveals himself to Commodus, who is driven to remarkable heights of feyness.

Discovering Maximus is alive makes not only Commodus weak in the knees – so too his sister, Lucilla (Connie Nielsen), who pined for him back when her father the Emperor owned Maximus’s taut butt. Her betrayal of Commodus sets in motion the third act, steeped in politics of reclaiming Rome as a republic, and therefore losing some of its heavy metal verve.

Beautifully filmed, in ochre tones (by director Ridley Scott and cinematographer John Mathieson), Hans Zimmer‘s score providing the perfect burnt umber flavoring, GLADIATOR nabbed Russell Crowe a Best Actor Oscar – even though Joaquin Phoenix did all the actual acting! Crowe pulls the Bruce Willis for most of the film, while Phoenix’s sway-tilt emotions are a disturbing rainbow of subtlety. (Yes, we all know the technical distinctions between Lead Actor and Supporting Actor, defined by that banal, backslapping insular coterie of hedonists and elitists – I think they’re called The Academy of Motion Picture Pooftas – but Phoenix’s screentime matches that of Crowe’s, his input is as important, and his fate intertwines with that of the hero’s to forge the film structure. How about a little love for the guy who worked twice as hard as Bruce Willis redux?)

From his bitter asphyxiation of his father, while lamenting he did not possess any of the Four True Virtues his father sought in a leader, to the scene where his arm draped across his nephew (Spencer Treat Clark) goes from one of familial protection to that of fatal threat without moving it one iota, simply by switching his demeanor from that of storyteller to tragic lament of his sister’s betrayal, Phoenix’s performance is absolutely stunning – that of a weak man, filled with disillusionment, contempt, envy, indecision; conflicting emotions constantly dancing across his face, flickers of smiles when we know he wants to cry humiliation, edging tears when we know he would rather lash out like the simple animal he is. It is Acting of a caliber few writers or directors could even describe, let alone trust an actor to convey.

“What we do in life echoes in eternity.” 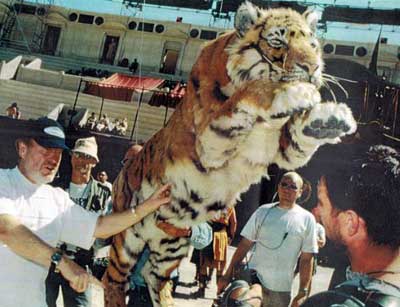 Well, maybe. Depending on what eternity you’re talking about. For all its awe-inspiring action and chest-beating man-sweat, GLADIATOR has its faults: writers David Franzoni, John Logan and William Nicholson can’t figure what ancient civilization they’re writing for. These are ROMANS, boys. So when Maximus pep talks his men at the film’s opening battle “…if you find yourself alone, riding in green fields with the sun on your face, do not be troubled, for you are in Elysium – and you are already dead!,” his troops should have replied, “Excuse sir, but isn’t that where GREEKS go?”

Granted, Romans were a confused culture, due to melding their mythologies with Greeks, but there is no excuse for Maximus to end up in a CHRISTIAN afterlife. Romans and Greeks believed in an Underworld (overlorded by Hades/Pluto/Dis Pater, etc.) where everyone ended up, not just the evil. It was a dark, unforgiving journey, not – as christian mythology preaches – a fantasy existence where you “live out” eternity as you had dreamed of living your Earthly life. If, as the writers tell us, Maximus believed in Elysium, why didn’t he end up there? Another jab at the “unreal” Roman/Greek religions and another home run for the Christ-crucifier’s team.

Greek and Roman mythology is not as plastic as christian mythology, which is still morphing with every new Jesus movie or senile pope that amends christian tenets to appeal to their ever-dwindling flocks. It is a simple task to stick to the established myths tabulated in Virgil, Ovid, Homer, Aeschylus et al.

So when Maximus commands, “At my signal, unleash hell,” it makes for a great schoolyard quote – but the Imperial Romans had no word for hell! His men should have replied, “Unleash what? Hel, the Norse goddess? Or Helle, the chick who fell into and hence named the Hellespont? Or Helios, the Greek sungod? Or maybe the Hellas?” – which was another name for – the Greeks! But I think unleashing those man-sized flaming arrows did more damage than any contradictory christian concept.

In his prayers, Maximus appeals to a “Blessed Father” – Jupiter? Janus? GLADIATOR pulls no punches when depicting the slaughter of countless of god’s creations, yet is too gutless to depict polytheism. Especially in the Lead Actor with the Oscar push.

When Maximus prays to the effigies of his wife and son and the Numidian asks, “What do you say to them?” he answers, “To my son – I tell him I will see him again soon. To keep his heels down while riding his horse. To my wife… that is not your business.” Big bonding laugh. Let me get this straight: he’s joking about sticking it to his raped and crucified wife in the afterlife? Is that not inappropriate? Are you not entertained?

“It vexes me. I’m terribly vexed.”

Maximus is not considered a pervert for his sick comment, yet Commodus is portrayed as one for wanting to bed his sister. Many Old World civilizations based their genealogies on interfamilial relationships – incest. Children were raised to believe that was the only way to retain their “pure royal blood.” It was actually taboo to mix spit with strangers or lower castes. But not all siblings were of the same mother, so it wasn’t as disgusting as you might think. And it is uncertain when these practices ceased. Many history books shy away from the subject. Either way, Commodus was Emperor – and the Emperor always got his way, wrong, right, or off the deep end. He specifically states to his sister, “You will provide me with an heir of pure blood,” meaning that her current son from another husband is not “pure” enough – only a union between brother and sister would produce a pureblood heir. The filmmakers play this like a perverted, incestuous rape threat yet this actually was the way of the ancient world. 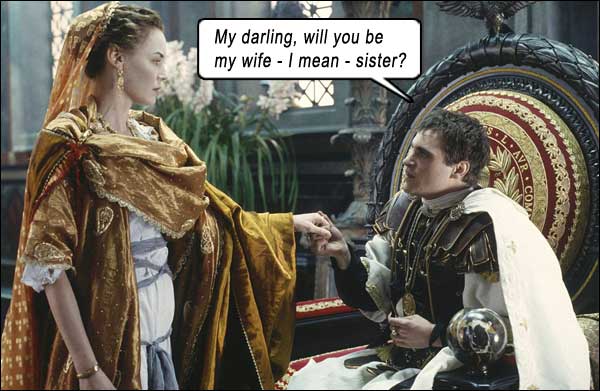 Yet there is Cardboard Connie, playing Lucilla with a sexual recalcitrance reflecting three thousand years of retrospect and current social taboo, rather than acting like a woman of that period. Her helmet on MISSION TO MARS should’ve been this airtight…

Commodus all in white, Maximus stumbling from a stab wound and seeing his predestination christian homecoming, Lucilla giving a eulogy that makes our flesh crawl, the Numidian (who had his own religious beliefs) succumbing to the christian myths (after all, they are the right ones, of course! Not like those other stupid religions, which christians are still trying to wipe off the face of the Earth) and sotto voce, “We will see each other again – but not yet!”…

Hail Caesar and all that. Romani Ite Domum.