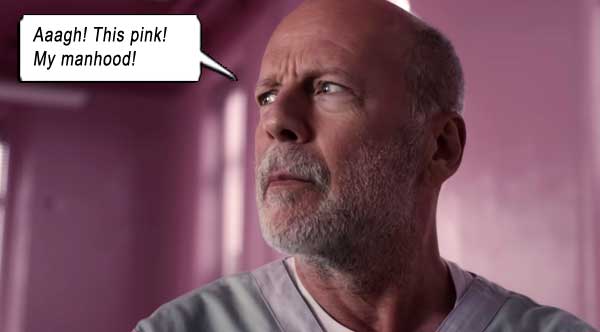 It’s like – broken glass;
You get cut before you see it,
So open up your eyes!…
— Ronnie James Dio, “Stand Up And Shout”

Things don’t always turn out the way you want them to, chillun! Not even for superheroes…

The three protagonists from two previous M. Night Shyamalan thrillers gravitate toward one another like atoms reaching critical mass in GLASS, the intellectual, explosive climax to a trilogy we didn’t even see coming until the last minute of the second film! Reprising their roles from UNBREAKABLE (2000) and SPLIT (2017) are David Dunn (Bruce Willis), Elijah Price (Samuel L. Jackson) and Kevin Wendell Crumb (James McAvoy).

The “secret trilogy” itself is Night’s grandest sleight-of-hand since that world-breaking twist in THE SIXTH SENSE – recall the final frames of SPLIT, and the thrill of hearing the familiar James Newton Howard score crescendoing, as the camera panned down a row of diners and came to rest on a grizzled Bruce Willis!

We are re-introduced to the unbreakable David Dunn, now running a security company and surreptitiously stalking the streets looking for trouble to quell; we are overcome by the split personalities of Kevin (including “Patricia,” “Hedwig” and “The Beast,” performed in stunning real time by McAvoy); and we later meet brittle-boned Elijah, captive in a psyche ward under heavy sedation.

Director-writer Night throws us red meat in the first act, as he pits David against Kevin’s Beast in a super-man battle – HOOWWL! – it’s what our child-animal spirits were craving since the end of SPLIT! Recall that the Beast believes “the broken are the more evolved!” and spared his scarred victim as a kindred spirit. So we see the fury and confusion on his face when he comes up against this man who is – UN-breakable.

This super man-battle is cut short when they are captured, and imprisoned in the same psyche facility as Elijah, each of their cells specifically designed to nullify their “powers.” Here they meet Dr. Ellie Staple (Sarah Paulson), who attempts to disabuse all three of the notion they are super-human, by using logic, scientific theory and behaving like Nurse Ratched.

Dr. Staple brandishes the term “superhero” like a dirty word, and it’s remarkable to hear that term said out loud in a film based in the real world. She insists they have no “powers” but simply use their perception, environment and circumstances to their fullest potential to enact what seem like superhuman deeds. Social media begs to differ, David’s vigilante deeds being attributed to “The Overseer” “The Creeper” or “The Tiptoe Man” (David: “Let’s not mention the Tiptoe Man ever again!”), while news programs sensationalize Kevin’s multi-personality misdeeds under the moniker “The Horde.”

Balancing the three supers are their human counterparts, all the same actors reprising their roles from their previous films: Spencer Treat Clark is Joseph, David’s son (and it’s a joy to see him now 17 years later (!), as a young man aiding David’s vigilantism by seeking out crime via the ubiquitous camera system littering modern cities; Charlayne Woodward is Elijah’s mother (she is actually five years younger than Sam Jackson!), and Anya Taylor-Joy is Casey, once captive of the Beast, now the only person who can bring Kevin “into the light” from the broiling darkness of The Horde (I think it has something to do with her massive… eyes). 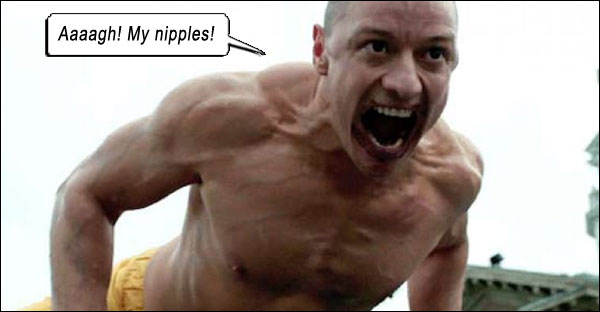 If it weren’t for the overarching story being so compelling and the other two characters being such magnetic personalities, this movie, like SPLIT, would once again belong to the kaleidoscopic James McAvoy, playing The Horde with such verve and combustibility, you will literally catch your breath at his effortless sliding in and out of personalities, each with not just a different accent, but their own mannerisms and stature! (Funny Little Point: The Horde consists of 24 personalities, and in a hilarious detail that might be missed in an eyeblink, in Kevin’s cell, he’s got 24 toothbrushes in cups around the sink!)

Over the course of days, the three resist Dr. Staple’s gaslighting, until Elijah proves himself the mastermind he considers himself to be, calling himself “Mr. Glass” (as of  a grandiose supervillain on par with Lex Luthor), and effecting a dandy escape that utilizes the power of Kevin’s Beast in the most inspiring manner. (Why “dandy”? Well, he’s wearing Prince’s overcoat from PURPLE RAIN.) And the Beast allies with Elijah because there is no one more broken, and thus no one more evolved, than Mr. Glass!

The movie compleat shatters the expectations of comics fans who have grown accustomed/conditioned/inured to the idiocies of the Marvel Universe. The stark difference between Night’s three “superhero movies” and their overblown, overbudgeted counterparts (that are basically children’s fare – AVENGERS movies in particular) is their lack of magic. No armor appears out of nowhere; no masks appear and disappear, no one walks through walls or shoots laser beams from their eyes. Ironically, Dr. Staple’s rationalizations are exactly how Night purveys the powers of his protagonists, grounding his superhuman anomalies in pragmatic physics and psychosomatic science.

Also – no CGI Bombast Climax, where everyone and everything turns into a special effect with Pretty Orange Explosions and eye-strain and magic who cares fuck you.

Night does, in fact, tease a CGI Bombast Climax, as Glass plans his big exposé of the superhumans at City Tower, a sparkling ziggurat aching for the sky in the midst of Philadelphia – and surely Avengers magic fans were drooling over this potentiality – but no! – expectations shattered as the grand finale takes place on the front lawn of the hospital, with the tower in the misty background! So rather than gaze blandly over a CGI blamfest, we find inspiration in the slightest real-world feats – shot of David running from behind, mackintosh fanning out behind him like a cape; The Beast tipping over a police car, viewed from within the car…

Glass, in some twisted way, is correct when he claims he is “creator” of both the hero (David) and villain (Beast), through tampering with fate. (We learn Kevin’s father was on the same train David was on at the beginning of UNBREAKABLE. David was the only survivor, spurring the discovery of his power, whilst Kevin’s father died, adversely affecting Kevin’s psyche towards crime.) And now Glass claims he is mastermind of their fate, as he foretells: “This is an origin story!” Our heads snap up. For this is not a movie on how these heroes got their powers – we already know that – it is actually a meta-commentary on this grim universe Night has created with this trilogy.

Night has likened the ending of GLASS to ONE FLEW OVER THE CUCKOO’S NEST – where the hero was defeated, but his mission lived on. Although, to be cynical, Mr. Glass broadcasting the footage of the supers performing super-stuff as proof of their super-ness would probably be met with chants of Fake News, in this political climate that would elect a nitwit orange dick-rash to the presidency.

On a budget of just 20 million dollars, GLASS is a masterpiece, perfectly paying off all the foreshadowing from UNBREAKABLE nearly 19 years ago! For those who might have doubted Night’s storytelling prowess through his lean creative years (HAPPENING, AIRBENDER, VISIT), cast your mind back to the numerous hints at SPLIT and GLASS littering UNBREAKABLE: The comic art that Elijah is hawking in that movie’s first scenes shows a caped superhero and a bestial villain named Jaguaro pitted against each other; later, we see the original comics cover and the caped hero is in green (David’s mackintosh color) and Jaguaro is yellow (the Beast’s clothing color); David tells Elijah how he was nearly “drowned in a puddle” and “That’s not how superheroes die!” – a tragic foreshadowing of his fate in GLASS… 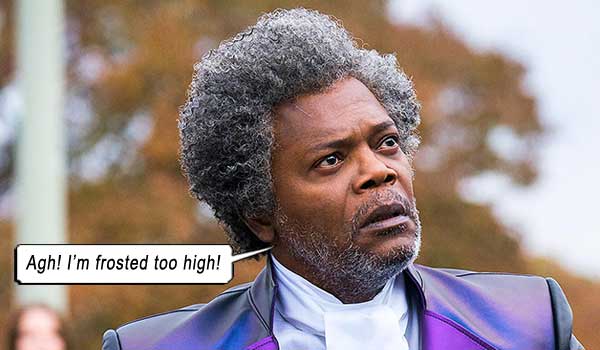 Mr. Glass’s last words resonate with layered meaning: “There are unknown forces that don’t want us to realize what we are truly capable of. I believe that if everyone sees what just a few people become when they wholly embrace their gifts, others will awaken. Whoever those people are, who don’t want us to know the truth – today they lose.”

He could be referring to the fact that he could see through Dr. Staple’s ruse from the beginning – she was deeper and darker than just a psyche warden – or he could be referring to all of our creative lives. It is the desire awoken in anyone when they see what their heroes can do, that drives them to try to awaken those powers within themselves. Deeper, darker Night.

We can only hope that Night will return to this universe he has created (fulfilling his own character’s advice), bringing superheroes to the real world, giving the Marvels and the DCs something to fear, as he peers through a glass darkly.