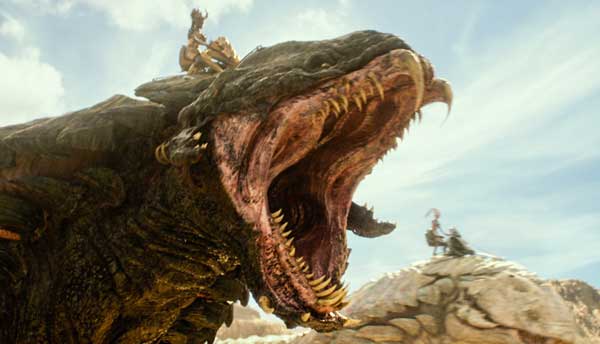 Who knew Ancient Egypt had so many special effects?

Plot Flaw Alert Which No One Seems To Notice: In the visual gluttony called GODS OF EGYPT, evil god Set defeats virtuous god Horus by plucking out the source of Horus’s power – his eyes. Now Horus must go on a quest to retrieve his eyes, so that he can regain the power to defeat Set.

But wait, you dummies!—

If Set defeated Horus even when Horus had his eyes, then what good will it do Horus to get his eyes back? He was defeated even with the source of all his power intact – so… uh, what now, geniuses?

Thus this whole shaboo-shabah, this journey across netherworlds and cosmic oceans, this slogging through swamps and deserts, this battle against mega-sphinxes and ultra-cobras, all becomes extremely pointless. And very very very silly.

Danish-born Nikolaj Coster-Waldau is Horus, cutting an imposing figure that easily might have been a role for Aaron Eckhart or Thomas Jane (and we sometimes equate him with one of those more famous actors during the action sequences).

Manly Gerard Butler is Set, all square-jawed Welsh-Egyptian-British accent and thrumming deltoids, killing lesser gods and gaining their powers through – osmosis? ectoplasmic transfusion? zika virus? All we know is: with those powers, he even defeats his all-powerful father, the god of creation, Ra (Geoffrey Rush), who drives his magic sky bus by apparently turning actual physical levers. Then he has to have a rest on his steps in the evening from all the exertion. You lost me at magic underwear.

Brenton Thwaites is Bek, a human who helps Horus regain his eyes, so that Horus will in return help Bek rescue his lady love (Courtney Eaton) from the jaws of Anubis, the god of deathly judgment. Exotic Elodie Yung is Hathor, the goddess of love, who serves time with Set while he’s a winner and then abandons him when the tables turn. Why are so many leading ladies portrayed in this haphazard time-serving manner? Verbose Chadwick Boseman is the god scholar Thoth, the only god who looks African in this movie set in Africa. 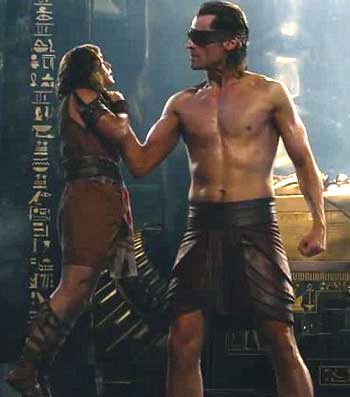 “You faithless human! So you think I only exist because Aaron Eckhart’s agent asked for too much money?”

Writers Matt Sazama and Burk Sharpless, and visionary director Alex Proyas try to imbue GODS OF EGYPT with a new slant: that of the ancient gods actually existing alongside men, ruling over Egypt like any imperial class. The 8-foot tall gods physically tower over their human subjects (who are screen-captured here in the same manner as the Hobbits in LORD OF THE RINGS – as smaller people alongside giants). The wars and skirmishes are basically between the gods over the manner of ruling the humans. It’s a workable concept, and ye gods I love the ancient Greek, Roman and Egyptian mythologies (despite some of the contradictions and arbitrary magic), but the filmmakers get caught up in gratuitous overkill when it comes to their efx sandbox.

The gods arbitrarily turn from human form to CGI versions of themselves; in their full CG eye-strain, they resemble their hieroglyphs, therefore Horus is a silver falcon with steel-belted wings and Anubis is a jackal-headed humanoid, etc. Set is many-gods-in-one, so he can turn into any old party favor he wants, just like it says in the Bible. One wonders why they even bother battling in their human forms if their god versions are so much more powerful and sexy. The backgrounds are ALL fake-looking, with many scenes nothing but computer graphic imagery, including all the foreground and characters. Some of the full-CGI characters like the minotaurs look jerky, with mismatched voices; there are giant snakes that blow fire, a Sphinx whose booming voice we cannot understand, and a soundtrack that oddly keeps reminding us of the main theme of Stranger In Paradise.

Here’s something else that doesn’t make sense in a world where gods and magic exist: Set usurps the throne of benevolent god king Osiris (Bryan Brown, complete with Australian-Egyptian accent), in order to enslave Egypt’s humans… to force them to build a tower for him; a tower he could just as easily have built, uh, with his magic and his own gigantic minotaur-minions. Ancient kings (and ancient Americans) enslaved people to perform tasks that were too cost-prohibitive with an employed labor force. But Set doesn’t need money. He’s magic. So why does he need slaves? If he wants to “rule over Egypt,” just kill Osiris, change the name-plates on the Ionic columns and rule over a land fertile and productive with an obviously flourishing economy. Why turn it into ochre filth and things burning on the horizon? Is this any way to run a big-dick-ocracy?

In the end, Horus discovers his “humanity” and realizes he doesn’t need his other eye to be more powerful than Set (because the focus groups say he looks more ruggedly sexy with that eye-patch), proving that gods can learn life lessons too, which means everything that just happened in the movie is even more unnecessary and pointless than it already was.

Ironically, GODS OF EGYPT will appeal to those who will never have the propensity to educate themselves on the mythical gods of ancient Egypt.