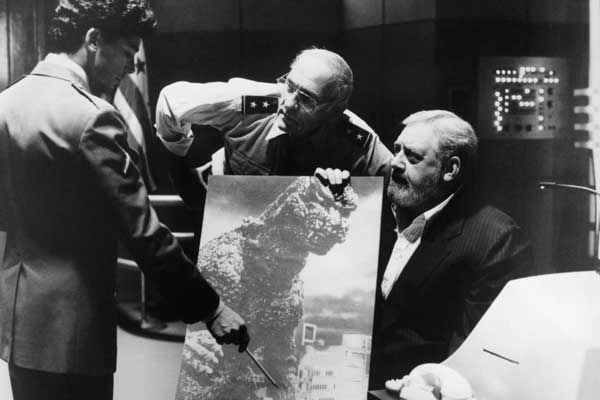 Uncanny special effects to make it look like Raymond Burr is in the same film as Godzilla!

Zilla versus Tokyo in a battle to the Burr.

GODZILLA 1985 (released Aug 1985) is the American edit of the Japanese film THE RETURN OF GODZILLA (released in December 1984).

First title card: Starring Raymond Burr. (Sigh… God, I hate American re-edits!) GODZILLA 1985 actually stars Ken Tanaka in the lead role, as the action man who bests Godzilla and gets the girlzilla. Raymond Burr is relegated to being even more in the background than he was in the American edit of GODZILLA 1954. Whereas that re-edited film (GODZILLA: KING OF THE MONSTERS) recreated scenes from GODZILLA and tried to integrate him into the action, in this movie, though reprising his reporter role of Steve Martin (wait! – Steve Martin?!) he is completely separated from the Japanese throughline, while wallowing his bulk around an American war room like a hippo with somewhere better to be.

The opening of the movie is the same as the Japanese version – a boat destroyed, a roar, a young reporter (Tanaka) discovering the dead boat, being attacked by a sea louse puppet… Then we cut to old Raymond Burr. 30 years after the original Godzilla re-edit, this guy is still ruining Godzilla movies!

Professor Hayashida (Yôsuke Natsuki) identifies the threat as Godzilla, and when the monster sinks a Russian nuclear sub, his presence is made known to the world. Countries shiver. Stock markets crash. Marketers cheer. Raymond Burr wallows.

Differing political leanings: In the Japanese version, initially the Americans are blamed for the sinking before Godzilla is revealed, but here, it’s ALL Godzilla’s fault. Also, in the original, they mention Hiroshima in passing; this version adopts the “Who, us?” stance and edits that word out. Can’t have Americans looking foolish. We’ll save that for the actors in the war room. Same drawling dunces that were used in the Japanese version.

To its credit, this movie is cut a little tighter than THE RETURN OF GODZILLA, with an argument between the three countries’ leaders over using nukes getting straight to the point of Japan vetoing their use (which saved the American bad actor at the meeting, by giving him less screentime to enunciate like a bad actor). 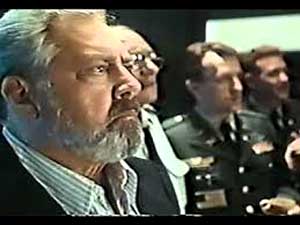 Unfortunately, the tighter cutting was not to make this a better movie – it was to create time to insert the American Big Dick Pentagon segments that do not exist in the original. Footage showcasing a host of American C-actors, with B-actor Warren Kemmerling as the General, and Raymond Burr (who identifies himself as just “Martin,” because – seriously, Steve Martin?), called in as a consultant that provides zero aid in identifying how to stop a monster that is raging through a city 6,772 miles away.

The looping is so half-assed in these new scenes, the Americans speaking English look like they’re speaking Japanese and being dubbed with English. Martin says ominous things as if he’s Richard Crenna in FIRST BLOOD, “You may have to rethink your strategies, General…” All that’s missing is the lightning. Oh, and any link to the actual plot.

30 minutes in, we meet Godzilla for the first time, with the pan up his body as he stomps to a nuclear reactor.

There are interesting concepts regarding dinosaurs and birds being genetically similar, which explains how Godzilla might have the same migration instincts as birds; allowing the scientists to create a homing beacon that will draw him to the mouth of a volcano, where a controlled eruption will drop him in.

Japan’s Super X plane is used (I know, right?), which succeeds in knocking out Godzilla. Then the Russians fire a nuke “accidentally” at Godzilla (even in the original, this plot point is kindergarten screenwriting), and the Americans have to counterstrike. This movie shows us all the drama we missed in the original version, of the Americans sweating in the war room as their missile nears the Russian badboy. And with every jackass in the scene “indicating” tension via their closeups, we realize we never really missed anything.

The radiation of the nukes exploding in midair wakes Godz! Ha! Irony. Then toy planes attack. No effect. Martin sternly delivers his meager lines from seemingly another movie, “Don’t provide military support for Japan – it’ll only antagonize him. He’s looking for something – searching – if only we can figure out what it is before it’s too late.” What are you talking about? They’ve already figured it out in Japan. Were you guys not listening when they spoke of the beacon and the volcano gag?

So everything is planned and executed without the help of Steve Martin, The Jerk. And whenever someone makes a reference to the 1954 movie, he has to put his 2c in, for his veteran status of standing around in that film like a wet dog fart. “Just for the record, 30 years ago – they never found any corpse!” Oh, shut up! We clearly saw Godzilla turn into a skeleton. Still wet-dog-farting it.

Do we really need this Burr fella here, filmmakers? Why is the same methodology being used from 1954, casting an American star to “can-open” the U.S. market? One would think that American audiences in the mid-80s would be sophisticated enough to watch a wholly Japanese movie about a well-known Japanese property. Godzilla was a household name by 1985. And Raymond Burr was NOT. Also, comedian Steve Martin was on top of the world in 1985 (with THE JERK, THE MAN WITH TWO BRAINS, THE LONELY GUY, and other classic comedies to his credit), so the character Steve Martin in GODZILLA is now only spurring sideways jokes about THE Steve Martin. What the filmmakers hoped for in name recognition was a complete backfire.

Filmmakers emulate the end framing of the original, with the military standing in a bowling pin configuration, watching Godzilla tumble to his volcano prison. While Raymond Burr stands sternly at the head of the American contingent, tall, proud, big-dicked, in some other dimension that is using different filmstock, tragically looking on while other people do all the work – same as 1954.

THE RETURN OF GODZILLA was a mediocre movie; GODZILLA 1985 inserts abysmal footage that makes it even more irrelevant, diluting the plot and action, falling into a conflict with nature that is a proactive Fuck You.

Putting a capper on the inanity, Burr does an outro voiceover that is more irrelevant than Steve Martin in 2016.