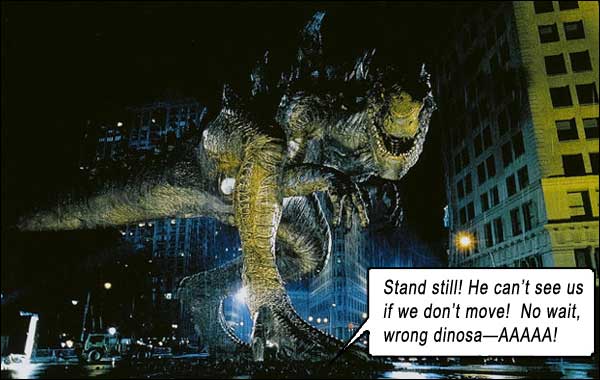 Godzilla takes a bite out of The Big Apple. And Ferris Bueller is there to stop him.

After Japan’s Toho Company killed off its greatest property in 1995’s GODZILLA VS. DESTOROYAH, TriStar Pictures sought to fill the vacuum with its own American Godzilla that would blow the Japanese version out of the water, by utilizing state-of-the-art CGI visual effects that Spielberg just proved to be groundbreaking in 1993’s JURASSIC PARK.

Negotiations and cocaine ensued. And thus – with Toho Company’s blessing – TriStar revived the pseudo-dinosaurid as an American. Gone was the lumbering, thunder-thighed dog-poo-headpiece, guy-in-rubber-suit; GODZILLA 1998 is reimagined as a sleek, computer-generated, tyrannosaurid juggernaut (designed by artist Patrick Tatopoulos), that – in the words of the filmmakers – “could run fast.”

After many writers and directors fell by the wayside, screenwriter Dean Devlin and director Roland Emmerich (the men behind 1994’s STARGATE and 1996’s INDEPENDENCE DAY) would be entrusted to deliver this Eastern property unto the Western world. They succeeded. And failed… 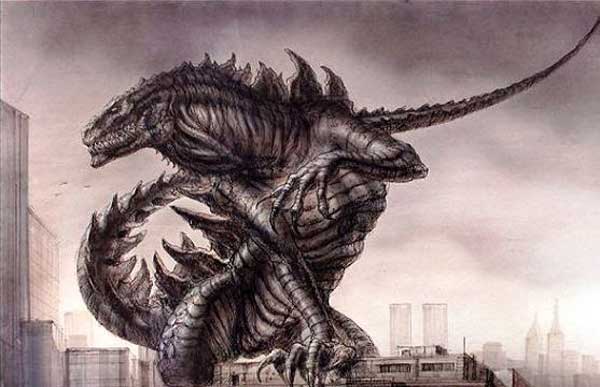 GODZILLA 1998 opens by blaming the French. How American. We see iguanas in the foreground as atom bombs explode in the background. (Implying quite conspicuously that the radiation from these bombs created the monster we would see later. So was Godzilla a mutated iguana? Do these filmmakers know how mutation works?) Later we would learn the bombs were French. Because the filmmakers didn’t want to blame any country that could actually retaliate against the U.S.

Thus, whereas the 1954 GODZILLA was a Japanese parable about the repercussions of American murder and hubris, this movie turns that plot device of radiation-mutation into a comedic French faux-pas against the environment. American gaslighting at its finest.

The reveal of Big G is held off for a long time, as the movie emulates all the best parts of its predecessors: a mysterious leviathan attacking a ship, a survivor fearfully repeating, “Gojira… Gojira… Gojira…”; three trawlers being dragged under the waves, giant claw marks in the side of a beached tanker, standing in a footprint the size of a lounge room… these scenes create an anticipation that will pay off in stegosaurian spades when the beast rises out of New York Harbor in a tempest of rain-soaked fury.

A taloned foot descends, the largest we have ever seen on any Godzilla! Stepping onto cars and through skyscrapers, impact tremors foreshadowing his mountainous appearance; spiked back, therapod thighs, lantern jaw; the most photo-realistic Godzilla ever committed to the screen and, at the time, the largest ever Godzilla. 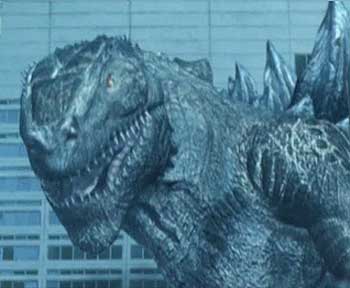 Toho Company’s co-opted low-res version of 1998’s Godzilla, re-cast as Zilla. The overall low quality of TriStar’s movie gave Toho license to mock the stellar effects, which was shitting on the wrong doorstep.

By 2004, this 1998 Godzilla was renamed “Zilla” (only half-contemptuously) by Toho Company, and was down-sized, so that his precursor, the Heisei Godzilla from DESTOROYAH, and his 2014 successor, the Legendary Pictures Godzilla, were bigger than him. But we got eyes.

Also, Toho snidely ousted this Godzilla from canon, by featuring him in other Godzilla media as “Zilla” as if he is a totally different creature from the more familiar Godzilla design. In FINAL WARS, they even make Godzilla dispatch Zilla with a flick of his tail. In other words, Toho reclaimed the 1998 Godzilla design, then dumbed it down to its puerile level of efx, then mocked it. How did they get away with this?? Like Milli Vanilli before him, fans came to consider Zilla a glossy façade, unworthy to be on the same stage as the real Godzilla.

Well, I personally hate what they’ve done to Devlin and Emmerich’s creation. No matter its faults, it was no worse than many of the Showa or Heisei series that shat on the Godzilla mythos in a much more insincere manner than TriStar’s sincere attempt at rejuvenation of the property.

Along came a Broderick. He’s the Hero. No, really. Matthew Broderick is the hero in a Godzilla film. After casting Michael Keaton as BATMAN, I guess Hollywood thought it could get away with anything… Blessed like Michael J. Fox and Paul McCartney, with an eternally-youthful face that makes it impossible to shake his Bueller-ness, Broderick is biologist Dr. Niko Tatopoulos (yes, in honor of the artist), recruited by the military (led by Kevin Dunn as Colonel Complainer), because they know that every Godzilla movie needs its Four Pillars – The Scientist, The Soldier, The Politician, and The Annoying Kid.

The Politician is Mayor Ebert, with an assistant named Gene. (Michael Lerner’s and Lorry Goldman’s characters are named as a dig to the immortal movie reviewers Gene Siskel and Roger Ebert, who never saw a Dean Devlin and Roland Emmerich movie they didn’t pan.) 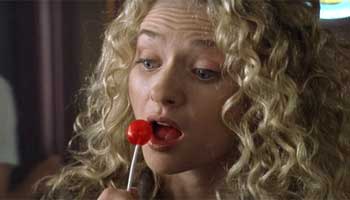 Maria Pitillo putting her mouth to its evolutionary use.

And the Annoying Kid is cherubic Maria Pitillo as blond ambition reporter Audrey. Well, she’s an adult, the ex-flame of Niko, but so frizzy-haired cute and doe-eyed spinner, she might as well be 12. Vindicates her annoying-ness by stealing a Top Secret tape from Niko (to advance her career), then tries to redeem herself in a morbid tone-shift; such a heavy betrayal really hung this character out to dry, and there was no way she could seek forgiveness no matter what she tried, naked or otherwise.

The magnificent Jean Reno is French Secret Service agent Roache, playing off his rep as a Cleaner (LEON, 1992), following the beast to fix the atomic mess made by his government (and making dumb American coffee jokes)… his talent and ominous presence wasted on this film.

Harry Shearer is way too Weinstein as News Anchor Guy, who tries to Weinstein the babyface girl into sex-for-advancement. (Once only a noun, now an adjective and a verb as well!)

Hank Azaria is a New Yawk cameraman, running around with VHS video tapes, proving his excellent utility as a character actor, yet with an accent so inconsistent, we can’t tell which side of the country he’s mocking. There’s that iconic scene, where Godzilla almost steps on him, his screaming body disappearing from view between gargantuan claws. Luckily he didn’t speak, or Godzilla might’ve aimed more carefully.

To its credit, the movie makes a reference to the beast’s original name – Gojira – and has a character chide another for being so pedestrian in not being able to hear and pronounce that name correctly.

It is discovered Godzilla has made landfall to lay eggs. Hundreds are discovered in Madison Square Garden, and they hatch baby zillas (9-foot long creatures that look like Velociraptors, using the same JURASSIC dino-technology) that chase our heroes around the Garden, until the Garden is razed by jet missiles. As soon as the zillas begin to hatch, the movie falls down bleating in death throes, as we realize the pointlessness of hundreds of these things – ‘more’ is not ‘better,’ Roland! There could have been three or four to cause the same level of havoc, with less rendering time. This pointless sequence merely killed time until Big G returned to chase the humans once more.

Of course, by movie’s end Niko is giving orders to Colonel, and Colonel is carrying out those orders, because – as we learned from all those Japanese productions – you can do that in times of Godzilla.

As Godzilla struggles in the Brooklyn Bridge’s cables, there is one moment of sadness, as missiles hit the beast’s side, and we realize this animal didn’t kill anyone or destroy any building with malice, but was just looking to lay eggs. Niko looks on, as the beast seems to notice him in its last breaths. It would be tragic, if only Dean and Roland had not opted to make the beast so neutral… They specifically said they wanted to drive home the point Godzilla was not hero or villain, just an animal doing its thing. Okay, no connection. Kill it then.

Emmerich succeeds with his GODZILLA in dollars:

On a budget of $150 million, it made $379 million; the third-highest-grossing film worldwide for 1998. It was not a bomb financially at all – it just did not meet “projected expectations,” so was considered a bomb by the avaricious studio golems who wanted to retain their yacht lifestyles. And I think that disappointment filtered down to the populace, who obviously went to see it in droves, for its magnificent effects (which were another success!), if not enjoy it as a mindless piece of action fluff.

Emmerich fails with his GODZILLA in myriad ways:

Zilla Manilli would get no return bout, no second chapter, even though the studio almost started pre-production on GODZILLA 2 and had signed all the principals to three films.

After Big G’s demise, for which we felt nothing but ambivalence, camera closes in on one last ominous egg hatching in Madison Square Garden, for a sequel that would never come.

Girl, you know it’s true. Blame it on the rain.

ORIGINAL TRAILER (Scene not in movie – exclusive to trailer)
Get a load of that cockamamie T-rex skeleton!
“Blame It On The Rain” ♦ Milli Vanilli
A study in unnecessary modulations. Just like TriStar’s GODZILLA!