Lotta talk on GODZILLA 2000 being Toho Company’s rejoinder to Tri-Star Pictures’ GODZILLA 1998 (directed by Roland Emmerich), the red-headed step-child of Godzilla canon. (Maybe Godzilla would have been revived anyway, as there was a five-year hiatus since his demise in DESTOROYAH.) Insofar as comparing this 2000 version to 1998, the storyline is about the same level of dumbass, with 2000 cheating a little by borrowing story elements from the original 1954 GODZILLA. Acting – about the same level, with 2000′s Japanese actors doing as insincere a job as 1998′s American actors. And special effects – well then, 1998 (which won a Saturn Award for Best Special Effects) blows 2000 outa the water like a H-bomb test perfectly executed.

So I don’t quite get this “reacquisition” of Godzilla by Japan and Toho Company. I mean, do you want Godzilla to look like a rubber suit instead of a photorealistic faux-dinosaur? Why not fly your guys over to America to partake of their effects houses and produce a Godzilla with the heart of yesterday and the effects of tomorrow?

Nope. Too logical. And logic has never been a strong point with every Godzilla movie post-1954.

So a guy-in-a-rubber-suit rises from the deep once more, in this first film of the Millennium series, and 26th Godzilla film overall. (Let me take a moment to clarify MY numbering of the Godzilla films and the official numbering. Toho’s original 1954 GODZILLA and their 1984 RETURN OF GODZILLA reboot were basically re-edited into wholly different movies for their American releases. It’s taken for granted these American releases are the “same” films as their Japanese originals. NO! They were not just English dubs with minor cuts for runtime; they were butchered with American jingoism and conceptually altered to become – in my educated opinion – completely different films, so I count those films as two more Godzilla canon films, AND I count America’s GODZILLA 1998 as a “Godzilla film” (isn’t it?!), making GODZILLA 2000 the 26th Godzilla film… but only the 23rd Toho canon film if you wanna be prissy about it.)

A scientist (Takehiro Murata, the Japanese Hank Azaria) wants to study this Godzilla, and the military guy (Hiroshi Abe, the Japanese Cary Grant) wants to kill it. Much like the dynamic in the original. There’s an irony in this movie borrowing elements from the original and claiming that none of the other movies in between itself and the original exist: merely two years later, GODZILLA AGAINST MECHAGODZILLA (2002) would claim the same thing, ignoring this movie!

There really is no way to “reboot” a franchise with so much history and legacy in its very fabric. GODZILLA 1954 is more a conceptual parable than a B-movie. To recapture the essence of what made that movie such a landmark, you’d have to recreate the paranoia of nuclear war, the reality of nuclear fallout disabling lives around you, your society under the Damoclean sword of nuclear abuse from other nations intent on an arms race for the sake of the race itself, not for safety or even capitalism. And you’d have to get a guy in a stinking hot rubber suit to go bananas on your toys…

We’ve got the Scientist, the Soldier, we’ll soon meet the Politician, and The Annoying Kid is introduced immediately, spouting jargon, as the daughter of the Scientist who runs the Godzilla Prediction Network.

A billion year old rock rises from the sea and turns into a spaceship that tries to terraform Earth – and Godzilla is there to stop it. For no reason as usual. But the new Godzilla suit design is looking mighty ferocious, and sits better in its environment. Some of the process shots and chroma-key are quite bearable (bringing the franchise up to being only forty years behind the rest of the world in special effects).

Note that the spaceship also “borrows” from Emmerich’s INDEPENDENCE DAY  by shadowing the populace and landing on top of a skyscraper. (“Borrows” or “flips the bird”?)

Whenever the military appears in a Godzilla movie, my eyes glaze over. First, they tie down the spaceship with “unbreakable electromagnetic cables” but when it wants to fly off… it just does. Then a soldier boasts about “armor-piercing missiles” that will go through Godzilla “like crap through a goose!” Great, they’ve started using that old simile (from PATTON, 1970), which means they’re now only thirty years behind in filmmaking. Of course, the vaunted armor-piercers don’t go through anything – geese, Godzilla or crap. Helicopters turn up, fire. Nothing. Tanks fire. Nothing. That’s okay, keep firing. Maybe we’ll hit him while he’s not looking. Lemme ask: after the first twenty taxpayer-funded armor-piercers don’t work, why are you douchebags still firing? Talk to the glaze…

The scientist steps down into Godzilla’s giant footprint (homage to 1954) and retrieves cells that show Godzilla regenerates immediately (like Wolverine), and that if they could isolate that gene it would benefit humanity. Blah blah. A plot point that is only pertinent to one moment in the fight against the spaceship monster, when it tries to clone itself from Godzilla, and fails. 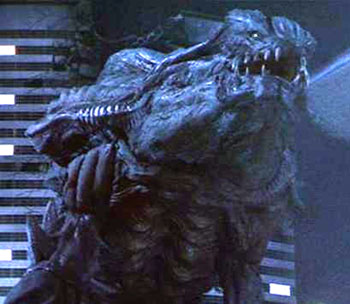 There is a CGI interlude before the spaceship turns into a guy-in-a-suit, which takes us right out of the movie and drops us on our heads. The graphic looks like the “wire-frame” diagrams used for special effects tests, or like the best effects the SyFy Channel has to offer. Then it sprouts tentacles, then after an interminable sequence that was like watching evolutionary paint dry, a monster coalesces called Orga apparently. It’s a vicious creature design, that is a cross between CLOVERFIELD, GODZILLA 1998 and a lobster muppet.

As Godzilla waddles off, triumphant yet again (in achieving what, I don’t know), someone chimes, “Why does he keep protecting us?” Waitaminute!… Only in the crapfest post-1960 canon did Godzilla turn into “mankind’s protector” – if you’re saying none of that exists, then the only other time you’ve met Godzilla was back in 1954 when he went through Tokyo like crap through a goose. This line doesn’t make any sense!

And Scientist’s reply makes even less sense: “Maybe because… Godzilla is inside each and every one of us!” —

There isn’t enough soap in the world to wash off how dirty I feel right now.

But wait! Maybe it’s not as cheeseball as it sounds. He’s talking about DNA, and didn’t Carl Sagan tell us that in the Earth’s forever-regenerating ecosystem, everything circulates on an atomic level? There’s nowhere else for cells to go except back into Earth’s ecosystem. Therefore, we are all made of the same elements; we are all starstuff… Ah, who am I kidding? The filmmakers weren’t paying tribute to Sagan, they were plagiarizing a platitude they’d heard in dumb American movies, to bring them up to only twenty years behind Western filmmaking…