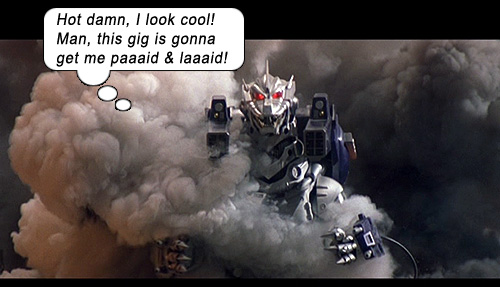 A TV reporter being battered by driving rain, describing the tempest. Behind him, the sea roils. As he says, “It’s huge and getting bigger by the minute!” his crew stare gape-mouthed at what’s behind him, rising from the deep: a gigantic creature, spiked back, blackened skin, dinosaurian in aspect.

A shopkeeper accidentally drops trash in front of his shop. He stoops to pick it up. ANGLE ON shopkeeper as he raises his head to see:

People running in foreground as we hear reports of a giant creature making landfall. Through the rain, in the background, we catch shrouded glimpses of this giant creature, slowly plodding, towering over the city.

A policeman holds back a citizen from running back to his house, as he sees it crushed by a reptilian leg the size of a mountain.

Tanks amass and fire at the creature. We see the creature in alarming silhouette against the raging storm. Its back-spikes spark up as it regurgitates atomic breath at the military, annihilating them. Lighting strikes its spikes, sparking them into dazzling luminescence! Then like a thousand banshees descending from the furious skies – it throws its head back and ROARS.

GxMG is to Godzilla legacy what BATMAN BEGINS is to the Dark Knight’s resurrection. The filmmakers didn’t just drag the beast back from the brink of Looney Tunes, they’ve actually skewed towards quality: it’s not just the high-end production values, the writing is cogent, the acting is existent, and the direction and editing is simply beautiful. Director Masaaki Tezuka really knows how to frame a scene, how to forge hero angles, how to sustain his audience visually; writer Wataru Mimura (who also wrote 1993’s GODZILLA VS. MECHAGODZILLA II) sensibly strings together a plot and delves into characters in a way forgotten by Godzilla writers. Somebody resuscitate me. Are we still on Earth as we know it? 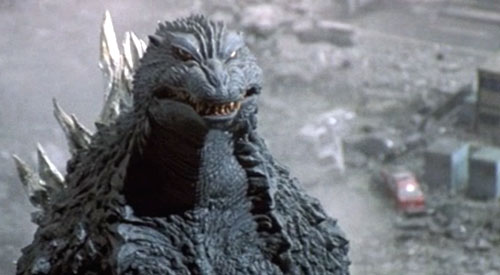 The Godzilla suit is ferocious! I believe it’s the same suit from GODZILLA 2000, feral and vicious, with a snout so pointy-pointy, eschewing the surprised puppy-dog poo that the headpiece had degenerated to in the Showa series. And his spikes flicker into luminescence whenever he blows that atomic hellfire. (Surprised that they did not continue the suit from the last film, with the crooked spine and dead white eyes, but I guess they couldn’t get the smell of the dead souls out of it!)

Now it’s still a “Godzilla Movie” which means it is shot at us from the guns of lowered expectations. Its 2002 competition was literally stratospheric: MEN IN BLACK II, SPIDER-MAN, MINORITY REPORT, THE TIME MACHINE, et al. GxMG would not be able to match the special effects prowess of its peers, but it has brought the franchise up to being merely ten steps behind Western Filmdom’s level of production, rather than lagging 50 steps behind in quicksand.

After the opening scene – reported as “another Godzilla creature, much like the one that was destroyed in 1954” – the military build a “Mechagodzilla” from the remains of the original Godzilla’s skeleton, retrieved from the depths of the ocean. Now here was something new! This movie smears canon like Heath’s Joker smears his greasepaint, wiping out every Godzilla movie that came after the original 1954 GOJIRA! Meaning, this is only the second time Godzilla has appeared! Even more interestingly, they admit to Godzilla’s death in 1954 (specifically stated), show some footage from that film, and show divers retrieving that skeleton (which looks suspiciously like a tyrannosaur for its big skull!). They intertwine the original’s DNA so that Mecha is effectively a cybernetic organism (a cyborg). 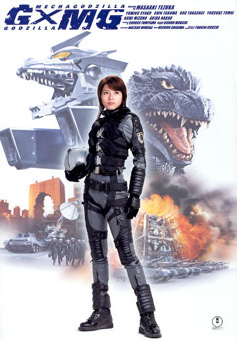 Alternate poster for the movie, actually highlighting the heroine instead of the beasts, illustrating her integral role in this film.

Congruent with this storyline, the human element is forged emphatically: Maser cannon operator Akane (Yumiko Shaku) is the soldier scapegoated for the death of her crew at the claws of Godzilla in the opening scenes. Her motivation is revenge on Godzilla for that blame; she’s a different kind of heroine: nihilistic, and – surprisingly – competent! I say surprisingly not because women cannot be competent, but because they are never shown to be in blockbuster movies.

As all Godzilla movies use the four devices of Soldier, Politician, Scientist and Annoying Kid, we check off Soldier (Akane, along with her Lieutenant, the Japanese Patrick Swayze, Kô Takasugi), Politician (a very somber Akira Nakao as prime minister), Scientist Mr. Yuhara (Shin Takuma: “Humans are ruining the Earth, destroying ecosystems – I will reverse this tide!” You go, girl!), and welcome to the Annoying Kid, his young daughter dubbed with a woman’s voice (Kana Onodera); though even the Annoying Kid is given some touching characterization when she laments, “Why bring Godzilla back to life? I wish they’d bring Mom back to life instead…”

The military, which are usually peripheral mites in Godzilla movies, are organic to the plot – they build and pilot Mechagodzilla, with Akane our heroine as its main operator, who must manually go inside its head when it loses remote power in the final scenes. The climax is dynamite; how did a Godzilla movie ever get this “cinematic”?

The effects are not half-bad; the original GODZILLA (1954) worked so well because it was a sincere story, message and filmmaking, using state-of-the-art practical effects with maximum efficiency. Toho Company just got lazy and let down their legacy property with crap budget and crapper production talent. GxMG goes the way of G-1954 – low budget, utilized well, with a polished story and experienced crew to navigate it.

Must admit, Mechagodzilla’s weaponry is super cool. (They call Mecha “Kiryu,” which means “machine dragon.”) He’s like the Iron Man War Machine. And his most potent weapon: an Absolute Zero device that turns things to ice, then shatters them. And director Tezuka’s got all the angles covered for maximum hero overdrive. The stage is set for battle – and here we go… Okay –

1) Why didn’t they go for the Absolute Zero gag at the beginning of the fight? Why bother battling Godzilla like it’s a prizefight; punching like a Rocky and throwing like a Terminator? What’s the point? Just spew that AbZero on him and get the hell outa there.
2) Even Mecha’s missiles and lasers actually seem to harm Godzilla, if not give him pause. So – why build all this shit into a “Mechagodzilla”? Why not just construct these weapons in your frickin’ ineffectual tanks?

In this first confrontation with Godzilla, the DNA in the Mecha takes over and it goes rogue, doing more damage than the actual Godzilla. Hilarious! (Calls to mind my favorite axiom: the military doesn’t solve problems – the military IS the problem.) Mecha even walks through a building, leaving a gaping hole in its center – an homage/middle finger to 1998’s BRODERICKZILLA? The movie even shows that Mecha has a finite power supply, so there’s always a ticking clock, never an interminable fight scene for the sake of pleasing 10-year-olds.

We marvel at how the real Godzilla left the military alone for months while they built Mecha. Lucky he didn’t constantly break their facility while they were trying to build, eh?

For every good point (announcing characters with title cards, like it’s an “important” movie; a stinger after the end credits that wraps the main characters’ arcs; the monster suits and model tanks purveyed with smarter cinematic techniques), nonetheless, this remains a Godzilla movie, and therefore has a dumb side. When Akane is inside the Mecha’s head, shouldn’t she be typing some commands or just flicking some switches for it to stand up, rather than straining with all her might to raise its trillion-ton body weight with her 90-lb frame? Why is she straining when she’s pulling on those levers? And instead of typing in commands, or even thought-control helmets, she chooses to SPEAK to it when she first enters, “Mechagodzilla, I know you can hear me…” What if it can’t? What kind of mystical human-to-machine mind meld is she attempting? She then starts typing commands on a keyboard right in front of her. What was that verbal preamble for then?

Mechagodzilla ultimately repels Godzilla in a final battle where he rocket-thrusts Godz out over the bay, slams into the water, with Akane screaming within, and mega-blasts Absolute Zero in an ice-castle Hiroshima. When Godz cracks free of the ice, his chest is visibly scarred, and he turns and waddles out to sea, defeated… as Mecha rises from beneath the blue to watch him go…

GODZILLA AGAINST MECHAGODZILLA is miles above all other Godzilla movies except the original, which means it actually achieves its purpose of wiping all those other turds out of our consciousness and making us believe this is only Godzilla’s second coming. And the final dramatic, cinematic shot leaves us with a feeling of having watched a powerful, exciting movie which—

Heeey! I want my money back! I don’t think you get it, Toho Company! I didn’t pay to see a good movie – I paid to see a Godzilla movie…