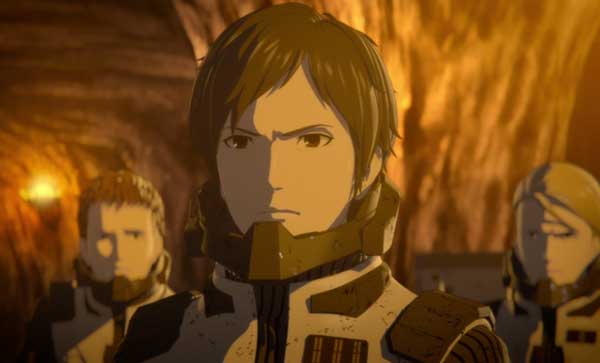 Haruo makes his decision: He will NOT become a monster.
Therefore, no more Godzilla Workout Videos.

Never in the history of Godzilla films (excepting the 1954 original) have humans had such an integral and compelling role in a Godzilla film, as they do in GODZILLA: CITY ON THE EDGE OF BATTLE. For the second time in Earth history, we’re watching a Godzilla film for the fates of the people!

CITY picks up exactly where 2017’s GODZILLA: MONSTER PLANET left off, with young, impetuous soldier Haruo (voiced by Mamoru Miyano and Chris Niosi), trapped under debris after disintegrating Godzilla, who had reigned over the Earth for 20,000 years. Only to see another titanic Godzilla rise from beneath a mountain, which stalks away, as Haruo watches helplessly and vows revenge.

The second film in Toho’s animated trilogy, CITY expands on the story of humans reclaiming Earth after being refugees in space for over 20 years – which translated to 20,000 years away when factoring time dilation. In the last film, backstory described two alien races allying with Earthlings just as Godzilla’s reign began – the religious, psychoanalytical Exif (who look like Elves from LORD OF THE RINGS), led by Metphies (Takahiro Sakurai, Lucien Dodge) and the technological warriors Bilusaludo (who look like Worf), led by Galu-Gu (Jun’ichi Suwabe, Jamieson Price). The Bilusaludo had created a Mechagodzilla to defend Earth – bitchslapped by Godzilla. 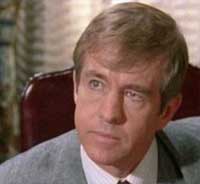 Now, Haruo and Galu-Gu (every time Haruo says Galu-Gu’s name, I think of ‘70s B-actor Clu Gulager), stranded on Earth with a chance to retreat, instead choose to locate the downed Mecha for a stab at the bigger 300-meter “Godzilla Earth,” only to discover the Mecha’s A.I. nanometal has morphed into a literal city over the millennia, still programmed to destroy anything with Godzilla’s cellular structure.

That is the meaning of the title when translated literally: THE CITY MECHANIZED FOR THE FINAL BATTLE; it’s not a city of people, it’s an actual sentient city!

Haruo and his team are tended by a race called the Houtua, telepathic descendants of humans after Earth’s decimation, who safeguard a giant Egg of Destiny (uh-oh! Mothra!), led by Twin Underage Females (uh-oh! Please don’t sing!).

While Galu-Gu reboots the Mecha City, Haruo snogs Yuko (Kana Hanazawa, Cristina Vee), stripped down to her tight t-shirt and straining C-cups, while Godzilla snoozes. Now in practically every Godzilla movie (except the 1954 original), when the monsters appear, all the human interest stories are thrown out the window, whether they be thieves or aliens or astronauts, but CITY is truly a new dynamic, as we follow the human throughlines to their astounding conclusions.

Galu’s Bilusaludo soldiers are seen assimilating into the Mecha; allowing a creeping nanometal skin to engulf them, making them more machine than the aliens they were. Haruo’s soldiers make yucky noises and run away when offered the same fate. Galu mocks the humans, “So they were inferior after all.” At this point, the aliens are just looked upon as quirky. Yet the humans are not thinking of their own enslavement to technology. Yuko even says at one point, “This is like home, surrounded by all these machines…” 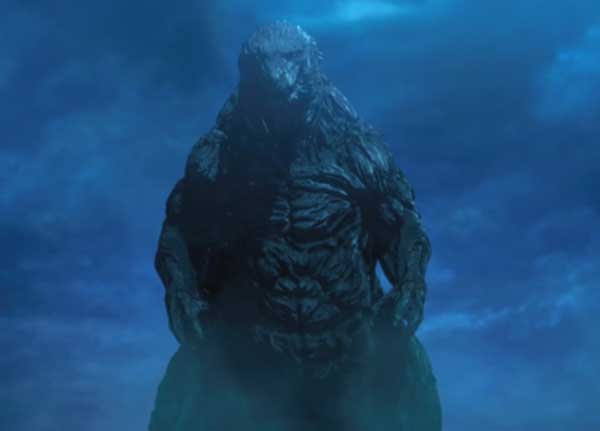 Speaking of man becoming monster, Godzilla looks more man than monster, with his Body By Jake.

Godzilla wakes, senses the Mecha and trudges soporifically toward it. (At Godzilla’s gargantuan size, 40 miles per hour looks like slow motion.) The visualization of his atomic blasts is awe-inspiring: his dorsal spines crackle with electrical charge, then a sphere of energy engulfs Godzilla for a hot second, emanating from the spines and meeting in front of his maw within a heartbeat, where a white-hot blast ramrods forward. Again and again Godzilla blasts Mechagodzilla City, until Haruo and Yuko take off in single-fighter “Vultures” to distract him while Galu readies Mecha City for a final showdown.

Let me pause to call attention to the breathtaking computer-animated cartooning! It’s old school cels meets motion-capture with a gutshock of manga; no bombastic primary colors (except for the Pretty Orange Explosions), but shocked through with a grim muted palette, the scuffed uniforms shades of dirty green, the skies gunmetal gray, Godzilla in blacks and Prussian blues. Then there is the magnificent foley, and adding to the gravitas, the epic, cinematic score of Takayuki Hattori… This visual command of the characters, making them more 24-frame lifelike than cartoony, gives directors Hiroyuki Seshita and Kôbun Shizuno, and writer Gen Urobuchi, the leverage to appeal to adults, especially with the morally ambiguous climax.

Godzilla is the ticking clock, his blasts growing more effective as he nears Mecha City, and Galu tells Haruo the only way to defeat Godz is to – assimilate with Mecha City: “If Godzilla is the name given to the environment’s ruler, we humanoids must attain the goal of becoming Godzilla. To be fused with Mechagodzilla City is the same as evolving to the next stage. Instead of being weak creatures of emotions – you become creatures of logic.”

Then the nanometal – up to this point, only absorbed by volunteers – starts overcoming Haruo and Yuko in the Vultures, against their will. The conflict is written so artfully, we almost forget Godzilla is the subject line. 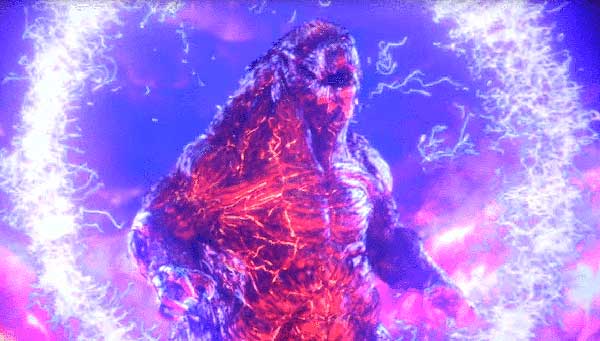 The fighting, screaming Haruo is still given a choice by Galu-Gu, who is willingly being overtaken by the nanometal: “All monsters are called monsters because they cannot be defeated by people.” The best thing about the philosophical exchange between them is that Galu never once raises his voice in anger – he is logical and dispassionate, not a hectoring villain. And he never comes off as evil, but a friend who has lost his way. (Although, if you know me, you’ll know that I support Galu 100% – augment that humanity, I say! But we all know that human writers don’t like to surrender “humanity” when it comes to screenwriting.) As the metal engulfs the horrified Haruo, Galu calmly contends, “From the moment you decided that you’d defeat Godzilla, you were aspiring to become something no longer human.” In essence saying that to defeat a monster you must become one.

Hooooly shit! This is Nietzsche gazing into the abyss! Godzilla no longer for kids – time for go to bed… And in that moment we realize: Godzilla doesn’t even need to be here! He is merely the catalyst that drives the dilemma of machine versus human. He could have been anything: Freddy Kreuger, Velociraptor, Agent Smith – Godzilla is merely the thing to be destroyed, and for the hero to wrestle with that decision: become a monster to destroy him or stay human and let him live. There is truly no “character” to the giant beast in this series – he is alien and incomprehensible and forgettable. Our minds race with the implications of all those other conundrums; isn’t sacrificing your life for others worth the loss of your humanity? Does Haruo’s retreat from sacrifice of his humanity make him less than human? If he fused with Mechagodzilla, would that get him into Yuko’s pants?