GODZILLA: FINAL WARS – the movie where every single Godzilla enemy turns up to try out their new rubber suit design, and where each line of dialogue makes no sense in the context of the line just before it.

It’s Godzilla’s 50th anniversary, his 29th film, and the 6th and final film in the Millennium series… and aliens from Planet X appear again, having traded in their disco spandex for some righteous Clive Owen longcoats. Unfortunately, they bring the same contradictory stupidity they displayed in GODZILLA VS. MONSTER ZERO (1965). Let me count the ways: 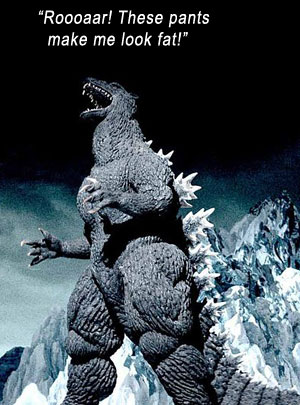 Giant monsters are busy destroying the Earth. Planet X teleports them away, then threatens Earth: “We are going to send these monsters to destroy your planet!” Uhm… weren’t they just doing that, X-dopes?

Leader X-alien (Kazuki Kitamura) tells captured humans, “We want to harvest you alive.” His next line – to his alien cohorts – about the humans: “Kill them.” Uh, that’s not exactly what ‘alive’ means, sir…

Our hero Ozaki (Masahiro Matsuoka, the Japanese Keanu Reeves) is lasered by X-Leader, along with everyone else. No one dies or anything – it’s basically just a lightshow. Suddenly, Ozaki becomes Neo and can stop the lasers from hitting them. It didn’t matter anyway because no one was dying from them. That same power, unfortunately, cannot be used to stop a Sweet Japanese Flying Sidekick.

Deus ex Gigana: After all the monsters are defeated, including a sleeker Gigan, THAT’S when X-idiot sends “a new, more powerful Gigan.” You couldn’t send him out sooner, before the ass-kickings? Complete with sushi-chainsaws for arms, Gigan Mk II is so dangerous he slices his own head off. (He must’ve seen the script. No wonder they didn’t send this doofus out earlier.)

In his first movie role, American Ultimate Fighting champion Don Frye, his voice a raspy croak after it navigates the labyrinth of that humongous porn-stache. The aliens can teleport, yet apparently not out of the way of his Sweet American Right Hook.

FINAL WARS is another movie I tried to watch as if “not a Godzilla movie.” Apart from its first battle sequence between enhanced humans (which was reasonably good) and the surprising quality of the effects (hologram computers, sets that look only half-plastic), as soon as monsters appear after the first hour, it quickly loses its brain.

The new monster designs are pretty righteous – but then again, we’re only comparing them to other Godzilla movies where the suits looked like a 5-years-old’s idea of scary monsters. Now they look like a 9-year-old’s idea of scary monsters. Monsters include: Gigan, Gigan Mk II, Rodan (with dynamic new flight mode), Manda, Mothra (and his annoying twin bitches), King Ghidorah, Anguirus, King Caesar, Minilla (Godzilla’s son), Kamacuras (mantis), Kumonga (giant spider), Ebirah (lobster), Hedorah (the smog monster), Keizer Ghidorah (a new monster’s first and only appearance in Godz cinema), and even Zilla (the only computer-animated monster here, basically a cheap GODZILLA 1998 animation, that they heap derision on, in keeping with inexplicable public derision of that movie – “stupid, tuna-eating monster”). Obviously director Ryûhei Kitamura and the four writers don’t subscribe to Less is More. And where’s Jet Jagaaa?

What the actual fuck?!

There is character development between Ozaki and the other hero soldier Kazama (Kane Kosugi), and a subplot involving their mutant DNA and its ties to Planet X. Mutant DNA and X, you say? Yes, there is the odd reference to X-Man, but not in that Marvel way.

It’s pointless trying to describe the asinine plot because there IS none. It’s a 10-year-old fight-game fantasy that moves from one action sequence to the next with no thought to why. The trailer is the movie: a senseless mashup of explosions, fistfights and big dumb rubber. Dynamic posing, people running in the air, jiu-jitsu, lasers shot from hands, a motorbike chase that is padding deluxe, teleporting, mind-control, badass leather longcoats, toyt Japanese women, and lots of oouwah!

For its production values 10,000 light years ahead of all other Godzilla movies up to this point (excepting 1998’s ROLAND-ZILLA), it deserves some credit. I can see why some fans contend this is their “favorite Godzilla movie” because the monster action is sensational (again, compared to other Godzilla movies); if they had just kept the plot around the monster fights simplistic, the movie might have been salvageable, but it’s just too tiresome trying to work our minds through the convoluted contradictory dialogue. In the end, after all the double-think explanations, it makes no sense at all why monsters are appearing at the same time all over the Earth. And Godzilla stomping the globe and killing them is not only pointless, but impossible, if he only travels at that lethargic stomping speed or even at that slightly faster swimming speed. Which begs the question: What the hell is wrong with those fans? 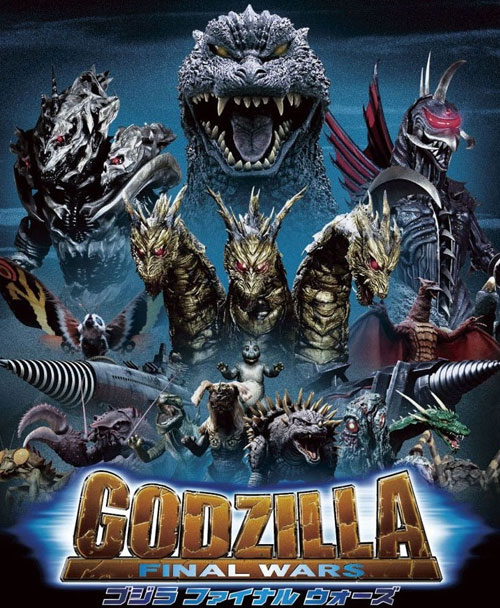 If you know the names of all these monsters, please get a life.

One small thoughtful moment while a farmer drives Minilla around (which is wasted immediately because he’s driving Minilla around): “Long before you were born, humans did a terrible thing that made Godzilla very angry. Humans made a gigantic fire that caused destruction. Godzilla has never forgiven them.”

Barring two films in the Millennium series (GODZILLA AGAINST MECHAGODZILLA and GODZILLA: TOKYO SOS), these films all adopted the stance of direct sequel to 1954’s original, ignoring the whole Showa and Heisei series, and even the other Millennium series films around them!

So I’m going to make like this series and ignore this movie.