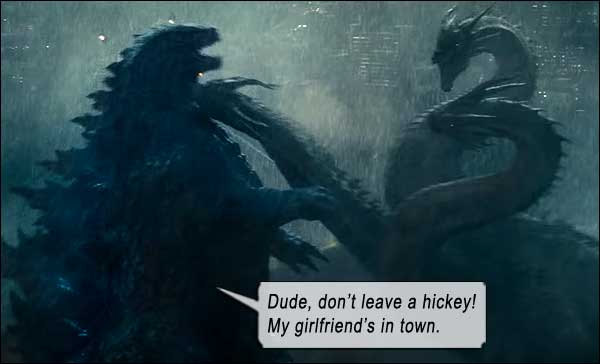 A retconned Godzilla for a short attention span fandom.

A Scientist is reanimating monsters (nay, “titans”) from subterranean hibernation around the globe, to bring balance to Earth’s environment through their radioactivity. (Get it? They’re being “woke” in more ways than one.) A titan named Ghidorah makes all the others do his bidding, causing them to destroy rather than renew. Too late, it is discovered Ghidorah is not of this Earth but an alien interloper, a malignant despoiler, a “false king.”

GODZILLA: KING OF THE MONSTERS follows on the heels of its Legendary Pictures predecessor, 2014’s GODZILLA, cementing the eponymous titan in the psyche of Generation Z as the savior of humanity. Meaning they’ve got Godzilla ALL WRONG.

Toho Company’s original 1954 movie GODZILLA was a parable of nuclear abuse. The Japanese monster named Gojira, born from the radioactive hellfire of an American atom bomb, was a scarred mutation that lashed out at mankind in pain – in a tragic metaphor of Nature striking back at hubristic humanity. This 2019 Godzilla has apparently been around for eons, chilling in the “hollow Earth,” surfacing occasionally to right wrongs – he’s no parable, no metaphor, no victim – he’s a superhero.

The original 1956 movie called GODZILLA: KING OF THE MONSTERS was the atrocious American re-edit of the 1954 GODZILLA (inserting Raymond Burr as the “star,” with everyone speaking American), because white racist Norman Rockwell Americans didn’t know what Japanese people were, and couldn’t read subtitles. Nothing’s changed. That movie was a pile of dogshit. And with its arrogant re-editing and omission of American blame for the A-bomb dropped on Japan, it actually perpetuated the very racism and hubris that the original cut decried.

Back then, the title was idiotic because there was only one monster – Godzilla. In 2019, the title makes sense, with the revelation of a cavalcade of “monsters” under our toes, all paying obeisance to a tacit leader, nay, a king… a Monarch. Which also happens to be the name of the ambiguously evil corporation seeking out the monsters, led by Charles Dance, phoning it in something fierce.

Vera Farmiga is the environmental scientist who invents the “Orca” – an audio device that wakes and calms the titans. Millie Bobby Brown is Vera’s teen daughter (can we have a moratorium on introducing teen characters in movies wearing headphones listening to the latest douchebag pop sensation?), angered at Vera’s duplicity in raising the titans, which end up destroying Earth, telling her, “You’re a monster!” (Ha! Didja see what the filmmakers did there?—uh, yeh, because it’s—heh, irony…) Kyle Chandler is Vera’s estranged husband, who wants to kill all the titans with extreme prejudice. Somehow, these three civilians end up giving orders to all the military personnel around them, because that’s okay during times of Godzilla.

Ken Watanabe oozes gravitas in the most somber, credible role as historian Dr. Serizawa. Remember I said ‘Nothing’s changed’ in Americans not understanding there’s such a thing as Japanese people? Well, Serizawa clearly keeps calling the lead titan “Gojira” (since he applied this name to the creature when it was discovered in the last film, he definitely has naming priority), yet everyone ignores him and just calls it “Godzilla”! Deaf or racist? Choose one. 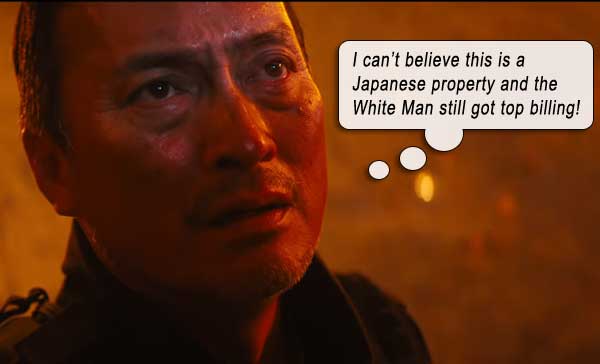 Sadly, Serizawa’s sidekick Sally Hawkins dies in this entry (even though her Q had noticeably risen since her gill-man affair in THE SHAPE OF WATER). Bradley Whitford is Generic Cubicle Guy, in a role supposed to be funny. Thomas Middleditch (SILICON VALLEY) is miscast in a role supposed to be serious. David Strathairn is the head Soldier, who, like all military men, can only get hard when ordering deathstrikes. Aisha Hinds is trying valiantly to be Okoye from BLACK PANTHER and failing. Joe Morton is the grown version of Corey Hawkins from the last film. And there’s Ice Cube’s son as a dumb grunt. (O’Shea Jackson’s role as Cube in STRAIGHT OUTTA COMPTON commanded respect; here, he is the voice of the dismayed audience – but, no thanks, I’d rather have someone represent me who sounded like they could read.)

These modern moviemakers (writer-director Michael Dougherty and co-writers Zach Shields and Max Bernstein) have begged, borrowed and stolen from the panoply of Godzilla canon, the whole shebang creaking under the weight of its homages, references, retcons and rejiggerings (only a few are listed here – consult your local YouTube nerd for a comprehensive “Easter Egg” list):

Although Godzilla’s giant monster foes accrued into an impressive rogues’ gallery of various guys in rubber suits over the decades, there are only three featured here: Mothra (a rainbowed, 300-foot moth, that shoots a silly-string concoction that looks suspiciously like semen), Rodan (a pterosaur-like 250-foot bird, birthed from a volcano, leathered wings afire), and Ghidorah (the golden triple-dragon with 500-foot batwings). The rest are made-up passengers (Behemoth-mammoth, Scylla-spider, Methuselah-ankylosaur, Muto-Cloverfield monster). No more rubber suits. These juggernauts are rendered in such stunning CG photorealism, their interaction with each other and their surroundings has never been more awesome, in the truest sense of the word. All these titans bow down to Ghidorah – except Mothra, who jizzes on him. 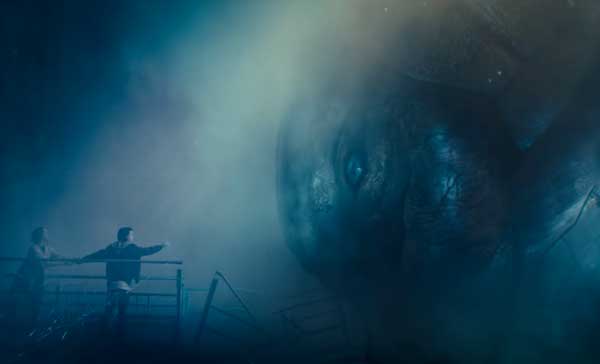 The main event: the Ali vs. Frazier of daikaiju – Godzilla vs. King Ghidorah! Round 7. [ding ding!] Is it worth its weight in popcorn? Mostly. If the filmmakers didn’t feel the need to cutaway to the humans so often, screaming or awestruck or running between the legs of battling monsters (because that’s totally how you escape injury). Godzilla has battled this bat-demon at least 6 times; this time, Ghidorah is intent on terraforming Earth to his charred cinder specifications.

RETCONNED because the previous movie referenced the original 1954 movie by saying, “those A-bomb tests in the Pacific that people thought birthed the monster – we were actually trying to kill it.” FUCK OFF. First of all, the original movie is a Japanese dig at America for Hiroshima – the A-bomb ATTACK ON JAPAN, not “tests.” And second: the A-bomb was, in fact, directly linked to the creation of the MUTATION they called Godzilla.

SHORT ATTENTION SPAN FANDOM because they know fans will take their gaslighting as truth, gazing loose-lipped at the distraction of the incredible production values and hearing “A-bomb TESTS”… Hmm, is that so? Okay.

RETCONNED because the filmmakers have re-wrought the ethos of Godzilla from a hapless victim to a proactive savior. Like the Terminator, the T. rex, Darth Vader and Magneto, they’ve reappropriated this bane of humanity as an unwitting helper bear.

SHORT ATTENTION SPAN FANDOM because Legendary Pictures knows they can’t possibly introduce Godzilla’s foes one by one per movie (as was done over 50 years, in the days before toxic social media), because fans and budgets won’t last for 20+ films, so they cram everything into one movie and survey focus groups on which monster gets the rose to move to the next round. All the original daikaiju are not even here (Anguirus, Ebira, King Caesar, Gigan, Jet Jagaa anyone?), because Warner Bros./Legendary obviously only secured the licensing for 4 faves from Toho Company (Godzilla, Ghidorah, Mothra, Rodan), and they’re banking on their new Millennial audience to latch onto some of the new dumbledores they’ve created from whole cloth (whose “histories” are already flooding the web, as if canon). We all know that before five of these “monsterverse” pictures are done, they will have retconned/ rebooted/ regurgitated some new version of the radioactive lizard (maybe if we can prove how woke we are, they’ll make him a lesbian), utilizing some of these all-new monster sidekicks and all-new human peripherals to run through his stomping feet going Oowaaah!

RETCONNED because they’re trying to make you forget Godzilla is Japanese – because that would spark too many questions about his real origin; they’ve made all these beasts international, birthed from the Hollow Earth Vagina. 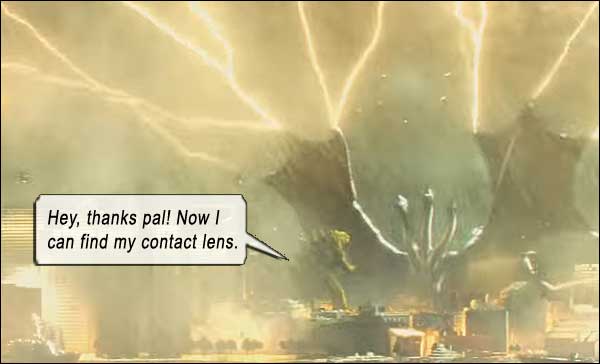 Godzilla and Ghidorah roar at each other, at opposite ends of the frame, across a desolate cityscape. This tableau was the Climax Shot for every film called Godzilla Versus [Insert Stupid Name]. It was usually followed by Godzilla half-running/skipping to meet his foe, who also half-ran/skipped towards Godzilla, who was usually wearing a headpiece that looked like the Cookie Monster. Thankfully – those days are long gone!

The visual effects teams have outdone themselves. Just look at that trailer shot of Godzilla rising in the rain. The lighting, the shadows, the runoff, the depth, the weight, the sound design… Now the Climax Shot will throw you back in your seat, as these new titans shake the very Earth as they thunder toward each other, roars like jet engines splitting the screen, clashing head-on in bone-breaking fury, camera tracking them low and pushing-in on the impact shot… It’s the most epic rendition of these icons ever!

The humans are a different story – rendered utterly useless to the plot. Like every Godzilla movie, there is the Scientist, the Soldier, the Politician, and the Annoying Kid. All shoehorning their picayune treacheries and disagreements into a world-girdling story in which they matter less than microbes.

Fearful talk of Godzilla’s radiation levels increasing, which will lead to a nuclear explosion. He starts glowing red in his empowered, heightened state, and then – that whole plot thread just peters out! Because they have to tease Godzilla versus Kong in the post-credits scenes. But they’ve reappropriated both of them as good guys; no more considered nasty beasts that kidnap white women. Who do we root for???

Thus will we separate the Kings from the Godz…