Trying to fix something that ain’t broke – and breaking it.

No, it’s NOT just the same movie re-edited. I speak for all cucumber reviewers when I contend – nay, insist – that the 1956 American re-edit of GODZILLA (1954), re-titled GODZILLA: KING OF THE MONSTERS, cannot, must not and should NEVER be reviewed with the original, even as a garbled footnote. This dog-poop warrants its own review as it is a completely different movie. Oh, it’s about the same nuclear-birthed monster terrorizing Tokyo, but the American edit has turned a cautionary tale of nuclear abuse into a B-movie with a guy in a monster suit. 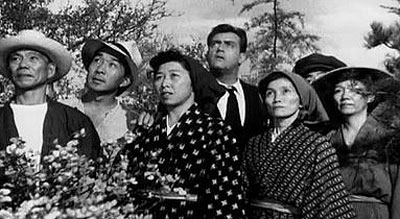 ”Oh my God! There’s NOTHING coming at us!”

Now, author and film historian David Kalat has very properly pointed out that when modern commentators disdain the “guy-in-rubber-suit” method in this film, we do so as if GODZILLA happened to be one of many such “guy-in-suit” movies, and resorted to using that technique out of laziness. Kalat points out there was only one such movie at the time using that method – this one. I understand his umbrage at having to field insults and defend this movie, even as its original version stands right next to it as a shining example of how to make a great special effects/cautionary tale resourcefully. And let’s face it – they use the same footage of the “guy-in-suit” here as they do in the original. Difference is: in the original, we were not the least concerned with the “guy-in-suit” aspect because everything else was top notch, and we gave a pass to the suit due to the sincerity of the production. Here though, when I mention the “guy-in-suit” it’s because there is so little weight given to the movie’s actual themes (with all the political and “Americanized” editing) that all that is left to focus on is the banality of the guy in the suit.

It’s a hatchet job on par with the greatest sins in the King James Bible; it’s intentional, not accidental; it’s murder, not manslaughter; racist, provincial, uneducated and politically gutless. What a hot mess!

Steve Martin, played by a Wild and Crazy Guy, the chain-smoking Raymond Burr, is a reporter in Japan, ostensibly visiting an old friend from a movie that was made two years ago, Dr. Serizawa, but in reality to remove all the majestic layers from that movie and emasculate that movie’s stars because American With Big Dick Coming Through. He then proceeds to take up all the oxygen in every room by pretending he is in every scene through the cunning use of bad cutaways, while narrating like a Lonely Guy the story of being trapped in Tokyo as a big creature rages through the city. The Jerk.

Those who have witnessed the foreboding spectacle of the original GODZILLA may well gnash their teeth and rend their garments, as director Ishiro Honda‘s and writer Takeo Murata‘s work is raped by U.S. director Terry Morse and U.S. writer Al Ward. All the characters integral to the story and its themes have been diluted, scenes have been moved around to accommodate a non-chronological narrative, and – the worst insult of all – the Japanese translator for Steve Martin isn’t even translating what the Japanese characters are actually saying in the scenes they are showing – he’s translating to comply with the reworked storyline of the U.S. version. Dirty Rotten Scoundrels!

The obvious insult is bringing in the swinging American penis so that Whitey can relate to this Japanese tragedy – because their big lug of an avatar is supposedly right amongst the screaming crowds and supposedly seeing this giant creature with his own eyes. But then Whitey producers had to go that extra mile to emasculate the Japanese characters. Look at how they shunt aside the somber, educated paleontologist character played by the original film’s voice of reason, the legendary Takashi Shimura. And listen to these assholes dub him with Droopy’s voice!

The nonchalant racism is jaw-dropping! In the scene where Shimura shows slides of dinosaurs, he still gives the laughable date for dinosaurs as “2 million years ago…” but that English dubber adds insult to injury when he pronounces brontosaurus as “bonnasahrus,” and then caps his illiteracy with: “One answer is that some rare phemomemom of nature caused this…”

They carve GODZILLA like a turkey until it is unrecognizable. All implications or references to America’s H-bomb or Nagasaki, or the political fallout of weapons of mass destruction have been cleanly excised (let the winners rewrite history – again). Then they have the AUDACITY to use the original soundtrack by Akira Ifukube, which I presume gives them untold balls-swinging license to pronounce on the DVD cover, “The Original Godzilla Movie Classic!”

Where can I sign up to beat the shit out of these venal swine?

Who are they trying to fool? Blind 12-year-olds? The filmstock for the new inserted American scenes is not as crisp as the original black and white stock, and the shots where they use the backs of people’s heads (as stand-ins for the original movie’s actors that Steve Martin is supposedly talking to) are jarringly ludicrous. Add to that, Martin’s irritating melodramatic narration, and this GODZILLA ends up as cheesy as any 1950’s disaster Z-movie.

Ultimately why is Steve Martin here? The actual stars of the original movie still hash out the Oxygen Destroyer climax. Martin does nothing. He’s not the Hero or Nemesis, and I hope to God he wasn’t meant to be the big fat chain-smoking Damsel in distress… He is supposedly the voice of objective observer. Like the Japanese cast couldn’t do that themselves. And DID in the original! (As someone once said to the male lead of the original, who used to introduce himself as the hero of the movie, “Hey, Godzilla is the hero.”) It’s an altogether embarrassing role, but apparently Burr took it all very seriously, and was proud of it. A sign of the times. (See POFFY SEZ.)

The final scenes where the original movie wrenches at our emotions not only for the blameless monster but for the people caught in their moral conundrums and love triangles – is skewed; is perversely morbid, due to Steve Martin standing in some other dimension puffing on his pipe, supposedly onboard the ship where the final scene takes place. Watching everything. Doing nothing, except once again taking up all the oxygen in the roo— Heeey! Raymond Burr is the Oxygen Destroyer!

A Monster Point Of View.

David Kalat (author, A Critical History and Filmography of Toho’s Godzilla Series, 2007) provides commentary on GODZILLA, KING OF THE MONSTERS, and zealously defends this movie. His lucidity, intelligence and downright diabolical knowledge not only of all things Godzilla, but also of the times in which this movie was released, and of the societal trends that made the butchering of this movie not only commonplace but the respectable desired method by which foreign films of this nature were marketed, allows us to place ourselves in the mindset of audiences of the day and to appreciate the film a little more for what it is and what it was intended to be, rather than the insult it has become perceived as.