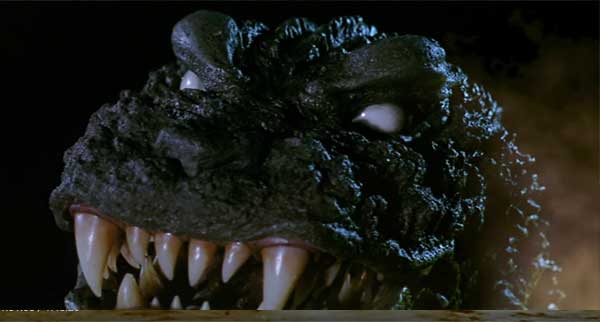 The zombification of one Mr. G. Zilla.

It’s what’s inside that counts. And inside Godzilla are the souls of thousands of wronged people, the Old Man telling us, “This animal contains the restless souls of countless people who perished during the battles of the Pacific conflict. It wants to attack us because the Japanese people want to forget the pain and agony they’ve inflicted on all those people!” I guess he means the war-dead…?

Whatever he means, this is the paws-down scariest Godzilla ever to grace the screen since the 1954 original! Speaking of which, this movie named by a Tourette sufferer, GODZILLA, MOTHRA AND KING GHIDORAH: GIANT MONSTERS ALL-OUT ATTACK, is yet another Godz movie that ignores every other canon movie except the original. (And do I have to say anything more when the whole plot of the movie is in its own title?)

When Admiral Tachibana (Ryûdô Uzaki) investigates an American nuclear sub gone missing, his cameras pick up far-off dorsal spikes moving between the underwater mountains – “I can’t believe it!” Slam into –

The well-designed (gigantic) opening titles; showing the skin textures of the three monsters as backing.

Later, to a group of cadets, Tachibana tells of the 1954 attack from the beast called Godzilla. Far from being irrelevant history, he links it to a recent unidentified giant monster attack in New York City… This movie was released in December 2001; are the writers implying that – Sep 11th was a giant monster attack? Whoa! Talk about “too soon”! To soften the blow, Tachibana goes on to mention “and other sightings in other countries…” Dude! Not okay!

Nonetheless GMK is one of the best written and directed Godzilla actioners, with a mystical aura that somehow boosts its thriller elements. The creature battles are creative and amusing (mainly because they attain a higher production level than what we are used to seeing) and the soundtrack is eerie, invoking a dread attraction to these creatures that we’ve grown accustomed to; we see them in a new light. (Kow Otani composes; he scored the kinetic modern GAMERA trilogy! It must have been hard for any composer to walk in after Akira Ifukube conjured that inimitable 1954 soundtrack, but Otani comes very close to recapturing Ifukube’s cosmic energy. This movie’s dark themes only help.)

Tachibana’s daughter Yuri (Chiharu Niiyama) is a reporter for a National Enquirer-type TV show called Digital Q. While she and her crew are reporting a mysterious monster at a lake (an obvious sham story), she spots the Old Man From Scene 24 lurking and watching them. Later, she would meet him again with her crew, where he would tell her the legend of Godzilla’s aggrieved souls, “Atomic weapons have given it capacity for survival. But it cannot be defeated with weapons” (so he’s mixing in the radiation origin as well), telling her to “wake the dragon” to defeat Godzilla (is he talking about shooting heroin?). Her producer Takeda (Masahiro Kobayashi) finds a book related to the Old Man’s stories, The Guardian Monsters.

The book tells of three monsters that will rise to combat Godzilla when the voices in his head get too loud: Baragon (a rhino-like horned red beast, not to be confused with Gamera’s Barugon the rainbow demon), Mothra (the mystical fairy-moth), and King Ghidorah (the golden three-headed dragon, in this film represented as “not yet adult,” so smaller than Godzilla).

The first act is filled with ominous teasers, as we see a group of teen bikers buried in a tunnel by a dark behemoth (Barry), and a group of teens at a lake getting rowdy until a giant slug (Mothy) rises from the black waters to claim them; both groups found dead, second group in a giant cocoon! (Seems the Japanese have caught up with America of the 1950’s, blaming teens for all the evils in the world.)

But just to be clear, these teens were not raping, killing and starting race riots: the bikers were riding up close to drivers and yelling horrific curses like “Get out of here!” and one teen boy at the lake was about to drown a dog. He obviously brought the dog because he wanted it near him, but when a girl (probably his crush) says she hates dogs, he goes straight to “Okay, I’ll drown it then”! Really? You’re going directly to drowning; you can’t just abandon it and let it run away? I know this is a movie for kids, but these are the best “bad” indicators the sophomoric screenwriters could come up with? 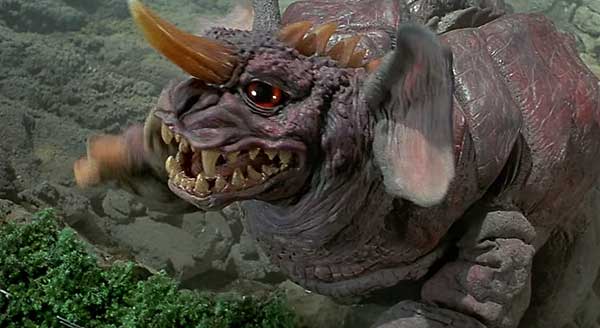 When Godzilla rises in Tokyo Bay, it is epic. Shot from below, gargantuan! His new design, a slight hunch in his neck, ferocious canines and – dead white eyes! When he walks they’ve added impact tremors. And he KILLS people. Clearly. There’s no doubt now, as no soldiers climb out of jeeps, no civilians crawl from rubble – when his tail smashes against a hospital wall, the girl screaming inside hooked to her hospital bed is DEAD.

Long shots of Godzilla coming ashore. Toho Company is still using guys-in-suits but they have stepped up the quality of the process shots and they’ve added minimal CGI (especially to Mothra and Ghidorah).

Tachibana’s war room is inundated with reports of destruction, but make no moves, due to red tape. Tachibana himself is furious at the moribund bureaucracy – he was THERE 50 years ago as a boy when Godzilla first made landfall, and killed his parents.

Godz unleashes his atomic breath, and from a faraway schoolroom, about to evacuate, we see the mushroom cloud rising. Brilliant directing!

Baragon strategically burrows up to meet Godzilla, gaining higher ground – and this is what I meant by the action being amusing: when Baragon leaps full-stretch at Godzilla from a nearby cliff, it’s an impressive shot, but I’m just thinking of the guy in the suit having to stretch out that rubber to make that leap. It’s great we’re laughing for a slightly different reason now; not exactly AT them, but not exactly WITH them either.

In the crowd, some social commentary on a phenomenon that won’t be prevalent until a few years hence: a woman in the far-off crowd sees Baragon, “He’s scary, but kinda cute as well.” Boyfriend says, “Quick, let’s take a picture with it. And then we’ll run!” Priorities. This shot leads to the tourists seeing Godzilla peering over a mountain (an homage to the original), but whereas everyone on Odo Island lived, this dead-eyed Godz pushes over the mountain killing all the camera tourists!

Godz flips his tail at Baragon, who lands on the media helicopter – all dead. Love it. Then Godz burns Baragon to dust!…

“The Internet” is featured prominently, because it’s becoming a part of life, insinuating itself into the vernacular, but in a clunky way: “I’ll send the pictures through the internet”; “Did you see my website?”; I’m the webmaster”… Oh, I can’t imagine how they’ll be laughing at US in 50 years – Have you seen my YouTube Channel?…

The military attack Godz. Padding. Yuri is there, reporting rogue and sending the footage through the internet to her company.

Meanwhile the Old Man from Scene 24 is waking Ghidorah with his rock amulet.

From a cocoon on the lake that looks like a giant pair of hairless balls, Mothra hatches – full CGI. She appears without her contingent of annoying singing twins – but as she flies overhead to meet Godz, two twins rush forward from the crowd to watch her pass.

Yuri implores the military, “You must not harm the Guardian Monsters!” Again a civilian giving orders to the military, which do not question her. I keep forgetting you can DO that in times of Godzilla.

Showdown in Tokyo, because why the hell not?

Mothra attacks Godz by flapping her wings around his head, and Ghidorah goes full frontal – Great Dane jowls and Chinese dragon horns swooshed back. It’s a grim battle as Godz draws Ghiddy’s blood… Wasn’t this dragon originally an extra-terrestrial alien weapon, unleashed to take over the Earth (GHIDORAH, THE THREE-HEADED MONSTER)? And remember when it was spawned from three “Dorats” and terrorized Japan (GODZILLA VS. KING GHIDORAH)? It’s not your imagination; writers Keiichi Hasegawa and Masahiro Yokotani have re-rendered Ghidorah here as Japan’s protector! That oughta confuse the big guy.

And director/co-writer Shûsuke Kaneko (also from the excellent modern GAMERA trilogy) drives the screaming story forward kinetically. The interaction of the daikaiju with humans is very cool, but let’s put it in perspective: this year gave us tentpoles like the first LORD OF THE RINGS, the first HARRY POTTER and JURASSIC PARK III. CGI was second nature in Hollywood; that’s what GMK was up against, with efx that remind us of the SciFi channel but with much greater care taken on the miniatures and the details of the rubber suits.

Mothra is burned to death, and her particles energize Ghidorah. Glowing gold, he turns CGI and pushes Godz into the bay. Ghiddy follows underwater, flapping batwings.

While Yuri has upped her network’s Q rating by reporting from the scene of a Godzilla fight, and gives a platitude-laden speech, her father Admiral Tachibana takes his little sub under the bay to attack Godz with a special missile. Godz burns Ghidorah to death with the biggest fireball ever seen in motion pictures. In the aftermath of the blaze, we see the spirits of Bazza, Mothy and Ghiddy combining their might to attack Godz with lightning bolts and the power of sequels.

Ghidorah: Stop dragon my heads around.

Then Godz swallows Tachibana’s sub! Tachibana finds himself in a cavernous space sinking down. (How do the muscles of Godzilla’s gullet push food down if it’s that capacious?)

There is a touching connection between father and daughter that I think is lost in translation. An earlier scene with Yuri drunk in front of father led nowhere, but it was meant to convey a rift that I believe is mended when Yuri appears in Tachibana’s sub to wake him from a dream.

As Godz tries to blow his atomic breath onto Yuri, Tachibana fires from inside. The missile shoots out through Godzilla’s neck. But I thought Godzilla “cannot be defeated with weapons.” This is why Yuri appeared. Tachibana loaded his weapons with love. [single tear]

Tachibana had a point when confronted with the news that Godzilla was the embodiment of wronged soldiers and civilians: “Our soldiers died for their country. Why do they now want to destroy Japan?” There’s no real answer. Maybe 9/11?

Godzilla sinks in a whirlpool of blood! One last atomic fireball to disintegrate himself! A final scene shows his beating heart on the ocean floor.

The unmistakable epic majesty of Ifukube’s thunderous theme rolls under the end credits! And that, movie maniac monsters, is the true Soul Of Godzilla!