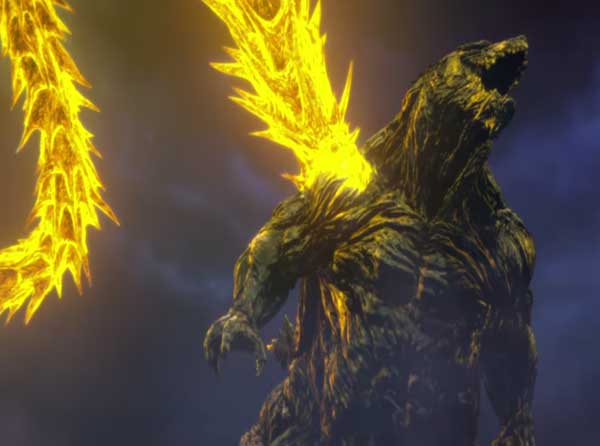 As well as the rambunctious production design, evocative cartooning and chilling action sequences, PLANET EATER is a whirlwind of moral conundrums, ulterior agendas and existential magniloquence, as the twisted Cult of Ghidorah calls down their god to destroy the world, in order to end the suffering on it.

Religious zealot Metphies the Exif narrates a prelude about his alien race watching humanity for millennia, awaiting the arrival of a hero “to lead humans to God.” That hero is young Haruo, leading humans in battling Godzilla for the past two movies. With its philosophical gobbledygook and extolling of God, this prelude sounds alarmingly like a mashup of THE MATRIX and an ad for Scientology, until we realize later that Metphies’s “god” – is Ghidorah!

Captain Haruo Sakaki (once again voiced by Mamora Miyano in Japanese, Chris Niosi in the English dub) sees his surviving troops turn to Metphies (Takahiro Sakurai, Lucien Dodge) to save them with religion. If it weren’t for one of the characters trashing “religion – the greatest form of propaganda” we’d think this Godzilla entry is coming at us straight from Xenu’s spaceship.

Onboard the mothership orbiting Earth, the second group of aliens allying with humans against Godzilla – the Bilusaludo – are in heated discussion with human leaders over who was the traitor to humanity: Haruo, for not turning into nanometal to defeat Godzilla, or the Bilusaludo, by trying to subsume humans with nanometal. Story elements like these keep the tension between all the characters electric…

But wherefore, thou ask, is the titular star of this series? Well, Godzilla doesn’t appear until exactly halfway through the film, but the human-alien-alien story is so compelling we don’t even miss him. For the first half, Godz is frozen on the battle plain where we left him in the last movie, either rejuvenating, hibernating or playing statue. 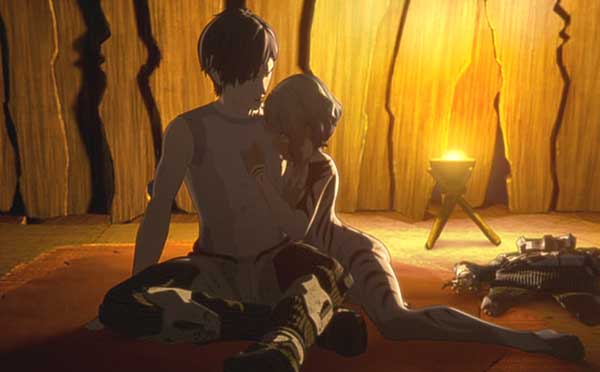 Fans were apparently disappointed in the last film’s representation of Mechagodzilla as a “city” instead of a stupid-looking robot version of Godzilla. (CITY ON THE EDGE OF BATTLE, 2018.) Also, there was “too much talking.” I guess these small minds are the same people who made those Godzilla puppet-headpiece abominations a success. Lots of dustups and minimal talking. In those movies, as soon as Godz showed up to fight whatever rubber-suited menace the writers had cooked up in their LSD fevers, all the human storylines were reduced to oouwaah! How then could those small minds fathom this trilogy of sincere, well-written films in which the human drama is interwoven with the Beast’s, and both play an integral part in ramping toward mayhemic conclusion?

Jesus-freak soldiers claim Haruo, like them, was saved by a higher power, by being immune to the nanometal. Androgynous Metphies chimes in, “The will of the divine god!” But Haruo’s lieutenant Martin (Tomokazu Sugita, in a very expanded role here), scientifically attributes the immunity to antibodies provided by the tribal Houtua – those sexy spinners from the last film who tended the troop’s wounds. He won’t tell the troops though, for fear of retribution, which is a commentary on weak minds unable to be pried open once they latch onto a demagogue. Here’s the clincher: the demagogue himself, Metphies, knows the truth as well – but won’t tell the troops because he wants their obeisance!

I love this realistic depiction of human ignorance, weak-mindedness and stupidity! And in a cartoon!

Directors Hiroyuki Seshita and Kôbun Shizuno, and writer Gen Urobuchi, craft their moral conundrums based on the idiocy of everyday society, the difference being, the repercussions for the small-mindedness comes immediately because our characters are in a life-or-death struggle on an Earth hostile to humans. Also, in the treacherous Metphies (once Haruo’s trusted mentor), the filmmakers have unwittingly drawn a very modern caveat: Watch out for those non-binary dudes.

Haruo spends a little time hovering over his recent lover and fellow soldier Yuko, tragically in a coma after their Godzilla battle, almost subsumed by nanometal, now kept barely alive by that same cyborg substance. But Martin advises him there’s no more potential panty there. (Unless you’re into that kissing-a-corpse Snow-White-style kink.)

So atheist Haruo goes on the lam from his own men, with the sexy Houtua chick (Reina Ueda) – who gets naked almost immediately! “To win is to survive. This is our purpose – to create life.” She’s absolutely right! And it helps that she’s a spinner with a firm rack that doesn’t speak much. And she has a twin who feels the same way!

Metphies calls down his god – “the golden demise” – while his counterpart onboard the mothership chants the same lines, “Feast upon us and bring us divine victory!” At this point, we can’t believe no human is saying, “Whoa! Take it down a notch, Charlie Manson!” And we also don’t see why Metphies needed the troops’ devotion. Yes, they are all chanting as well – like brainwashed sheep of any stripe working against their own interests (kamikazes, Jim Jones cultists, Dumbo Donald racists) – but the Golden Demise didn’t need their reverence to appear; it was summoned from the ether by mathematical crystals. 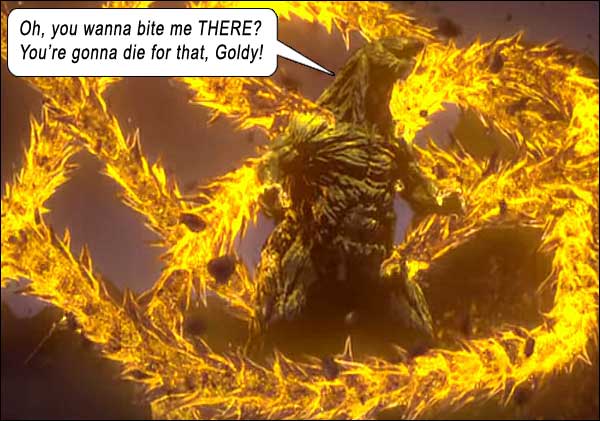 Snaking out of the smoky altar, to the strains of Takayuki Hattori’s eerie soundtrack, a chilling three-headed shadow, entwining with the humans as an invisible entity and lopping off heads and arms gracefully!

And all E=mc2 breaks loose!

The thing called Ghidorah emerges from a singularity – a black hole! – and no instruments on the mothership or on Earth can read its presence. In a haywire confusion it comes, slowly, silently, a spacetime anomaly, a golden dragon head. The sequence is absolutely terrifying – this is the most emotion I’ve ever felt watching a Godzilla film (not counting the insurmountable hilarity watching the Showa series).

As the golden shadow dismembers people at Metphies’s altar, in orbit, the mothership is entwined by three dragon heads on elongated necks, encircling, crushing. And when the ship explodes, we witness an incredible tableau of the explosion’s shockwaves echoing into the upper atmosphere.

Every entity, every race, every creed is treacherous in its own way, pushing its selfish agendas for its own survival and pleasures… but Metphies is something rarely seen in movies – a being out to destroy every planet, every race, every living cell in the universe. “If our lives are only made up of our suffering then there’s no greater relief than ending them. It’s a blessing to be destroyed.” He’s a true religious fanatic, that I… kinda agree with…And he rationalizes the destructive force of Ghidorah, declaring it will also defeat Godzilla, Haruo’s bane. (cough–along with the whole planet–cough)

And three golden heads snake down from different points in the blackened clouds toward Godzilla, awakened by the spacetime disturbance. This is not your granddaddy’s Ghidorah: there are no batwings, the heads are not joined at a rubber bodysuit, pulled on strings; this dragon is a metaphysical fourth-dimensional gravitational field distortion!

Godzilla sees the anomaly approach – as the humans see it visually, but not on their instruments! – and pierces the sky with his atomic blast… And the blast CURVES around the onrushing demon – exactly like light bending around a gravitational juggernaut! The humans cannot believe what they are seeing yet not seeing. The gleaming wraith bites down on Godzilla’s shoulder, as Godzilla grabs at the dragon’s neck – and his claw passes right through the neck like a ghost! Insanity. Meter. Redlining.

Rocks float. Reality flickers. Space bends. There is no coming home from this one… 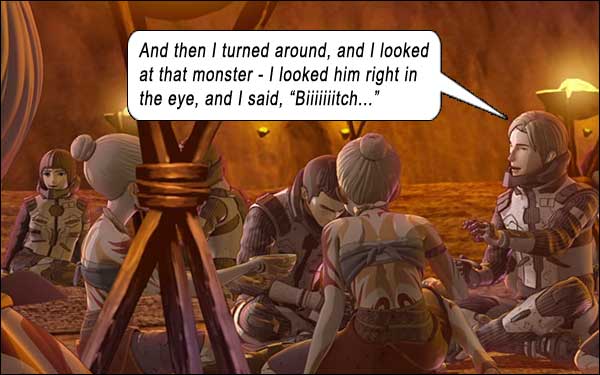 But PLANET EATER has more in store…

As the movie switches between Godz slowly, mercilessly dragged into another dimension by Ghidorah, and Haruo floating in a philosophical mind-bend brought on by the wizardry of girl-man Metphies, the Houtua spinner-twin takes Martin on a midnight ride to salvation… to the Divine Egg.

The name ‘Mothra’ is never spoken, but we recognize the Lepidopteron silhouette as it cascades into view. But it is not the glorious rainbow moth we know and love – the Houtua god is a telepathic manifestation of unbridled power, and only when it glides into sight all in black, do we realize that the Houtua women’s bodies are fully decorated in the pattern of Mothra’s wings!

And we identify a tonal shift as it is happening: Godzilla is savior again. With the help of the human who wanted him dead. And yet again, the movie displays its bravado in cueing tender music under the fiery final battle.

There are so many layers of irony and metaphor when Godzilla (the planet terraformer) is saved by Haruo (the planet saver), when Haruo destroys Metphies (the planet destroyer).

The Godzilla Trilogy comes to an enigmatic end, with Godzilla’s adversarial position left ambiguous, as Haruo and the survivors make a place for themselves on the blasted Earth, flowers eventually blooming on the graves of guns, and the purple haze philosophies growing so contrived and contradictory that I ended up not sure which side of annihilating the universe I was originally on.