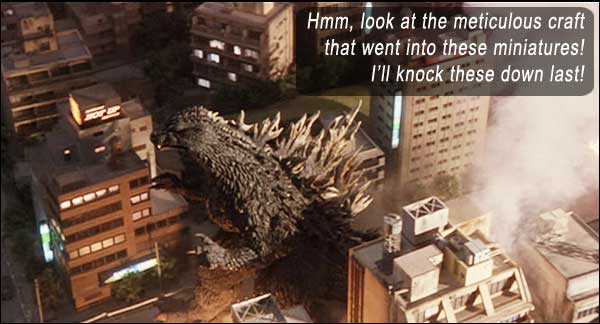 GODZILLA: TOKYO SOS is a heart-rending, dambusting actioner that turns our eyes into running rivers, as it revolves around one word: sacrifice!

One year after GODZILLA AGAINST MECHAGODZILLA (2002), Godzilla is heading toward Tokyo again, as the military races to repair the Mechagodzilla that he damaged while being repelled. Meanwhile, Mothra’s twin emissaries warn Japan to return Godzilla’s original bones to their ocean graveyard, the bones used as the framework inside Mecha’s bionic exoskeleton. That puts Japan in a bind, because Mecha is Japan’s only defense against Godzilla.

TOKYO SOS is the first direct sequel to a Godzilla film, helmed by the director who blast-furnaced the last magnificent entry, Masaaki Tezuka, who co-writes with Masahiro Yokotani. He’s not the first director to do two Godz back-to-back – Ishiro Honda did GHIDORAH followed by MONSTER ZERO; Jun Fukuda did GIGAN followed by MEGALON – but Tezuka’s AGAINST followed by TOKYO prove he is undeniably the best. All those other stand-alone entries were unfortunately part of the ass-klown Showa series that reduced their directors – even the mighty Honda – to studio “yes men,” chain-bound to churn out Godzilla for kids.

While in this sequel, Tezuka retains the ferocity of his Godzilla and all his creative framing, bringing even more intense emotion to bear, and upping the stakes on moral ambiguity and sacrifice.

Just like the last film – suspenseful introductions to the daikaiju. In a cold open, two fighter jets try to shoot down an Unidentified Flying Object over one of their bases. In short bursts through the streaming clouds, we see it is a gigantic Lepidopteran – Mothra!

Swimming carefree through the sky, as the jets shudder against the night; unnatural steel amongst nature’s serene beauty. Eerie, ethereal singing through the pilot’s headsets! (Those flippin’ twins again!) They fire. Mothra easily avoids the missile and sprinkles her bling on it. A picture is sent back to base, and as the pixels resolve, the Admiral’s eyes widen, “Oh God!”

Masaaki Tezuka has such an eye for the dramatic, framing daikaiju like superheroes, it’s a shame he didn’t do more Godz films, to leap in line with decadent Western filmmaking.

Mothra’s twin fairies (called the Shobijin, featuring two of the hottest to ever play the roles!) visit old Dr. Chujo (Hiroshi Koizumi), warning him it was a mistake to make Mechagodzilla from Godzilla’s bones: “No human may touch the souls of the dead.” Chujo first encountered Mothra on Infant Island in the 1961 film MOTHRA (made by Toho Studios, directed by Ishiro Honda; at first untethered to the Godzilla franchise, when Mothra appeared in 1964’s GODZILLA VS. MOTHRA, it was probably one of the first ever “crossover” or “shared universe” films!), so the fairies appeal to him as an old friend.

With Dr. Chujo are his nephew Yoshi (Noboru Kaneko, the Tom Cruise of this tale), on the Mechagodzilla tech crew (so – conflict of interest right off the bat!), and his grandson Shun (who fulfills the Annoying Kid plank in Godzilla policy – but he’s actually a very somber actor who will be involved in one of the film’s many sacrifices). Chujo asks, “What if Godzilla attacks again?” “Then Mothra will protect you.” Well, that’s demonstrably wrong, as the big Moth has never beaten Godz without the help of some other rubber monster. But there’s more: “If the bones are not returned, Mothra will declare war on humans.” Geez, you can’t win with these rubbers!

Chujo relays this message to Japan’s Premier (Akira Nakao, reprising his role), while Yoshi meets the new Mecha-G crew. Akane is on the crew (Yumiko Shaku), the heroine from the last film, her role sadly diminished here, in favor of another button-nosed cutie and potential love-interest, Miho Yoshioka as pilot Azusa. Loose-cannon pilot Akiba (Mitsuki Koga) clashes with Yoshi (the age-old big-dick conflict between top gun and engineer), which will conclude poignantly with Akiba helping save Yoshi’s life.

Yoshi, once dedicated to the Mecha-G (also called “Kiryu” = “machine dragon”), now questions the nature of the robot after the fairies’ warning (he thinks back to Akane musing that “Maybe Kiryu doesn’t want to fight…”)

As Godzilla approaches Tokyo, the usual shots of people evacuating, then the added gravy of Tezuka’s dramatic framing, as a soldier who is helping fleeing crowds looks up – and sees scores of missiles contrailing above the skyscrapers, headed towards Tokyo Bay toward the surfacing monster. What a great shot! Then the tragic scene of Dr. Chujo running against the crowds, to find his grandson Shun, who has disappeared with his Mothra amulet… In an intriguing reveal, Chujo finds the boy in the schoolyard, placing desks in the shape of the amulet – to summon Mothra! As the news chopper sees the symbol, a giant shadow passes over the yard – the moth! Total superhero territory!

As suspected, Mothra cannot hold off the mighty Godz simply by flapping her wings at him or showering him with bling. So the fairies are back at the island, singing to another giant egg…

The Premier, wracked with the choice to deploy Mecha and incur the wrath of Mothra, or allow Mothra to die at the hands of Godzilla, issues the order – “Save Martha!” – Why did he say that name? – I mean, “Save Mothra – deploy Mechagodzilla!” 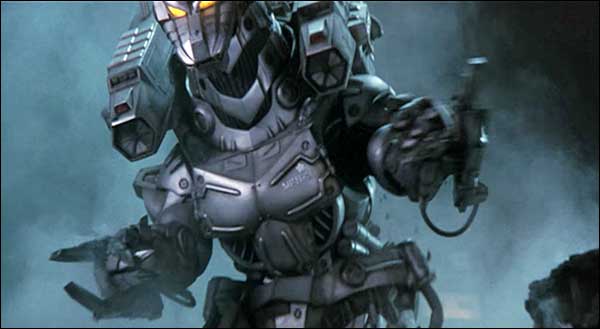 Kiryu Eleison, down the road that I must travel.

Mothra goes down at Godzilla’s atomic breath. On the Island, the egg hatches – twin slugs! The NextGen Mothras! – and start swimming over the waves to Tokyo. Another hero shot: as Godz moves in for the final blow, missiles hit him from behind – the Mechagodzilla soaring to the rescue!

It’s the cool-looking design from the last film, with the War Machine body armor and wolfish snout. Unleashed without being fully repaired or tested, Akiba controls the Kiryu from a hovering jet piloted by Azusa; armed with missiles, but no Absolute Zero, which took down Godz in the last film. The missile efx are very cute, looking like powerful, massive dambusters as they issue from Mecha’s various ports, when we consider they are just tiny foot-long toys.

Furious battle between Mecha and Godz, as the slugs arrive, and confer with the grounded Mothra. It’s oddly endearing, then Godz approaches and pitches his atomic fire at Mothy’s slug kids – and Mothra throws herself into the beam to save them!

Like the 1954 original, TOKYO SOS transcends the guy-in-rubber-suit syndrome. The third lucid entry in a row for the Millennium series; sleek production values (the scene of Godz destroying a nuclear sub underwater was game!), emotional music by Michiru Oshima, and with the top-notch director, the performances are bound to be compelling. As with the last film, the sexism is non-existent as the female pilots are all equal with the males in ranks and abilities. The high stakes drama is played so well, I found myself welling up for all these characters, as each of them sacrificed for the good of the many: the young boy braving death to summon the moth, Yoshi braving the battle scene to rescue Shun, and now, you got me weeping for the death of a DOLL called Mothra!

Mecha goes down, malfunctioning, and the only person who can fix him is Yoshi. Big fist-up for mechanics as the pilots hover nearby, helpless. Yoshi goes inside the Mecha and completes his repairs, but the hatch – jammed! – he can’t get out! He lies to Command that he has exited the Mecha, because he knows the pilots have to take it into battle again. Another sacrifice! 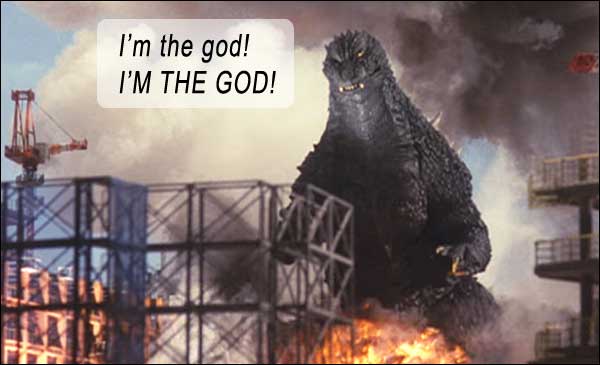 Yoshi comes to inside Mecha, weeping and confessing to the noble animal that he never understood Kiryu until now…just as the Premier gives the order to Mecha pilot Akiba to finish off Godzilla!

Nothing happens. Kiryu stands like a statue above the cocooned Godzilla, the slugs smoking cigarettes in bed. Everyone hears ethereal singing – those flippin’ fairies! (I have to ask: if these magical nymphs can telepathically project their voices into everyone’s head, why not lead with that facility? Don’t just bother Dr. Chujo with a personal appearance and make the old guy tramp over to the Premier – tell everyone at once about Godzilla’s bones!) They’re Mothra’s bottom bitches, but somehow their voices awaken the soul of Godzilla within the machine dragon.

Of its own volition, Kiryu picks up Godzilla. As the command center screams haywire, Yoshi, from within Kiryu, tells them Kiryu is no longer under their control. Now they know he is trapped in the giant robot!

The monitor screens in front of him blare emergency warnings, as Yoshi hangs on, ready to go to his death for the sake of the world, Kiryu flying with Godzilla over open ocean, heading for the Japan Trench… But Azusa will not let Yoshi die, shooting out the broken hatch, as tears stream down MY face…

Seemingly aware Yoshi is trying to escape against massive G-forces, Kiryu turns mid-air, so Yoshi can “fall” out of the hatch, the monitor screen still blaring warnings. As Yoshi hangs on for Azusa’s jet to get near, he looks up at the screen one last time. Like HAL attaining sentience in 2010: ODYSSEY TWO, the last words that form on Kiryu’s screen: