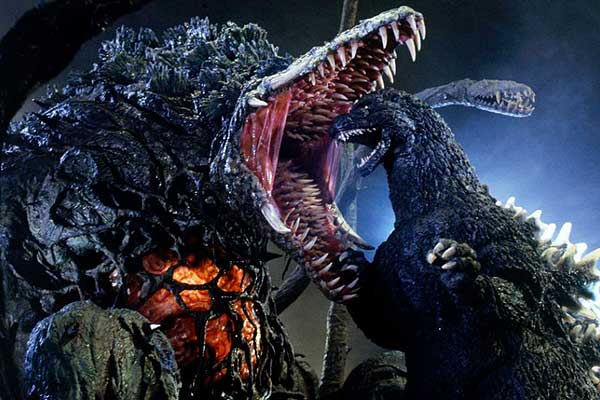 “Hmm, Mrs. Biollante, your second bicuspid will have to come out.”

Godzilla versus a giant mutating rose! And all gardening breaks loose!…

GODZILLA VS. BIOLLANTE opens directly after events of the last film (THE RETURN OF GODZILLA, 1984, the first of the Heisei series), with Godzilla falling into a volcano and getting trapped.

As with all the Heisei series, emphasis is on the pitfalls of genetics rather than nuclear abuse, with Godzilla regarded as a serious threat, rather than the slightly retarded friend of humanity he had devolved to in the Showa series (the last Showa entry being TERROR OF MECHAGODZILLA, 1975).

Dr. Shiragami (Kôji Takahashi, the Japanese William Fichtner) combines the cells of Godzilla, a rose and his deceased daughter to create a giant plant called Biollante. (You mean Shiragami still has his dead daughter’s cells available for experiments? That’s just creepy on a Catholic priest level.) Why create a giant rose plant that is part-Godzilla, part-daughter, all demon-lover? Because – Godzilla movie.

We don’t find out why the terrorists want Godzilla cells, but the scientists are tailed throughout the movie by their assassin, who looks like a young Gene Simmons without makeup, sniping at them, stealing McGuffin briefcases, and trying to write a song better than Paul Stanley.

Plot Point Alert. “If we fail in this experiment to create a toxin to destroy Godzilla, then we’re going to create something worse than Godzilla.” Famous Last Words. Or Famous First Plot Points.

Adding to the stupidity: A psychic chick, Miki (Megumi Odaka), verifies the plant holds Erica’s soul. And everyone believes her, because psychics are real. She says, “Biollante is calling to Godzilla. I can hear her!” as if she’s hearing some ultra-pitched sound that no one else can hear – but we can ALL hear the damn plant mewling.

So… the plant’s a woman, eh? Is that why it has the head of a rose? Petals. Vagina. Get it?

CALLBACK: At one point, small kids in a classroom hold up drawings of what they saw in a collective dream. It is like that moment in CLOSE ENCOUNTERS when the mystic asks where the visitors came from – and a thousand hands come into frame, pointing at the sky. The teacher asks what the children saw, and all the kids’ drawings come up into frame – accompanied by Akira Ifukube‘s chilling Godzilla Theme. They are all drawings of Godzilla! A hair-tingling moment that has no connection whatsoever to anything else in the movie. Director Kazuki Ohmori just saw this dramatic scene in his mind’s eye and created it. Movie’s soundtrack is by Kôichi Sugiyama, except for those few times Godzilla is onscreen and Ifukube’s dirge underscores.

So as Godzilla strides to meet his plant clone girlfriend, Ifukube dominates! The Heisei Godzilla suit looks good, with a ferocious headpiece and nice clean teeth, although Godzilla needs to hit the gym with those thunder thighs.

Fichtner asks, “Did Godzilla come all this way to meet Biollante because he knew she was made from the same cells? They’re identical, not brother and sister – they’re the same creature!” Uh, didn’t the hazy psychic chick just say, Biollante was calling Godzilla?

Biollante’s tentacles encircle Godzilla and they battle, because that’s a chick for you – calling to him in urgent lust, then strangling him with love. Until Godzilla or the effects department get bored, and, like every man, he goes in search of a nuclear power plant to drown his sorrows.

Enter young Major Konoki (Masanobu Takashima, the Japanese Dev Patel), in charge of toy tanks that shoot at Godzilla ineffectually. And keep shooting, until nothing is achieved as usual… Until Konoki deploys the Super X2– Not the Super X2?! MmmYes, the Super X2! Now with Action Grip ®. Shaped like Thunderbird 2, accompanied by jaunty military music, the Super X2 (now with Action Grip ®) is equipped with a mirror that reflects Godzilla’s heat ray back onto him, to give him even more of a radiation-burn-suntan. Also equipped with those trademark Japanese missiles that Do Nothing ™ when fired at Godzilla.

After all the missiles are expended and Godzilla is unaffected, Konoki actually says, “Great, keep it going!” Uh, you mean keep firing those missiles that Do Nothing ™? Luckily, the grunt says, “We’re out of missiles.” Phew. Problems solved? Zero.

As Fichtner adamantly maintains, “Godzilla and Biollante are not monsters! It’s unscrupulous scientists who created them who are the monsters!” Uh, didn’t you just amalgamate your daughter’s DNA with a plant and a radiated lizard? Pot, meet kettle.

Writers Shinichirô Kobayashi and Kazuki Ohmori attempt to write a compelling story, but it’s staged in a juvenile manner. Some of it might be lost in translation, but we can’t forgive the inclusion of the psychic chick. And scenes that look lifted from the goofball Showa series: military chopper drops off psychic and her friend, who warns the soldiers it’s dangerous to stay with them. Soldier says they have orders to stay, but friend insists, “Do as I say before it’s too late!” OK, miss, we’ll just leave, I guess… (Once again, it’s okay for civilians to give the military orders in times of Godzilla or Gamera.)

In place of her rose-head, Godzilla’s girlfriend grows an alligator head, its palate filled full of teeth. (Again, nice metaphor for vagina. So we know what the filmmakers really think of women… You think I’m joking about their attitude toward females? Dev defends the utility of the psychic chick by saying, “Even if she is a girl, she’s a great help to us!” Which means, girls are obviously an obstacle, but this one’s different!)

The final love-hate battle sees Godzilla’s head almost consumed by the toothed vagina. But he girds his loins and tells her he’s going to see other monsters whether she likes it or not. Unlike most psycho girlfriends, Biollante decides to leave, and her body disintegrates, her female spirit rising into the sky via a Photoshop jpg.