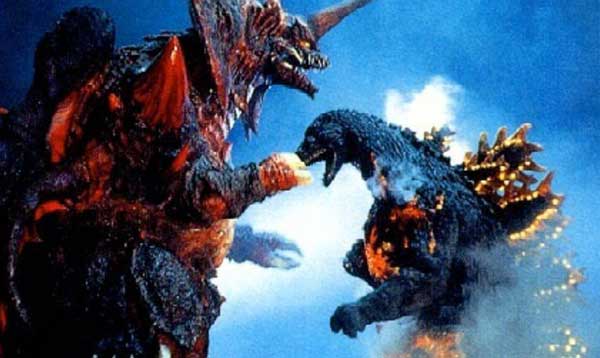 The latest monster technology: one guy standing on top of another guy.

Godzilla’s having a nuclear meltdown!

GODZILLA VS. DESTOROYAH is the last of the Heisei series (that started with THE RETURN OF GODZILLA, 1984), and finds Godzilla battling a monster spawned from the weapon that killed the original Godzilla in 1954 – the Oxygen Destroyer! [dun dun daaah!]

Subtitled “The Death Of Godzilla” (which should give you some indication of where it’s going), the film not only retains a modern look and feel, but also has a sturdy throwback quality, with many refs to the one-and-only 1954 GODZILLA. Dr. Yamane, who wished to study that zilla (Takashi Shimura), appears in many photographs; Dr. Serizawa, creator of the Oxygen Destroyer (Akihiko Hirata), appears in flashback, with his weapon mentioned passim; Yamane’s daughter (Momoko Kochi) is here; and the son of the young boy from Odo village in GODZILLA is the thesis-writing Annoying Kid (Yasufumi Hayashi) who tells the military what to do (as all civilians in Japan are allowed to do during Godzilla and Gamera attacks).

Writer Kazuki Ohmori and director Takao Okawara craft a fast-paced actioner where everything seems to be happening at once, and you do need a little knowledge of the previous Heisei films to stay abreast.

Front and center, Godzilla is back to his old self, tearing through Japan again for no apparent reason, ululating in pain and glowing red. Put a pin in that. Birth Island (mistranslated as Bass Island) is destroyed mysteriously, and the zilla that was hatched in GODZILLA VS. MECHAGODZILLA II (which they originally called Baby, now Little Godzilla) has gone missing from that island. Pin that. Miki the psychic chick (Megumi Odaka, who has been poking her brain into zilla movies since 1989’s GODZILLA VS. BIOLLANTE) is circling in a helicopter bemoaning she has “lost her ESP connection” with Little-G (lady, you lost me at magic underpants). Pin that. Scientists have discovered something called “micro-oxygen” which is somehow related to the Oxygen Destroyer, but instead of killing, makes things grow… thus spawning some crab-Alien monsters that eventually group together and become… Destoroyah!

(By the way, you are reading that name correctly, with the extra ‘o.’ Seems Toho found it impossible to copyright the name “Destroyer” so opted for this extended version – Destoroyah – which, funnily enough, sounds like a Japanese person saying “destroyer.”)

After these and more characters are introduced, we circle back round to the red raging Godzilla – seems his heart is about to give out from radiation poisoning, and cause a nuclear explosion that will wipe out Japan! (Generals face-slap: Not another one! Information revealed to the army not by their team of scientists – but by Annoying Kid. Generals face-slap again: Not another one!) No one seems concerned enough about Godzilla’s destruction to send in toy tanks to ineffectually shoot at him. For some reason, he is considered heroic here, or at the least, a “good guy” rather than a bane. Even though his destruction of toy buildings is non-stop from film’s start to the final battle. 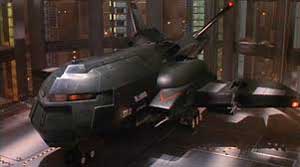 At one point, the military do attack Godzilla – with the Super X3! Not the Super X3! Yes, the super X3!! A cross between the Space Shuttle and the Batplane, armed with freeze missiles, laser cannon and cadmium weapons, this armored plane is so batshit sexy, they film every second of it spinning on its dais as it rises to the roof to liftoff. Go, Super X3, go! But this attack is not to kill Godzilla – it’s to stop him from blowing up from within! And for once in a Godzilla movie – the military is effective! They freeze Godz where he stands. Six hours respite. And I realized why there is such dissonance in this movie – the filmmakers can’t kill a national treasure, no matter the maddening destruction he is responsible for. Godzilla the character is an emotional attachment to the Japanese.

His actual death, when it comes, will be infinitely more dramatic and tragic…

I figured that’s why Junior was waddling around (who looks like a sleek tyrannosaurus) – so that when Godzilla dies, there’ll be another to take his place. But I was wrong! The giant, bat-winged Destoroyah picks Junior up and drops him to his death! To the horror of the psychic chick! A tearful scene when Godz examines the dying body of his progeny.

Now it’s ON with Destoroyah! Firebreathing, lasers (all cartooning effects, integrated well with the live action). Destoroyah is supposedly the Oxygen Destroyer come to life. (We can’t quite figure the logistics of this, but we roll with it.) In this final battle, composer Akira Ifukube uses the majestic theme he composed for the original GODZILLA. And Destoroyah, upon hearing that stabby, odd-time motif, goes down.

Meanwhile, the Super X3 is deployed again to stop Godzilla from exploding. The launch sequence was so good the first time, they show ALL OF IT again. Please, don’t leave out one millisecond! Ah yes, the exterior body, the spinning ascending dais, the switches flicked, the pilots repeating liftoff instructions, the jets firing up… Super X3, you’re just batshit sexy…

The freeze ray deployed, Godzilla flails in agony, shards of light shooting from within him, reaching critical meltdown. And then, while choirs of angels sing him to his rest, in a last scream of defiance, Godzilla… dissolves before our very eyes…

It’s very sad, and manipulated to be so. But this sadness is tempered with the fact that there is a disconnect regarding Godzilla’s role in this film. Is he hero, villain or victim? Unless we tracked his fate from previous films, this stand-alone movie gives us no substance on the big lizard. There is some talk of Mankind’s role in irradiating him, but otherwise, Godzilla is simply an organism that tears through the city with Desto trying to kill him, and the humans – whose city is being destroyed – are trying to stop Desto from killing him, while trying to kill Desto. But he’s going to die anyway with that nuclear meltdown imminent.

Yes, we wept at the death of the original 1954 Godzilla, but that was a compelling story that made sense, with the brutality of Godzilla linked to lashing out at humanity directly responsible for causing him pain. Here, by throwing in the malignant Destoroyah, the motivations and actions of Godzilla are diluted. A fanciful silhouette of roaring Godzilla closes the film. Hope?