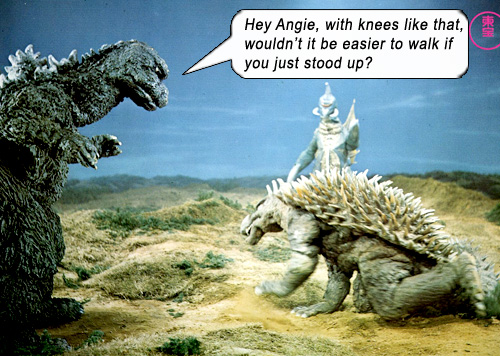 GODZILLA VS. GIGAN might have retained a semblance of watchability if it had continued the mystery thriller tone of its first act.

Young Gengo (Hiroshi Ishikawa) is hired as a cartoonist by a new Children’s Park, that boasts a life-size replica of Godzilla as its office. He meets young Machiko (Tomoko Umeda) who claims her brother is being held captive by the owners. After research into the personnel and company, Gengo discovers the owners are not of this Earth. He and his friends must thwart them and rescue Machiko’s brother. During this quite engrossing mystery thriller, for a brief moment, I thankfully forgot I was watching one of the campier Godzilla installments – until “Action Tape 2” is played.

Another 10-year-old writer on this movie? No, just Godzilla staple Shin’ichi Sekizawa (GODZILLA’S REVENGE, 1969); directed inadequately by another staple, Jun Fukuda (SON OF GODZILLA, 1967). Action Tape 2 is a reel tape Gengo lifts from the Children’s Park, and plays to find any clues on Machiko’s brother. Instead, it reminds us we’re in a crappy movie, as it sends out a signal to Godzilla on “Monster Island,” who for some reason starts communicating to his ankylosaur pal Anguirus by “speaking” in tape-rewind noises. What the hell is going on? We get that they’re communicating, but is it too much to ask that they just roar at each other like normal mutated monsters? Are they saying anything more nuanced than “Let’s go kick some ass!”?

This is why it’s the shark jump: in the English dub version of this film, some delirious producers felt the need to make it EVEN MORE OBVIOUS that the monsters are communicating, and dubbed in – wait for it! – English. Yes, a kind of echo-treated Darth voice issues from Godzilla, and Anguirus answers in kind. If everyone knew the original Japanese version only used “tape-rewind noises” (which was stupid enough) maybe this movie’s reputation might have been salvaged, but the English dub is the more popular worldwide version (with some versions also inserting Japanese speech bubbles!), so to the world at large, Godzilla actually “speaks.” And it is – not surprisingly – the straw that breaks the camelzilla’s back.

Here’s the crazy part: that’s not nearly the stupidest thing that happens in this movie:

The rationale of why these aliens are cockroaches and their “quest for peace” is actually the least offensive aspect of this movie. A smart allusion to cockroaches surviving major planetary extinctions; disguised as humans, their purpose is as “honorable” as any race in the galaxy, INCLUDING SELFISH HUMANS: terraforming the environment for their own benefit.

The aliens summon two giant “space monsters” – Gigan (a laser-eyed hawk thing with blades for hands and a buzz saw on his belly) and King Ghidorah (a three-headed dragon), which go to work destroying models of Tokyo, while toy tanks attack them. While Godzilla and Anguirus interminably swim across the sea, talking tape-noise.

Monster Island Control Unit (snigger) reports, “Godzilla and Anguirus have broken out and are heading towards…” Did you just say, ‘broken out’? How exactly were they being imprisoned on Monster Island? By nothing? I wouldn’t call that breaking out. I’d just call that ‘leaving’.

Monster Fight! Godzilla and Anguirus against Gigan and King Ghidorah! As usual, editing is awful, ridiculous wrestling moves, repeated shots, nonsense powers that work for plot purposes rather than follow any rules. Anguirus stands around getting his ass kicked, not helping one iota, unless you count his ass-kicking as saving Godzilla by drawing attention away from him. (Y’know, I always believed this Anguirus character had four stubby legs like an ankylosaur – but if you look closely, you’ll see the costume makers just didn’t give a fuck, as the guy inside the suit is just crawling around on his hands and bended knees!)

Once again, in a kaiju movie, civilians tell generals what to do – and generals listen. “All defense units dispatch immediately!” What for, sir? We’ll just get killed and burned horribly after being turned into toys.

There’s a blunt message involving technology dependence, and when the aliens are defeated, the leader asks, “How could the machines fail us?” It had nothing to do with machines – you didn’t post any guards on the elevators or anywhere on the grounds, ya dopes!

Godzilla and useless buddy Anguirus waddle back from whence they came, while humans wave to him as if he’s a special pony or something, “Goodbye Gojiraaaaaa!” Ooooh, Gojira is friend to humans! We glad now we let Amehcans drop bomb Nagasaki and mutate lizard! All message of nuclear abuse forgotten. We reappropriate Gojira be loving savior mankind because either we stupid or audience are…

A MONSTER OF FILM
Haruo Nakajima (1929 – Aug 7, 2017)
Known as “the soul of Godzilla,” Haruo played Godzilla from his irradiated beginnings, GODZILLA (1954), for 12 consecutive Showa films, until GODZILLA VS. GIGAN (1972). He also played various other rubber suits (MOTHRA, GORATH, KING KONG ESCAPES) and had a small role in Kurosawa’s immortal SEVEN SAMURAI. 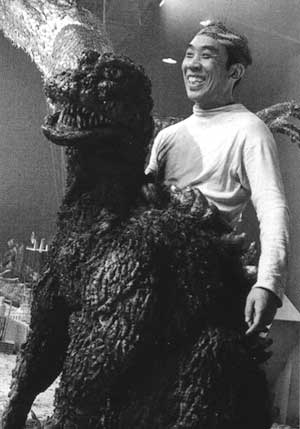