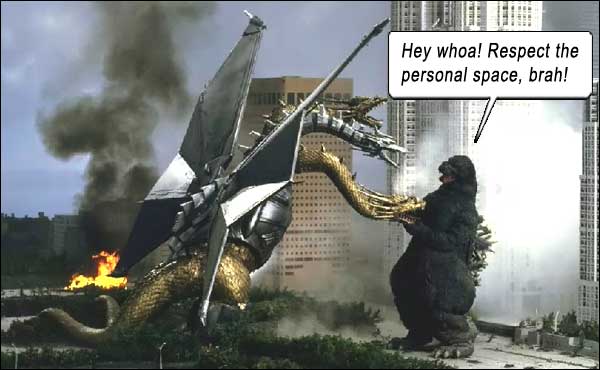 2204 A.D. A two-man sub circles an undersea grave of a gigantic three-headed dragon named King Ghidorah. Computers reveal three necks but only two heads, the woman in the sub telling the man, “It originally had three, when it fought Godzilla in the 20th century.”

Writer-director Kazuki Ohmori (who brought us this movie’s predecessor, GODZILLA VS. BIOLLANTE) pens a convoluted tale of Visitors from the future who time-machine back to 1992 to warn Japan that it has ceased to exist in the 23rd century due to Godzilla’s destruction. They aim to travel even further back in time to World War II, to stop Godzilla being irradiated when he was just a dinosaur (you know, back in 1944 when dinosaurs used to roam free across Japan), and teleport the un-radiated dinosaur forward to 1992 where it will be safe… you know, from all those humans.

Told you it was convoluted. And stupid.

The three Visitors from the future are: an American named Chuck Wilson, playing a mannequin-faced Visitor named Chuck Wilson – no, I’m serious; another American playing a guy named Grenchiko, and a Japanese woman (Anna Nakagawa) who introduces herself as, “Emmy Kano. I’m Japanese.” (Uh, nobody asked.) They request to take three people back in time with them – Terasawa (Kosuke Toyohara), a young writer with a kinda Australian dubbed accent, whose research book about Godzilla (published in the future) they regard as gospel; a dinosaur expert, Professor Mazaki (Katsuhiko Sasaki), and Miki (Megumi Odaka), a psychic chick – wait—what? She oughta be a BIG help!

With production values pretty mid-range (which is high-end for a GODZILLA flick), we wonder why this story keeps sinking lower into imbecility. First question: Why teleport the dinosaur HERE to 1992? Why not to 65 million BC?

One of the subplots involves a soldier from WWII, now a businessman named Shindo (Yoshio Tsuchiya), who claims that a dinosaur saved his troops against American forces. He is regarded as a nutter, but when the Visitors and our modern heroes travel back to 1944, they see this incident take place, as Shindo’s cornered Japanese troops are rejuvenated when a “tyrannosaur” rampages through the Americans, who shoot it down in their retreat. As his men all gather round, Shindo gives praise to the dying dinosaur for saving them.

The movie is basically retconning a tyrannosaur as the progenitor of the totally-differently-shaped Godzilla. Apparently, it was hit by an A-bomb after they left, and it came back to life as Godz. They know they’re talking bullshit though, as they pull out a picture of the dinosaur from 1944 (a Japanese monster suit that kinda looks like a tyrannosaur if you have just woken from a coma) and Terasawa says, “Godzilla’s head is smaller than a tyrannosaurus – but look closely at its eyes and face.” Don’t you mean get drunk first, then squint real hard at its eyes and face?

By the halfway point, the plot is such a mess that we don’t even question the Japanese girl, Emmy, introducing the passengers on the time-machine to “Dorats” – three reptilian puppets with bat-wings that are supposedly irredeemably cute; the Godzilla version of Ewoks, I guess. Emmy: “They’ll be very handy if we get lost, because they can always cheer us up.” Jesus! I thought she was going to say they have powerful homing instincts or something! How stupid of me.

The time machine is piloted by an android, M-11 (Robert Scott Field), who turns from the underhanded evil intent of the Visitors, when he is reprogrammed by Emmy to be cool like Wolverine.

And what is the intent of the Visitors? They want to bring Godzilla back to actually destroy Japan because it is too powerful in the future. Instead, the three Dorats they released get irradiated and turn into King Ghidorah – which is terrorizing Japan when they get back to 1992. And the dinosaur they teleported to the bottom of the sea has turned into Godzilla in the present anyway, because of a downed nuclear sub. But wait: why did they teleport that dinosaur to the sea bed when they wanted to bring back Godzilla to destroy Japan? Who knows? Not the writer-director surely… 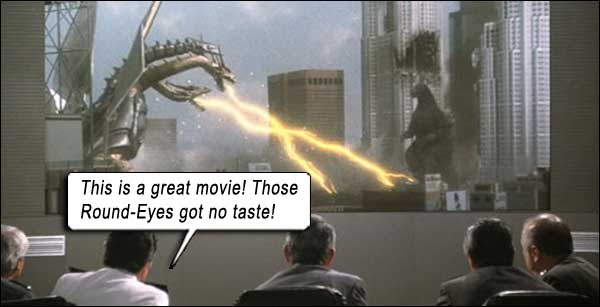 So one hour into the movie, at last Godzilla rises from the sea to destroy Ghidorah. Then goes on a rampage himself, being Godzilla. Better budget means real tanks, and stock footage of real Tomcat jets can attack the process shot named Godzilla. So the feature of these films – Godzilla battling monsters – was delayed until an hour into the film. Then, the usual bashing and breaking and roaring and funny non-physics wrestling moves come into play. The model makers are once again to be commended for their impeccable, intricate work on miniature buildings and structures doomed to destruction from the outset.

Emmy returns from the future inside a King Mecha-Ghidorah, operating its moves (don’t even ask – because I seriously have no clue how this robot Ghidorah suddenly exists!) and both monsters destroy many more buildings in pitched battle before they both fall unconscious into the deep ocean, which happens to be right near the coastline of Japan.

Akira Ifukube is back – the original composer of the 1954 GODZILLA score brings his epic thunder back to Godzilla for the first time since 1975’s TERROR OF MECHAGODZILLA. It’s the one good thing about this movie. And Godzilla’s sharp teeth and gums!

The effects department flex their muscle, with budget for “holograms,” convincing process shots, laser guns like STAR WARS, expansive miniature cities, lots of lightning from Ghidorah and awe-inspiring atomic breath from Godzilla, yet the dubbing is incredibly annoying, everyone enunciating like they’re explaining things to little kids. No surprise, as the simpleton actions in the story can only be appreciated by little kids: for example, the anatomically incorrect tyrannosaur terrorizes the Americans on the beach, so the captain in the ship offshore yells, “It’s a dinosaur – commence firing!” His lieutenant just yells “Fire!” and immediately the ship’s guns go ballistic on the dino – no coordinates, no thought of their men in the target area, no sense on Earth how this even happens instantaneously! Or how about: Shindo the Japanese commander hears his men dying outside, then suddenly he hears large thuds and men screaming (as the tyrannosaur approaches). Without looking outside, without any thought that it might be an earthquake or shells exploding, his first words are, “Dinosaur!” Because that’s the only other thing it could be in 1944 Lagos.

“It’s possible that after they were exposed to radiation, the three Dorats merged into one giant monster named King Ghidorah!” Yeh, that’s totally possible.

One guy plants explosives and says to the other, “Go ahead!” and the second guy presses the detonator saying, “Make my day!” Dirty Harry’s coming for you, Ohmori!

A TERMINATOR moment when M-11 is in a car crash, then exits the burning car with scars on his head and arms that reveal steel endoskeleton under his skin. Then, in a Jeff East-like slomo strut, he runs down the car he was chasing and stops it with his mandroid strength. James Cameron’s coming for you, Ohmori!

The moment that elevates this film starts as a poignant reunion, as rampaging Godzilla comes face-to-face with Shindo on a balcony – the soldier that honored him on Lagos Island in 1944 as he “died” as a dinosaur. There is pause, a flickering of recognition, tears edge Shindo’s eyes, as he sees this force of nature calm for a moment, searching its painful memories. They gaze at each other across time… then Godz fires up his atomic breath and blows the building to hell! This movie’s rating just went up from 4 to 5 Cukees!

You say Ghidorah, I say Tomato…

The way they pronounce King Ghidorah in this film, and the fact that the “King” was not added to many of the earlier English dubs, makes me wonder at Ghidorah’s real name. Just as Godzilla is a Western bastardization of Gojira, I’ll bet this Ghidorah moniker is something totally different as well.

Turns out that Toho bows to the masses and have licensed the name “King Ghidorah” to Western markets. And have reverse-engineered it to sound like its Western epithet. In this film’s old trailer, we hear the Japanese narrator saying, “Kingu Ghidorah” as an obvious pander to the added “King.”

But it started out as: Ghee-do-Rah, or just Ghee-drah. Then the King was added: King Ghidorah. Now, in this film, the pronunciation is Kinga-DOR-a. Making it sound like the “king” phonetic was always just a part of the monster’s name that had nothing to do with actual “kings.” But I have a sneaking suspicion that NO ONE KNOWS what that golden monster’s name is anymore.