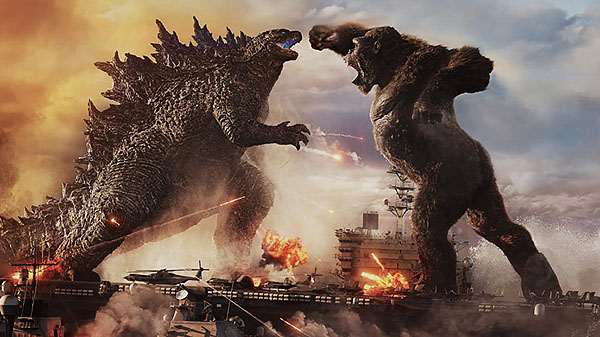 If you came for the monster fights, you died and went to daikaiju heaven; but if you came for anything else – characterization, story, dramatic arcs – and you left disappointed, well I know how old you are – over 12.

Sometimes I WISH I could disconnect my brain and enjoy polished turds like GODZILLA VS. KONG. Because, as promised, the monster fights are excellent, but as soon as that CGI polishing stops, the script is for mugs, pugs, thugs, nitwits, halfwits, dimwits…

Godzilla is running amok. Demian Bichir is a scientist making a robot to stop Godzilla. He needs power from the Hollow Earth (Reason? No reason), so enlists a Hollow Earth archaeologist to go get it, and the archaeologist enlists an anthropologist studying Kong, to entice Kong into leading the way underground. The producers walk in:
“Hey hey hey what’s all this plot? Can you computer nerds make Godzilla pixels fight Kong pixels?”
“Uh, yes, but the screenwriters Eric Pearson and Max Borenstein have written this screenplay—
“Fuck the screenplay, make the lizard hit the monkey!”

And the computer nerds – started polishing… 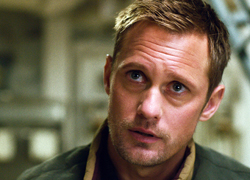 Alexander Skarsgard is the Hollow Earth archaeologist that Demian hires, regarded as a crackpot by the science community – even though Titans like Godzilla and Mothra and all those new ones they invented for the last GODZILLA movie use the Hollow Earth to travel across the globe. And – he was Tarzan – so he knows ape. Rebecca Hall is the anthropologist studying Kong, who begrudgingly allows them to use Kong. No talk of money or contracts or how to make Kong lead them underground. Rebecca has adopted the last survivor of Kong’s home, Skull Island (after a storm killed everyone or something) – a little girl named Jia (8-year-old Kaylee Hottle), who STEALS THE MOVIE from the adults and the computer fights with her brilliant empathy and acting chops. She is a calming presence for Kong. Usually I hate these little-girl-bonds-to-big-beasts – like the Godzilla Heisei Series – in 6 of those 7 films, there was the character of Miki, who had a “psychic connection” to Godzilla. (Reason? No reason) Here, at least the connection is based in sign language (well, as Flash would say: gorilla sign language). Deaf in real life, and playing deaf here, Kaylee is the heart of the movie, and the audience’s connection to Kong. And she conveys 20 more emotions than all the other actors combined. Which means she conveys 20 emotions.

I’m glad Demian Bichir and Kyle Chandler made it back to Earth from THE MIDNIGHT SKY. Didn’t they say in that movie that humanity went underground? — ah, Hollow Earth – it all makes sense now. The Monsterverse IS the Clooneyverse.

Amongst this stellar cast of the A-story there is the chick with obvious breasts, who can’t act; keeps calling Kong a “monkey” disparagingly. Her character just screams “Expendable shrike that gets killed in the second act.” Happens. 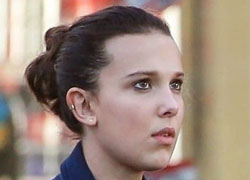 Diametrically opposite to Kaylee is Millie Bobby Brown. Yes, SHE was the heart of the previous Godzilla movie, KING OF THE MONSTERS, and pulled a lot of emotional weight there. Reprising her role here, she is adrift in a subplot that never needs to happen. Looking like a thirteen-year-old wearing her mother’s makeup, swishing about like she’s in some kind of romantic comedy – she’s not miscast, but misdirected. While people are dying and Japan is being annihilated, she’s having a GOONIES adventure with her fat Friend-Zoned sidekick, Julian Dennison. (And I mention “fat” not to shame the poor boy — that’s the device Hollywood uses, to tell us there will be no romantic connection between these two teens. So Friend Zone away!) Along for the ride is a conspiracy podcaster – who pretty much confirms why we want to punch all conspiracy podcasters in the nuts – Brian Tyree Henry… overacting? Power-acting? Alternate acting? I don’t know what you call it but it’s not acting as defined by Hoyle. Again, not his fault – I had to pull up his dramatic scene from IF BEALE STREET COULD TALK just to wash this performance out of my mouth. 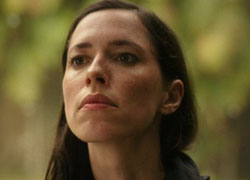 It’s like director Adam Wingard gave this B-plot to an intern to direct. The tone is lost completely every time the movie switches to Millie and Julian and Brian’s wacky adventures. I know what Wingard is trying to do – trying to balance the ferocity of the life-or-death battles with levity. But, ironically, he’s lessening the impact of his battle scenes. Wingard also helmed 2017’s DEATH NOTE, another Japanese property that suffered from a clashing of tones in his finished product. When Wingard said to Screen Crush: “I really want you to take those characters seriously. I want you to be emotionally invested, not just in the human characters, but actually in the monsters,” he forgot to tell the intern that directed Millie Bobby Brown. Although, all the teen boy viewers, won’t be concerned one iota with tone. They’ll be focusing on Millie’s Hermione Quotient – yeh, remember those days, boys, when another Harry Potter film would come out and you’d suddenly realize what team you were playing on? Ahh, so that’s why she’s wearing her mother’s makeup…

Apparently, Godzilla is only going crazy because he can sense there’s a Mechagodzilla being built. So… Demian is building a Mecha to stop Godzilla if he goes crazy, but causing him to go crazy by building a Mecha. So – is he a GOOD guy? But Millie cements Demian as the bad guy when she says without any evidence: “You caused all of this… Godzilla had left us in peace. You provoked him into war.” (Reason? No reason.)

The Mecha is being powered by Ren Serizawa (Shun Oguri) psychically – from a dead Ghidorah skull. See? And you thought I was just kidding when I said the plot makes zero sense. By the way, this is a plot point from the 1993 film GODZILLA VS MECHAGODZILLA II, and it made no sense back then either. And is Ren related to Ken Watanabe’s Serizawa? Script doesn’t say. Is movie trying to connect with 1954’s Serizawa, from the first and greatest GODZILLA film?! And then the dead brain of Ghidorah actually takes over Mecha – because: Ghidorah has a soul? Because he’s Hindu? Because producer said so? (Reason? No reason.) 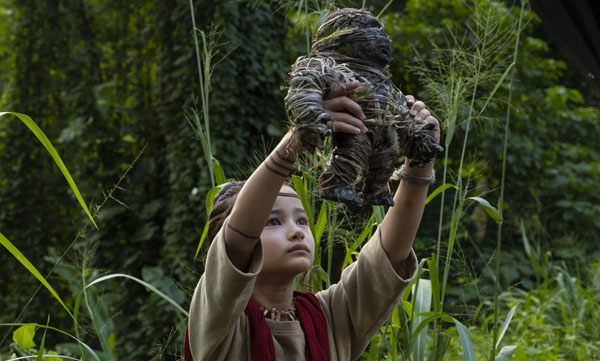 Here’s another example of muddled motivation: Demian says he’s building Mechagodzilla to protect against Godzilla. But haven’t all the titans proven they are maintaining the balance of the Earth? Back when Mecha first appeared in the Showa Era he was a tool of aliens against Friendly Godzilla – a Reason!; in the Heisei and Millennium Eras he was constructed to fight off a Godzilla who was mad bad and dangerous to know – a Reason! But why make Mecha now? Godzilla is helping the Earth, uh, destroying property, uh, angry at something, uh, attacking Kong because, uh, keeping balance…uh, and the filmmakers have retconned themselves into a corner.

Kong finds an axe in the Hollow Earth made from a dorsal spike of a past Godzilla – wait, so he’s a species now? From ancient times? Did anyone proof-read this script at all? Godzilla ends up in Japan, the Glowy District, and shoots an atomic blast down to the Hollow Earth because he senses his ancestor back-spike or something. And Kong comes back up this hole, to Japan – from Antarctica, where he entered. The script is now on meth…

Another fight, which is shock and awe for its technicality and creativity, with some shots designed to look like the creatures are wearing bodycams, to get us right amongst the action. We can really smell what The Rock is cooking.

Kong first met Godzilla in 1962’s KING KONG VS. GODZILLA, when they were both rubber suits. In that film, Kong also got transported by boat and then by airlift, the filmmakers back then, like today, clumsily cramming human interaction into the monster mix. Kong won back then, but considering the fight resembled the Batley Townswomen’s Guild reenactment of the Battle of Pearl Harbor – we ALL lost.

Now, in 2021 – nobody wins, nobody loses. What’d you think, Movie Maniacs? These two intellectual properties – Kong (created 1933) and Godzilla (created 1954) – are so beloved that the filmmakers would not risk alienating either the whole Western World or the whole Eastern world. Or the whole twit world. Instead, both the King Kong mythos and Godzilla mythos have suffered so much reappropriating and retconning and rebooting abuse over the decades that it comes as no surprise when they BOTH become good guys in this very film, and double-team Mechagodzilla.

… because if you came for the monster fights, GODZILLA VS KONG is the best CGI you will ever see on this Hollow Earth; the hair, the spittle, the weight, the shadows, the musculature. It’s 10 stars for the realization of these titans in every aspect, from their choreography, to the smallest details in their design and interaction with their environment. From the Titans’ point of view, it’s a solid story of two alpha predators in nature, forced to put aside their differences to defeat an abomination NOT of nature. It’s almost touching in the final scene, where Kong and Godz wordlessly accept a truce.

Trouble is: the human interaction story is like a first draft with all the plotholes left in – confused, contradictory, clunky, convenient, and cringe. And truly, if they lost ALL the Millie Bobby Brown scenes, that killed the movie’s tone every five minutes, this might have been a reasonable 7-star movie. Instead, they made it for muggers, buggerers, bushwackers, hornswagglers, horse thieves, bulldykes, train robbers, bank robbers, asskickers, shitkickers… and Methodists.

imdb
Word Count: 1,630      No. 1,564      Vid: 41
DUNMORE’S MOVIE MANIA | Movie Review
GODZILLA VS KONG
See this review on Dunmore’s Movie Mania. Consider becoming a PATREON member on my YouTube channel, and SUBSCRIBE and SHARE with all your daikaiju pals! Poffy Approves!