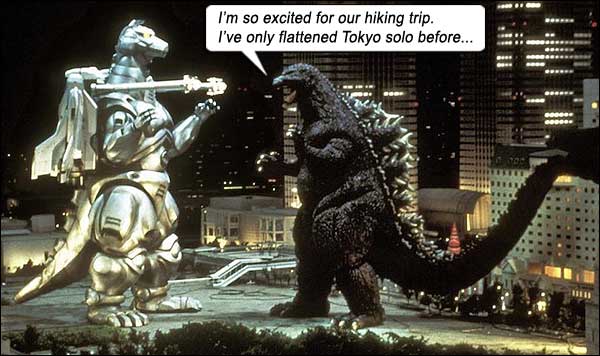 Godzilla takes on another Mechagodzilla, while a Baby Godzilla hatches from a Rodan egg. Rodan transfers his energy to Godzilla via a dry hump, and filmmakers try to squeeze it past us that these creatures are all related to dinosaurs. Yes, GODZILLA VS. MECHAGODZILLA II, the 20th Godzilla film and 5th serious Heisei film, is starting to look a lot like an unserious Showa film.

A sad fact: Original GODZILLA writer-director Ishirō Honda was slated to direct this film, but died in 1993. 1992’s GODZILLA VS. MOTHRA director, Takao Okawara would take the reins. To be honest, Honda’s Godzilla productions (in the Showa series) after his initial 1954 dambuster were ignominious to say the least; the reason his death is so tragic is that in this serious Heisei series, Honda might have redeemed himself. So it is ironic that Okawara directs this Heisei Godzilla like a Showa series yes-man.

A prelude alludes to this film’s predecessor (GODZILLA VS. KING GHIDORAH, 1991), showing Mecha King Ghidorah The Mouthful on the ocean floor, where Godzilla left him. Scientists retrieve some of that Mecha’s DNA to incorporate into their new Mechagodzilla. You’re asking how a robot can contain DNA. Don’t look at me, I’m just reporting facts.

We see Mechagodzilla in a United Nations factory, almost ready to deploy.

Meanwhile, a pteranodon egg is found, mothered by Rodan (a rubber puppet revamped from his Showa days, that isn’t quite a pteranodon, though someone at Toho Company was obviously tasked with retrofitting Rodan into the Family Tree of Reality). Godzilla comes for the egg. Why, we will soon find out, as it is spirited away by scientists, where a Baby Godzilla hatches in their lab, imprinting on one of the girls as its mama – Miki (Megumi Odaka), who happens to have a psychic link with it. Which is very convenient for the plot, and excessively idiotic to anyone with a functioning brain.

And how does a baby godzilla hatch from a rodan egg anyway? Looks like Godzilla’s been sleeping around outside his species again…

Either writer Wataru Mimura has been reading dinosaur books, or Toho told him to jigsaw these “monsters” into the Earth’s ecosystem, as Baby is immediately classified as, “…a Godzillasaurus—” [wait, hang on, while I pull out my dinosaur book that shows every species… uh… let’s see… Gobisaurus, Gobivenator, Gojirasaurus, Gorgosaurus— wait, what? Go back… Gojirasaurus? Oh god. Oh zilla.]

Idiocy continues apace: “This Baby belongs to the Godzilla family…” Apparently, the [snigger] Godzillasaur was the species of dinosaur irradiated by the atom bomb in 1954 that turned into Godzilla. Now they’re rewriting the original GODZILLA! This takes balls the size of a Gojirasaurus.

Godzilla comes looking for his egg baby. So they send out Mechagodzilla, which they call “Mahabali” because it sounds stupider than Mechagodzilla. And Mahabali-Mecha takes Godz to the cleaners. Success at last! Then Mahabali malfunctions. And Godz just pushes him over. So much for naming it after a Hindu demigod.

Cue military. After establishing that the greatest weapon the UN possesses cannot kill Godzilla, they decide to waste taxpayer money by throwing toy tanks at the problem. Never worked before. Why should it work now?

Then – Science happens, by way of that dinosaur book they’re clutching desperately. The scientists discover that Baby-G has a secondary brain in his hips, and surmise that Godzilla does too, planning to incapacitate Godz by attacking that brain. (Akin to the Stegosaurus and larger saurians having a “bundle of nerves” in their hip area acting as transmitter for brain impulses to the rest of their bulk.)

Once again, military are told what to do by civilians, citing the Civilian Godzilla Clause (i.e. “In the event of Godzilla or Gamera attacks, any civilian bystander up to and including a scientist, and down to and including a nine-year-old child with tight trousers, may give orders to military personnel up to and including the rank of four-star general.”) As Godzilla approaches, the crowd cry out, “Godzilla’s coming!” and the army guys look up in surprise to see him… Wait, the Army didn’t have any radar or air recon to tell them of Godzilla’s proximity? Their distant early warning is the crowd of spectators at the scene? No wonder anyone can tell them what to do.

So the Mecha shoots out Godzilla’s hip brain and Godz goes down. Meanwhile Rodan has been causing a ruckus trying to eat Baby-G and is shot down. The telepathic chick Miki is given x-ray glasses by the military (I won’t even comment), written into the script only so she can see that Big-G’s “hip brain” has been damaged for plot purposes.

Then it gets REALLY stupid.

Baby-G screams to Rodan, awakening him from the sleep of death. Upon coming back to staggering life, this creature that was constantly warring with Godzilla flies over to him and lands on him in a doggy position (oh, so Godzilla is versatile!). Rodan “gives his energy” to Godzilla (I bet!), mending his hip brain, which the civilian chick in the x-ray specs verifies to the military. And they, of course, believe her. Because, I presume, there was some really logical reason the general in charge of the assault couldn’t use the x-ray specs… 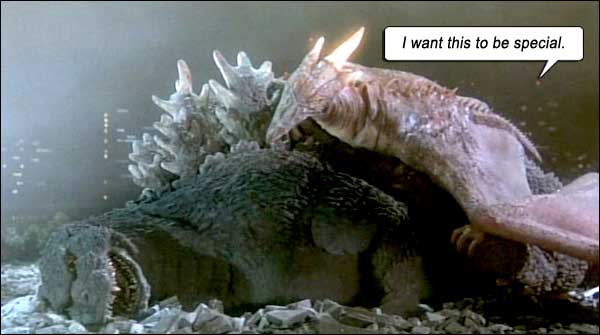 It’s one thing when Godzilla triumphs over a monster threatening Japan, or even if he inadvertently saves mankind (in SMOG MONSTER); he can indirectly be considered a hero. But why – WHY – is he cheered on as Hero when he destroys Mechagodzilla? This machine is inhabited by good people trying to rid the city of the destructive Godzilla himself! The heroic music (Ifukube’s power theme) and the dynamic way the battle is shot goes against all logic. Whose side is everyone on? Even the Mecha controllers are rooting for Godzilla to win!

Miki tearfully tells Baby to go with Godzilla, “You’re not safe with us. I won’t be able to take care of you. I’m so sorry!” Why, what were you going to do with it? If you trained it while it grew, wouldn’t it be a fearsome ally? If it already understands Japanese, that’s a pretty useful start. “Go with your mother, where there is no war, weapons or hatred. Only love. Only love.” Shyeh, royt. It was love that made Godzilla knock down Tokyo again. They’re not even THINKING anymore as this shit falls out of their heads straight onto the script.

One of the military guys looks on as Godzilla and his/her progeny waddle out to sea, like the ending of GORGO: “This is an image of love and care. It’s been proven that Live and Let Live is the best motto.” Yes, but the reason you were trying to kill Godzilla in the first place is because Live and Let Die is HIS motto. Have all you people caught dementia in your old age? If you really don’t want to kill off this property, just say so. Don’t go beating around the bush pretending these killers are mankind’s pals. You’re getting caught up in the mentality that killed the Showa series.

Or maybe you’re getting lost in translation. Some of the subtitles are priceless:

According to me, they have inculcated this Godzilla movie somehow.

An irradiated dinosaur by any other name: Gojirasaurus!
Seems paleontologist/Godzilla fan Kenneth Carpenter discovered a seemingly unclassified theropod dinosaur species in 1994, classifying, publishing and naming it Gojirasaurus in 1997, after Toho’s giant irradiated lizard.

Nowhere near the size or shape of Godzilla, this small carnivore’s bones were later discovered as belonging to various other dinosaurs, making this Life-Imitating-Art name look as silly as one of its namesake’s movies.
Ref: Wikipedia 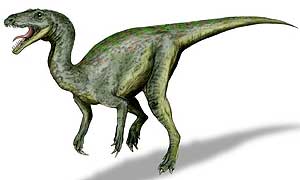 At the time of the movie, this discovery had not yet been made, so they are talking pure bullshitasaurus in GODZILLA VS. MECHAGODZILLA II. Carpenter makes them look credible only in retrospect. And then, not for very long.