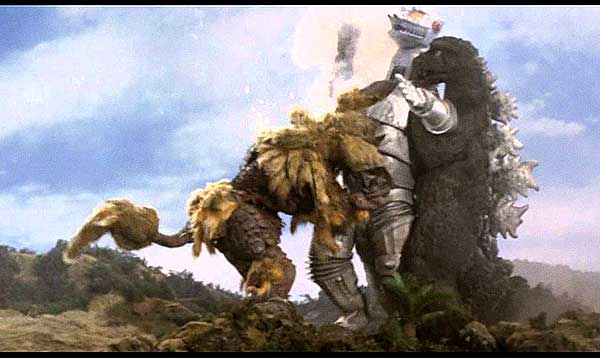 Okay you guys, whatever it is you’re doing – can I join in?

In GODZILLA VS. MECHAGODZILLA, Godzilla’s name may be in the title, but he’s nothing but a bit player.

The real star is King Caesar.

When a mechanical-Godzilla starts destroying Japan, Godzilla gives it the ole college try to stop it, but is routed by Mechagodzilla’s lasers and sensual finger missiles. Enter the mythical guardian King Caesar to… also get his ass kicked by Mechagodzilla – until Caesar and Godz do the Marvel Team Up and annihilate Mechagodzilla.

Once again, we almost forget we are watching a “Godzilla movie” during the first act of GODZILLA VS. MECHAGODZILLA. Writer-director Jun Fukuda (5th Godz film) and co-writer Shin’ichi Sekizawa (10th Godz film) can really put an interesting plot together. Unfortunately, being a Godzilla film, they have the license to color into outlandish territory, so insert plot elements that just busy the storyline rather than make it better.

For example: Godzilla appears to destroy Japan again for no reason, with strange hissing noises instead of his usual hawk-elephant roar. Anguirus the ankylosaur-thing surfaces to fight Godzilla. Spectators ponder on why Anguirus, “Godzilla’s friend” is attacking him. Anguirus exposes something metal under Godzilla’s skin. Intriguing. Suddenly, another Godzilla rams up through the Earth to take on the hissing Godzilla. This one has a hawk-elephant roar – it’s Big G himself! Which means the hissing G is an impostor! And Big G burns off the hissing Godzilla’s skin to expose a mechanical Godzilla-shaped robot! All these elements are fine storytelling. Next, we discover the “Mechagodzilla” is being controlled by aliens intent on conquering Earth. We can still roll with this plot development, because this level of stupidity is now passé with Godzilla films… 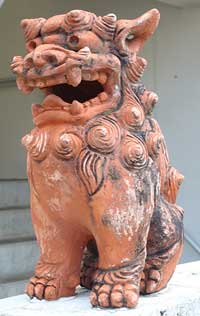 There is a Shisa statuette that our heroes have unearthed. (Shisa are “guardian lions” that resemble Japanese “lion dogs.” Due to English dubbing, the name Shisa was eventually bastardized to “King Caesar.”) Some guy is constantly trying to steal it from our heroes. When he fails at his attempt, our hero rips off half the thief’s face – and the thief is an APE underneath; he looks exactly like the gorillas in the 1968 PLANET OF THE APES. This is where the writers took too much license. So the apes are ALIENS that want control of King Caesar, a monster summoned by the statuette. See what I mean by making the plot busy for no reason?

Unless something was lost in translation, there is no plot development that justifies the aliens being damn dirty apes; even if the filmmakers wanted to convey the aliens were not just “Japanese people,” couldn’t they have made them truly “alien” to any life-forms on Earth? The only marginal reason I can think of is that all five original APES movies (the Arthur P. Jacobs series) had been released, and there was probably some remnant of ape-mania in the filmmakers and the makeup department…

Meanwhile, King Caesar is getting a good rap, as our heroes tell of his legend as a guardian that would return to fulfill a prophecy. Our heroes aim the statuette’s eyes at a mountain during a freak sunrise, and lasers from the eyes destroy the mountain to reveal – King Caesar in real life sleeping beneath. Resembling the lion-dogs of legend, King Caesar roars his awakening, rising 50 feet high like the god he is and… oh, it’s just a guy in a rubber suit.

Some kinda guardian! He gets his ass handed to him by Mechagodzilla (which makes us wonder why the ape-aliens wanted him in the first place). Only the assistance of Godzilla saves KC’s bacon. 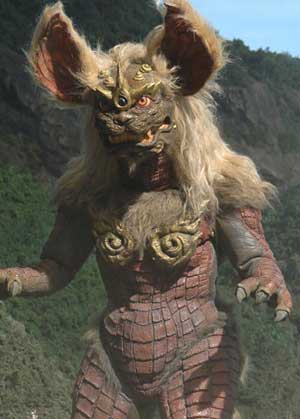 King Caesar: when the legend is better than the rubber reality. What’s with the cinnamon bun bra? Cinnabra?

In retrospect, we can speculate that the actual rubber suit never did match up to the somber foreboding of the statuette, and the headpiece looks goofy rather than fearsome. King Caesar would only appear in one more Godzilla film – FINAL WARS, as a larger, more soccer-playing animal. (Yeh, right?)

Another useless plot point: the ape-aliens monitor the statuette opening the mountain on the sleeping King Caesar, and send Mecha to “destroy King Caesar while he sleeps.” Like jilted girlfriends, if WE can’t have him NO ONE will! Some empath chick has to do a song and dance number to wake King Caesar. And Mecha (who can FLY, by the way) takes so long to STOMP to the mountain, that the chick finishes her routine and wakes Caesar before Mecha can get there!

The story is somehow kept interesting apart from the three major monster fights. So much is going on with the humans and ape-aliens, Godzilla is hardly necessary at all, as King Caesar could just as easily have been written as sole savior of the city. Godzilla seems an afterthought to sell tickets. 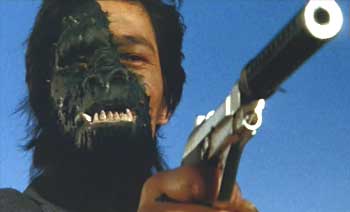 Mecha has so much weaponry (finger missiles, eye-ray, chest-ray, mouth-ray, foot missiles, with a head that can rotate 360-degrees and fire on targets all around it) that he routs both Godz and Caesar in a first battle, as they fall over one another doing Three Stooges impersonations. Godz even starts spurt-bleeding from the neck like his carotid is hit! How is he still alive?!

Eventually, Godzilla jumps the shark by making himself magnetic and drawing Mecha to himself, to twist its head off — but wait! (forget even the idiotic “magnetic” part) — it was shown the Mecha could turn his head 360-degrees! How then, did Godzilla twist it off?! And what about the missiles and lasers? Did Mecha run out? So when Godz is holding Mecha from behind, like a WWE wrestling maneuver, and Caesar is ramming him from the front, are all Mecha’s weapons spent? Or is he just enjoying himself too much to do anything about it?