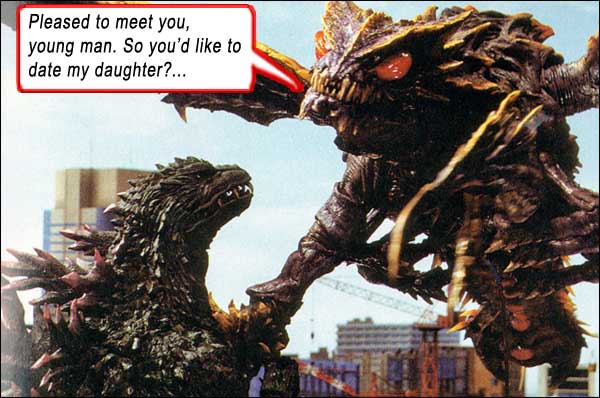 Where science and stupidity collide.

Japan is sick of Godzilla. They want him dead once and for all, creating a black hole to shoot at him. From space. Yes, the new Millennium Godzilla looks great, but the idiocy is still the same.

In a cold open, we see supposed news footage from 1954, showing Godzilla raiding Tokyo over narration about “a nuclear bomb bringing it to life – what can humans do?” – but you can’t fool us, Toho Company: that’s not footage from the original Ishiro Honda film, that’s the new Millennium Godzilla with the ferocious headpiece. Then footage from “1966” showing Godzilla destroying Japan’s first nuclear plant (but again, it’s the new headpiece – all these “flashbacks” are new footage, so that it looks like the same Godzilla through the years), though I am not sure which movie they are referencing, as the only Godz film released that year was the soporific GODZILLA VS. EBIRA (THE SEA MONSTER), which did feature a nuclear plant, but not Godzilla feeding on it. Anyway, narrator gaslights us that this prompted Japan to give up nuclear power and create clean energy from plasma. Whatever that means. As long as Godz isn’t attracted to it.

One more flashback: Godzilla attacks in 1996 – attracted to the plasma – and a young soldier, Tsujimori (Misato Tanaka), is responsible for the death of her commander during the battle. Her chilling cry of anguish will explode into the opening credits…

Immediately we see the above-average production values have been retained from the previous movie (GODZILLA 2000), with impressive process shots, reasonable acting and a ferocious-looking Godzilla (though he really should work on his thunder thighs).

Further, for the first time in a Godzilla film, the hero – is a woman! Not a B-list psychic schlepping around behind the men, or a tribeswoman for eye-candy, or a non-personality mother. Misato Tanaka plays a Soldier (fulfilling one of the planks of the Godzilla Support Cast: Scientist, Soldier, Politician, Annoying Kid), and she wants revenge. She leads the military company called G-Grasper (and I find it hilarious that it’s emblazoned on their vehicles in English! Sounds kinda… molesty) and recruits the Scientist, Kudo (Shôsuke Tanihara, the Japanese Keanu Reeves), who comes in and starts telling the military what to do, because that’s allowed during times of Godzilla. 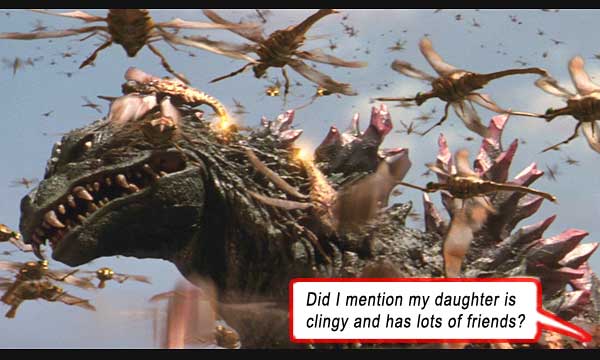 New director Masaaki Tezuka knows his hero shots (he would go on to direct two more Godz films), and is teamed with Godz writers Hiroshi Kashiwabara and Wataru Mimura, who insert some emotional moments into the laughable plot, though shy away from what should be an audience-pleasing pairing of Keanu with Tsujimori, keeping them Just Friends, even though he’s the kewlest science nerd in the facility and she is obviously waiting for someone to chisel her ice down to that glorious pearbottom.

The writing and directing come together in a well-constructed scene where Tsujimori ends up clinging to the dorsal spikes of Godzilla as he rides the waves. Not only is it visually inventive, it directly parallels that other fanatic from literature – Ahab riding Moby Dick. The same context: a hunter face to face with, yet powerless against, his sworn prey.

There is another scientist – also a woman! – who develops the plan to entrap Godzilla in a black hole. I keep mentioning the female factor because even in 2000, it is against society’s grain. Annoying Kid actually notes to Tsujimori, “You are a woman. Why are you fighting Godzilla?”

Or maybe because it’s a woman, it’s the stupidest plan in the history of physics. Construct a black hole 2 meters across, shoot it at Godzilla from space, and suck him into it. That’s the plan? Really? Where to begin to educate these SCIENTISTS? (And it doesn’t help when they pronounce “black hole” in English, making it sound like “brack hole.” Oh god, racial stereotypes perpetuated or just reality in pronunciation?) Not one real life scientist in Japan thought to raise their voice and tell these filmmakers obviously unversed in the most basic astronomical physics, that the energy needed to compress matter into the denseness of a black hole is far more than the energy output of anything mankind could devise. Or that to move such an amorphous, untouchable object (i.e. “shoot it at Godzilla”) the energy required would again be unfathomable, not to mention the gravitational effects of this hole on everything around it in a radius of, say, oh, the Milky Way Galaxy. And what happens after Godz is sucked into it? Does the hole just hang around Japan being polite? Of course, the whole Boolshittus Maximus endeavor is explained in a One-Line Plothole Fix: “The discovery of plasma energy made this possible.”

Surprisingly, they need Keanu’s help for this. Not surprisingly, everything goes to shit. 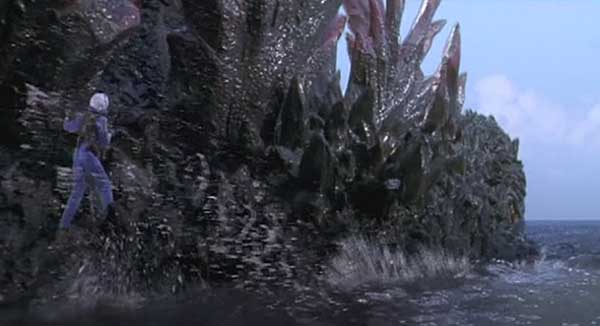 “From hell’s heart I stab at thee; for hate’s sake I spit my last breath at thee. Ye damned whale-gorilla!”

When they test-shoot the black hole at a schoolhouse, to protect their eyes, they wear sunglasses. Because that’s just the kind of protection you need to shield your eyes from a spacetime anomaly that jars the laws of physics loose at its event horizon. Oh, and they stand about 50 feet from the blast. Because that’s far enough from a time-dilating atom-crusher that throttles mathematics at its entropied core.

Annoying Kid is only used as a device to witness the trespass of a giant bug into our universe through the artificial wormhole, which lays an egg then flies back into the wormhole. (Now, *I* used the word wormhole here because it makes more sense, seeing as the writers obviously created a rift in spacetime that alien beings can travel across. But they didn’t use that word – they specifically say “brack hole,” because the lady scientist’s reasoning is that “nothing can escape it” – then what is this giant insect doing flying out of it then flying back into it?!) The egg hatches into thousands of car-sized dragonflies, and one big mother – Megaguirus, whom I thought was going to be an ankylosaurid like Anguirus, only MEGA. But she’s a queen dragonfly bigger than Godzilla.

GODZILLA VS. MEGAGUIRUS misses an opportunity at a thoughtful conundrum: just as they’re about to start raining black hole fever down on Godzilla – the dragonflies attack him (complete with chilling theme music by Michiru Oshima), precipitating the appearance of Megaguirus. I thought they would explore the plot of keeping Godz alive so that he can take out this new threat to Tokyo – the dichotomy of villain as hero. But no. The Politician actually has a very logical idea – kill Godzilla and Megaguirus both with the black-holinator!

When they actually fire at Godzilla, he escapes the blast by diving underground! I guess 10 feet below the soil should shield you from a gravitational molecule-stripper that devours stars.

That leaves the third act for the feature battle between G and M. And it’s a little soporific, mainly because these filmmakers are not using the best tech to convey the speed and centrifugal forces of flight in Mega, so though it’s a sincere rendition of Godzilla, the logistics of flight in Mega are stunted from the get-go, although the music is evocative.

Then the satellite carrying the black hole machine malfunctions and falls from space. Simply falls straight down – no following an orbit as it augurs down to Earth, no – blandly drops, ignoring all physics, like the spaceships in STAR TREK when they stall. Meaning, if we thought the filmmakers knew nothing about space mechanics – now we’re sure.

After Godzilla fries Megaguirus, the G-Graspers manage to get off one last shot at Godzilla with the black hole satellite, while it falls. In a scenario that just screams self-sacrifice, the pairing of lovers, the triumph of science, and the death of Godzilla… none of that happens.

It’s like this movie’s plot just simply disappeared into a brack hole.